How Otto Warmbier Made It Out Of North Korea

Seventeen months ago, just after dawn on Jan. 2, 2016, 21-year-old University of Virginia undergrad Otto Warmbier arrived at the airport in Pyongyang, the capital of North Korea. He had spent five days on an organized tour of the authoritarian state with a group called Young Pioneer Tours, which advertises its destinations as places “your mother would rather you stayed away from.”

He was slated to fly from Pyongyang to Beijing and then down to Hong Kong, where he would meet his classmates. But he never arrived. As Warmbier was checking into his flight, he was led away by two North Korean officials. Onboard the plane, a North Korean official told one of his tour guides that Warmbier was “very sick and [had] been taken to the hospital,” and that he would be released “tomorrow… or next week.”

He had not been taken to the hospital: he had been arrested for allegedly trying to steal a propaganda poster from the Pyongyang hotel where his group was staying, which in the eyes of the totalitarian North Korean legal system constituted “a hostile act” against North Korea. In a televised confession several weeks after his arrest, he tearfully admitted to trying to bring down “the foundation of [North Korea’s] single-minded unity.” (Experts believe the confession was written for him.) He was sentenced to fifteen years of hard labor.

On Tuesday night, after a year and a half, Warmbier arrived home in Ohio. He returned to the U.S. in a coma, or so North Korean authorities told U.S. diplomats when his release was negotiated in the last two weeks. U.S. authorities have not confirmed his condition. In any event, his is a troubling, perplexing story — the latest grim chapter in the history of U.S.-North Korea relations, which have grown increasingly tense in recent months.

A person believed to be Otto Warmbier is transferred from a medical transport airplane to an awaiting ambulance at Lunken Airport in Cincinnati, Ohio, June 13, 2017.
Bryan Woolston—Reuters

Warmbier was one of 5,000 Westerners who travel to North Korea each year on structured tour programs closely monitored by North Korean authorities. (Tourism brings up to $43.6 million each year — an increasingly crucial sum as the country’s economy continues to suffocate under international sanctions.) He landed in Pyongyang on Dec. 29, 2015 and spent the following days sightseeing with his group. They spent New Year’s Eve in Pyongyang, drinking and watching fireworks in Kim Il-sung Square before returning to the Yanggakdo International Tourist hotel, a lodge for foreign visitors situated on a small island on the capital’s Taedong River. (Gareth Johnson, Young Pioneer’s managing director, declined to comment to TIME on Wednesday morning in “the interests of their privacy and the well being of Otto.”)

No one on Warmbier’s tour can confirm that he did sneak off to a restricted staff-only floor of the hotel, as North Korean authorities later alleged. “Otto wasn’t problematic or politically outspoken,” one member of his tour told TIME in April. “He acted like a normal 21-year-old on holiday. To be honest, if I had to pick a tourist in that group to be involved in an incident, he would have been at the bottom of the list.”

Many see him as a victim of circumstance, or rather of bad timing. The day before Warmbier’s arrest, in a New Year’s Day address to his subjects, North Korean leader Kim Jong Un said that the country was prepared for a “merciless, holy war” if North Korea was provoked by “invasive” foreign parties. Five days later, the country conducted its fourth nuclear weapons test — one of several acts of provocation since the 33-year-old Kim took office after his father Kim Jong Il’s death in December 2011. If the U.S. was going to respond aggressively to such actions, it helps North Korea to have a bargaining chip.

Shortly before Warmbier’s sentencing in March 2016, his case came to the attention of Bill Richardson, the former governor and congressman from New Mexico who also served as President Bill Clinton’s ambassador to the United Nations. Since leaving public life, Richardson has worked to negotiate the release of American prisoners and hostages in North Korea and elsewhere. In the weeks after North Korea’s fifth nuclear test on Sept. 9, Richardson’s diplomatic initiative, the Richardson Center for Global Engagement, quietly sent a delegation to North Korea to discuss, among other things, the possibility of Warmbier’s release.

But on official diplomatic channels there was apparent radio silence, and until very recently Warmbier’s future seemed bleak. This April, tensions between the U.S. and North Korea escalated to the highest levels since the Korean War, after it was reported that Pyongyang was preparing for another nuclear test. It was the early days of President Donald Trump’s presidency, and experts were unsure how the famously truculent leader would confront the situation. That month, Otto’s parents, Fred and Cindy Warmbier, sat down with Tucker Carlson on Fox News to lament the fact that neither administration — Obama’s or Trump’s — had done much to reassure them that their son would be released. (The Warmbiers have politely declined to comment to TIME on several occasions.)

But new reports suggest that behind closed doors, Trump’s State Department was working to free Warmbier. According to the testament of a State Department official given to CNN, Secretary of State Rex Tillerson was instructed in February to secure the release of all American hostages in North Korea. Last month, a group of U.S. diplomats and experts, among them the State Department’s special envoy to North Korea Joseph Y. Yun, traveled to Oslo, Norway for a series of informal talks with North Korean officials. It was decided there that Swedish diplomats in Pyongyang would be granted access to the four Americans currently in North Korean custody, according to news reports.

On June 6, two weeks after what would have been Warmbier’s graduation from the University of Virginia, Yun received an urgent request for a meeting with Pak Kil-yon, North Korea’s representative to the United Nations, in New York, according to the Washington Post. Yun was told that Warmbier had been in a coma for more than a year: he had allegedly contracted botulism shortly after his trial and been given a sleeping pill; after that, he reportedly never woke up.

Fred and Cindy Warmbier stand in their home.
The Washington Post/Getty Images

In the days that followed, Tillerson met with Trump and then instructed Yun to travel to North Korea to secure Warmbier’s release on humanitarian grounds, according to CNN. The delegation arrived in North Korea two days ago, on June 12, and Warmbier was medically evacuated from the country on the evening of June 13. The medical convoy landed in Cincinnati around 10:15 p.m. local time; the Post reports that he was taken from the plane with a shaved head and a tube in his nose. He was then taken by ambulance to a local hospital, where he will receive treatment.

There are now more questions than answers. “The North Koreans have a lot of explaining to do — they may have violated the Geneva Convention,” Bill Richardson said to TIME in a phone call on Tuesday. “It depends on Otto’s condition and what the North Koreans say about what happened, but if Otto is in a coma or damaged, there will be pressure in the Trump administration to act.” 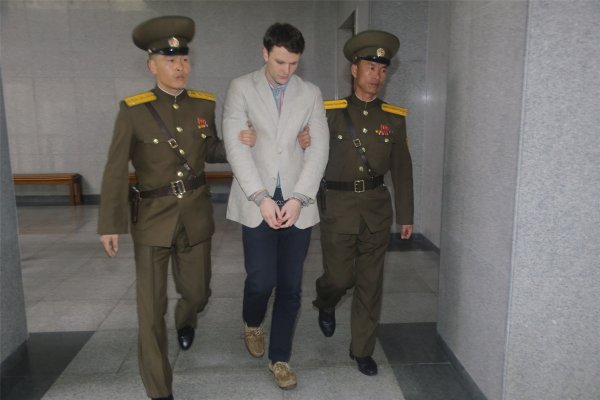