Tom Cruise has been around the Hollywood block. But there was one thing that the Mummy star had never seen before: a series of viral memes of the action hero clinging to a things. During a video interview for BBC Radio 1, Cruise and reporter Ali Plumb reflected on some of his most iconic film moments, before jumping into the important stuff: his viral fame.

“Are you aware of the #TomCruiseClinging off things meme?” Plumb asked. When Cruise admitted he was not, the reporter busted out some of his favorite shots on his phone. There was Tom Cruise clinging to Free Willy in midair; there were a number of Tom Cruises arranged artfully around the fluffy face of a cat; there was Tom Cruise hanging on to the edge of an elevator shaft while Darth Maul plummets to his doom; there was a tiny Tom Cruise chilling off the side of Nicolas Cage‘s larger-than-life face. During this display of Photoshopped meme images, Cruise simply could not contain himself.

“That’s fantastic,” he exclaimed. “Oh my god, why didn’t anyone show me that before? That is hilarious!” In fact, Cruise ended up in such knee-slapping hysterics that he had to ask for a glass of water to regain his composure.

The #TomCruiseClinging meme has actually been around since 2015, according to Know Your Meme, when Photoshop wizards began working their magic on a still of Cruise hanging in midair from the trailer of Mission Impossible: Rogue Nation. In the stunt — which Cruise performed himself, with no green screen — he is clinging to a jet as it takes off, making it one of the most dangerous things he’s ever done, by his own admission.

Luckily, his willingness to push his own limits has resulted in internet infamy. Thanks, memes, for keeping a legendary scene alive — and thanks for giving Tom Cruise a good laugh. 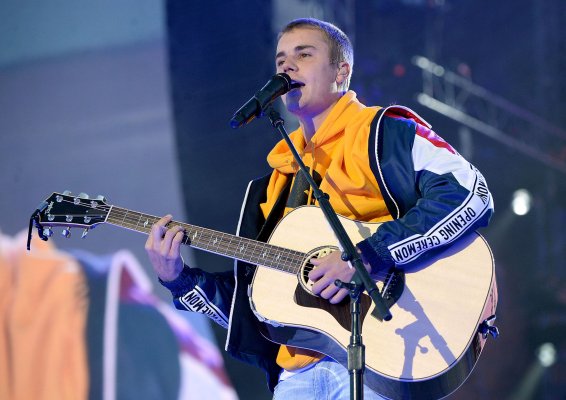 Fan Throws Water Bottle at Justin Bieber After He Says He Doesn't Know the Song 'Despacito'
Next Up: Editor's Pick