During a Super Mario Odyssey presentation at E3 that included a hands-on session with the company’s flagship 3D platformer, due October 27 for the Nintendo Switch, producer Yoshiaki Koizumi and director Kenta Motokura took questions from the press.

Here, in addition to TIME’s hands-on preview of the game, is what they told us.

It was designed with the Switch’s handheld mode in mind

“I think there’s one thing that does lend itself to being played on a system that can be taken out on the go, but with the addition of the Power Moons and large number of them that you can collect, if you have two or three minutes and you’re on the go, you can collect Power Moons because they’re hidden everywhere,” says director Kenta Motokura. “I think the ability to either follow the storyline or just collect Power Moons over a short period of time does lend itself to [playing on the go].”

It’s about what’s right in front of you

“This is an experience that I don’t think is just relevant to people who grew up in Japan, but kids who grew up anywhere who have the experience of playing in parks and playgrounds,” says Motokura. “And relative to their size as children, there was a certain kind of concentration of play elements and playgrounds different from what you experience as an adult. When I think about comparing Zelda and Mario in those terms, I think of Zelda as this really big world where you see something far off and you want to try to figure out how to get there, whereas the kind of worlds that we’re creating in Mario are about the thing that’s right in front of you and how you interact with that.”

A throwable cap was integral from the start

“As far as the hat action goes it was included in one of the prototypes the staff had come up with,” says Motokura. “It was part of the game right from the beginning. We have several different themes that arose from those prototypes, and one of those was focusing on the Joy-Con [motion controls].”

“You can play it either way, with the Joy-Cons attached or detached, but playing with them detached, and using some of these motion controls, we believe it feels a bit better, we’ve arranged for it to be a more positive experience,” says Motokura. “As far as instructing the player on the different controls, whether playing docked or undocked, there are some things we’re not able to show you today, but that explanation or way of teaching players is in the game.”

“Because throwing the cap is a new action, we want players to feel empowered or encouraged to go ahead and try this action wherever they feel it might work,” says Motokura. “There are certain topographical hints near areas where you’re going to be looking, and you might say ‘That looks like some place my hat might reach or might attach to.’ So there are some hidden elements like that, that players will start to get used to.”

“The game’s structure isn’t designed so that you have side quests, it’s more that as you’re traveling around the different kingdoms or areas, you’ll find something that attracts your attention and there may be some sort of a quest around that, but it’s all about going and finding and collecting the Power Moons. You need a certain number of Moons to unlock a new kingdom, so some of these what we might consider side quests, are solving some issue within a kingdom, but the real goal of that is to provide you with enough Power Moons to move on with the main storyline.”

You can’t capture every enemy

“There is a rule where if you come across enemies wearing hats in the game, you’re not going to be able to capture enemies already wearing hats,” says Motokura, referring to the mechanic whereby Mario throws his hat at hat-less enemies to temporarily possess and assume their range of behaviors.

It may in fact be a buddy adventure

“Mario has always been a hat-wearing character, but because of the new action involved in this hat, we decided to make it into a character,” says Motokura. “Part of it was we wanted to have someone Mario would go on this adventure with, and there are more details about this that we’ll be revealing at a later date.”

It has multiplayer, but Nintendo’s not talking about it yet

“This is a game for the Nintendo Switch, so probably,” says Motokura, reacting to a question about multiplayer possibilities. “But I’m afraid we can’t share anything about that today.”

“If you look over all the different games in which Peach has appeared, there are quite a lot in which she has taken an active role in the past,” says Koizumi, reacting to a question about gender empowerment in games. “For example in Super Mario 3D World she was a playable character. And I think I know a couple of people who really enjoyed playing her in the Smash Bros. series as well. So we think of her as a very strong character. But some people do get kidnapped on occasion, and if I had to make a comparison, I’m more likely to get kidnapped than she is, but certainly it can happen to anyone.”

The game’s retro-future city is of no particular era

“In our game design we’re focused on the gameplay elements themselves and how the game plays out. We looked for art styles or level design that works well with that gameplay. There is no actual setting in a specific time period,” says Motokura. “But another bit of information is that Pauline makes an appearance, and we think that this is tied in with her character, so there’s some back and forth exploration going on in that area as well.” 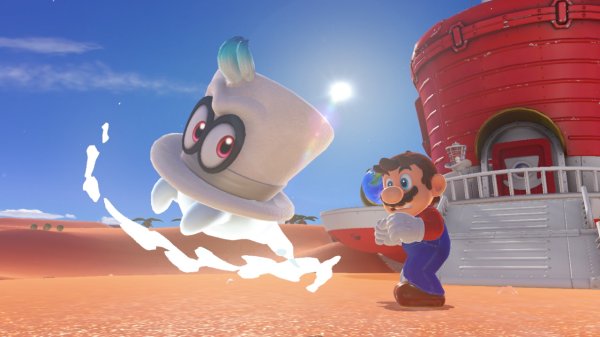 'Super Mario Odyssey' Is About To Turn the Mario Series Upside-Down
Next Up: Editor's Pick