My Mother Died at Sandy Hook. Megyn Kelly Has ‘Profited Off My Pain’

Erica Lafferty, whose mother Dawn was principal of Sandy Hook Elementary and killed while trying to protect her students, addresses the third evening session of the Democratic National Convention at the Wells Fargo Center in Philadelphia, Pennsylvania, July 27, 2016.
NICHOLAS KAMM—AFP/Getty Images
By Erica Lafferty

When I heard that there was a shooting at Sandy Hook School, I immediately knew my mother was dead. My mom, Dawn Lafferty Hochsprung, was the principal of Sandy Hook. On Dec. 14, 2012, 20 six- and seven-year-olds and six educators were shot and killed there. My mom, a 47-year-old woman who stood 5 feet and 2 inches tall, died charging at the gunman.

That’s who my mom was. She was fiercely protective of the people she loved, and that included every student who passed through the doors of Sandy Hook.

But there are some people who believe that my mom isn’t dead — or perhaps that she never lived. So-called “Sandy Hook truthers” have terrorized my family, and all the families of Sandy Hook victims, since that December day. Truthers bully and taunt us online and threaten to kill us for our “lies.” They’ve accused me of being an actor — not a 31-year-old woman who will never fully recover from knowing that my loving, sweet mom’s last moments were so terrifying and sad. It’s like they see our pain and want to double down on it.

I’ve been personally attacked by InfoWars employees who work for conspiracy theorist and leader of the “truthers” Alex Jones. And on Father’s Day, Jones will get a sitdown interview with Megyn Kelly on her new show, “Sunday Night.” I struggle to fully convey my disgust.

It’s one thing to cover the news — it’s something else entirely to give airtime to someone who doesn’t even believe the news. There’s a difference between acknowledging that truthers exist and giving them a national platform. Kelly notes that President Trump has sung the praises of Alex Jones and even called in to his radio show — “our job is 2 shine a light,” she wrote on Twitter. Are we really so far gone that Kelly is using Trump’s behavior to excuse her own? Doesn’t she, of all people, know that our president is not above lies and bullying?

In a preview clip of the Jones interview, he says Sandy Hook is “complex” and admits to having debates during which he’s said that the mass shooting at my mom’s school never happened. What Kelly may not realize is that giving Jones airtime to voice these beliefs is a clarion call to America’s darkest elements, encouraging them to get louder. They’ve already started calling Sandy Hook families “crisis actors” again.

After my mom and 25 others were shot and killed at school, President Obama came to Newtown. He held us as we cried, listened to stories of our loved ones and resolved to do more to prevent senseless gun violence. I now live in a country run by a man who praised Jones’s “amazing” reputation and promised not to disappoint him — a man who once let a Sandy Hook truther lead the invocation at a campaign rally.

I never expected that members of the media would use Trump’s insensitivity to justify their own. An interview with Kelly legitimizes Jones to those who wouldn’t otherwise know his name. This is a man who has used my mother’s murder — and the murders of 25 others — to gain fame. He has taken the worst moments of my life and capitalized on them. There is no excuse for normalizing this man.

Shame on Kelly for meeting with him, and shame on NBC for giving him a platform, undoubtedly for ratings. You, too, have now profited off my pain.

Erica Lafferty is the daughter of Sandy Hook School principal Dawn Lafferty Hochsprung, who was shot and killed along with 25 others on Dec. 14, 2012. She is a member of the Everytown Survivor Network and Partnerships Manager for Everytown for Gun Safety. 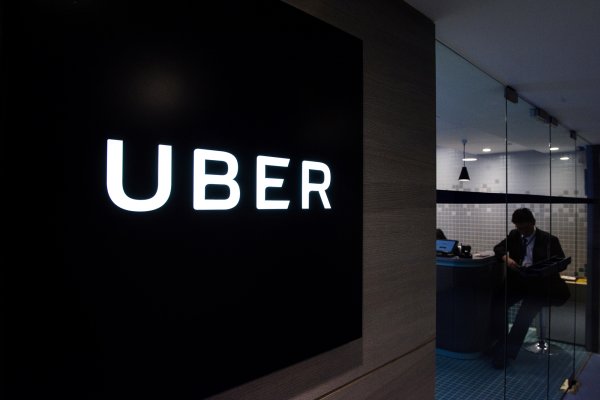 Sexism on Display at Uber's Meeting to Address Company's Sexist Culture
Next Up: Editor's Pick