Early in 2016, Lorene Weber, a real estate agent in the French town of Biarritz, began getting calls and emails from journalists about a deal she handled in 2012.

She remembered it well. The buyer and the seller had both been wealthy Russians, well-dressed and soft-spoken, not the flashy types who like to park their yachts in the nearby marinas of San Sebastian. Rather than sending their lawyers, the two men had come to handle the deal in person, which suggested to Weber that they had nothing to hide. So the reporters’ questions surprised her: Was she aware, and could she confirm, that this property was linked to Russian President Vladimir Putin?

For almost as long as Putin has been in power, the question of his personal wealth, and that of his friends and family, has been a frequent obsession for investigative journalists. Numerous leaks and whistleblowers have given credence over the years to reports that Putin has access to billions of dollars; the Kremlin has fastidiously denied them all.

But in the past few months, new revelations about the secret fortunes of Russian officials have begun to fuel mass protests around the country – most recently the ones that broke out on Monday, at which more than a thousand people were arrested in Moscow and St. Petersburg. As TIME reports this week, many of the protestors are teenagers born under Putin’s rule, who have known no other leader.

The organizer of those protests, Alexei Navalny, has made it his mission to track any evidence of Putin’s wealth – searching through piles of offshore bank records and flying drones to photograph the villas of the President’s associates. In recent months he’s dug up enough about them to keep millions of Russians glued to his YouTube channel, waiting for more. But when it comes to Putin’s personal fortune, even Navalny isn’t sure it can be found.

“Putin is the czar of corruption,” says the activist, who was arrested on Monday and sentenced to 30 days in jail for organizing the protests. “The czar of corruption owns everything and nothing,” he told TIME in an interview last month at his offices in Moscow.

At least as long as he remains in power, Putin doesn’t have much need to own anything directly. His office entitles him to the use of imperial palaces in St. Petersburg and ski chalets in Sochi. Thanks to his childhood friends – several of whom have become billionaires during his time in office – he can also holiday just about anywhere he likes. But what troubles Navalny and his young supporters is the way these privileges are passing to the next generation of Kremlin elites, renewing a system where success is reserved for the well-connected.

Nowhere is that more clear than in Biarritz, the quiet resort in southwestern France where TIME found evidence of the life afforded to Putin’s family. In some sense it was an obvious place to look. Nestled between the vineyards of Bordeaux and the Basque country in northern Spain, the beaches of Biarritz have attracted wealthy Russian visitors since the middle of the 19th century. Members of the Russian imperial court used to come for the climate and the pampering to be found at the Hôtel du Palais, a former palace built in the 1850s for the French Empress Eugénie.

The town has seen a revival of that tradition among the new Russian elite over the past two decades, partly thanks to its unusual place in the history of the Putin family. In the summer of 1999, when he was serving as chief of Russia’s main intelligence agency, Putin was interrupted by an urgent message from the Kremlin while vacationing in Biarritz with his wife and daughters. President Boris Yeltsin had chosen the young spy chief as his successor.

Putin returned to Moscow and, after some hesitation, accepted the offer. “I will work wherever you assign me,” he said, according to Yeltsin’s memoirs, Midnight Diaries. The following year, one of Putin’s first presidential decrees granted Yeltsin and his family immunity from prosecution, ensuring that no corruption probes could ever strip the Yeltsins of their wealth.

At around the same time, Russia took the unusual step of appointing an honorary consul in Biarritz, a town of less than 30,000 people; the nearby cities of Bordeaux and Toulouse have no such diplomatic outpost. “It was because Putin’s circle has an affection for this place,” says the consul, Alexandre de Miller de La Cerda, a descendant of Russian nobility who has held that position ever since.

In an interview with TIME at a Biarritz hotel, he explained that members of this circle would often attend the “debutante balls” that he hosted, most recently in 2013 in the ballroom of the local casino. The evenings were meant to showcase the scions of Russia’s new elites – giving Putin’s courtiers a chance to feel like the heirs to the czarist aristocracy, whose children went through the same rituals in centuries past.

Putin’s own daughters have mostly kept away from such pageantry, and the Kremlin has guarded their private lives almost as closely as its military secrets. Neither Maria Putina, 32, nor Katerina Putina, 30, has ever appeared on television. The state has not released any photos of them in adulthood, nor has it confirmed some of the most basic details about their lives, such as where they live, where they work and whether they are married. Considering the corruption scandals that plagued Yeltsin’s son-in-law, the marital status of the President’s children is no trivial matter in Russia.

Only last week, after more than 17 years in power, Putin finally admitted that his daughters have children of their own. In a clip released from The Putin Interviews, a four-hour documentary by the American director Oliver Stone, the President is asked whether he likes his grandchildren. Putin answers that he does, though he has little time to play with them.

That is about as candid as Putin has ever been about his family, which has left most Russians in the strange position of not knowing what his heirs even look like. Anyone curious about such matters would have to rely mostly on Western news reports on the identity of his younger daughter. A former classmate tells TIME that Katerina, who was born in East Germany during her father’s posting there as an agent of the KGB, studied at an elite German-language school in Moscow and had trouble fitting in, partly because of the bodyguards who followed her around to parties. She grew up to become a competitive dancer of acrobatic rock’n’roll, specializing in the category known as “boogie-woogie.”

According to investigations by Reuters and Bloomberg, Katerina is married to a young oil executive named Kirill Shamalov, whose net worth is estimated by Forbes magazine to be $1.25 billion. Their marriage helps illustrate just how tightly knit Putin’s circle has become. Shamalov’s father Nikolay is one of the President’s oldest friends. He is also one of the founders of Bank Rossiya, which the U.S. Treasury Department identified in 2014 as the “personal bank” for Putin and his close associates.

This habit of mixing friendship and finance was equally clear in the deal that Weber, the real estate agent, handled in 2012. According to property records obtained by TIME in Biarritz, the buyer of that property was the younger Shamalov, Putin’s reported son-in-law; the seller was the oil trader Gennady Timchenko, another one of Putin’s old friends. Weber confirmed that the documents are accurate. “I know why you’re here,” she told a TIME reporter who showed up at her office in May. “It’s about Putin’s family.”

As a courtesy to her former client, she says she called Shamalov last year and asked him how to respond to all the attention from journalists. (Shamalov did not reply the TIME’s requests for comment.) “He told me not to speak,” Weber recalls. “And I respect that.” But she suggested that it would not be hard to find people who know about Putin’s family in the area. “It is not unusual to have such clients here,” she says.

She was right. However hard the Kremlin and its media outlets may try to obscure the details of Putin’s family life, they are practically an open secret among officials in Biarritz. The town’s deputy mayor, Jocelyne Castaignede, says the property that Shamalov purchased in 2012 is one of at least two homes in the area connected to Putin’s family. “People see them in the market, going for walks,” she says of the President’s relatives. “But we don’t come up and take selfies with them. We don’t care who they are.”

In the neighboring town of Anglet, a second property tied to the family is currently under renovation. The owner of the Art Deco villa is listed in the local land registry as Artur Ocheretny, the St. Petersburg businessman whom Maria and Katerina’s mother, Lyudmila, reportedly married soon after divorcing the President in 2013. (Neither of them replied to TIME’s requests for comment.)

Vladimir Putin's ex-wife Lyudmila Putin is now married to the director of a Russian non-profit organization, who is renovating this house on the Basque coast of France
Olga Kravets—Meduza

La Cerda, the Russian consul, says Putin’s ex-wife has come almost every year to Biarritz to “take the waters,” both before and after her divorce. He says he often sees her during these visits, occasionally driving her own rental car or shopping for textiles at a favorite boutique. “She stops either at the Miramar” – one of the town’s most luxurious hotels – “or in the house that belongs to our mutual friend from Putin’s St. Petersburg circle,” he says.

Under both French and Russian law, none of these visits or property holdings would be illegal in any way, and Castaignede, the deputy mayor, assured TIME that Putin’s relatives would undergo rigorous financial checks, just like any foreign investors, to make sure the money they invest in France is clean.

But the persistent reports of the family’s foreign assets still pose a major dilemma for Putin. The image he has cultivated for nearly two decades is that of a selfless ascetic, a patriot who works “like a galley slave,” as Putin once described himself, and abstains from the comforts that most of his countrymen cannot afford.

In his official wealth declaration, the President admits to owning a small plot of land, two modest apartments, three Russian cars and an old-fashioned tent trailer known as a Skif, which was once popular among Soviet holidaymakers. Even his vacation destinations, as shown on Russian state TV, seem to underline the President’s modesty: the wild expanses of Siberia and the Russian Arctic, or the sleepy resort of Sochi on the Black Sea.

But Navalny has eroded the credibility of that facade. With the aid of his wildly popular YouTube channel, he has shown a young generation of Russians the opulence that comes with power in their country, and many of them have begun to protest what they see as a system rigged against them. They aren’t the only ones to find it unfair.

“Let God be the judge,” says Father Panteleimon, the priest at the Russian Orthodox Church in Biarritz, when asked about the Kremlin elites who visit his parish. “But to me, what they do here just doesn’t look good.” Sitting in the pews of his church on a recent afternoon, he says Putin’s family has owned property nearby for years – but they’ve never come by to give alms or to pray. “They just come here to enjoy themselves,” says the priest.

With reporting by Alec Luhn in Moscow 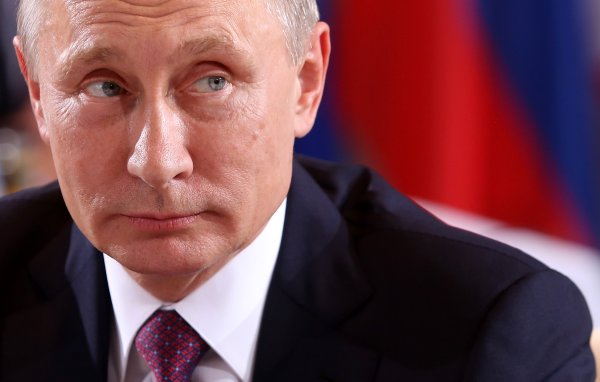 Mattis: 'No Indication' Russia Wants to Be Friends
Next Up: Editor's Pick