Here's Everything Sony Just Announced at the PlayStation E3 Show

After Microsoft’s Sunday afternoon salvo for its 4K-angled Xbox One X games console (and rejoinder to rival Sony’s boutique PlayStation 4 Pro), it was Sony’s turn to argue the case for its PlayStation platform suite. The messaging this year, after last year’s barrage of new hardware: games, games and more games.

Sony Interactive Entertainment boss Shawn Layden took the stage to fete the company’s software lineup. “We have an even more diverse range of blockbuster games coming soon,” he said. “PlayStation is home to all the biggest and best franchises in the world.” And then he vanished, making way for an hour of riveting game trailers intended to express the company’s confidence in what it views as its brand’s broad and idiosyncratic mix of gaming experiences.

Another glimpse of Uncharted: The Lost Legacy

The showcase soft-opened with a quartet of musicians (including a sitar player) in a contemplative, tuneful windup to a new teaser for Uncharted: The Lost Legacy, Naughty Dog’s standalone followup to Uncharted 4: A Thief’s End that’s due for PlayStation 4 on Aug. 22. Though nowhere as capacious as Nathan Drake’s final adventure, The Lost Legacy — which transpires in India and stars two female leads — looked lush and incredible.

An expansion for Horizon: Zero Dawn

It’s called The Frozen Wilds, and appears just as it sounds: a bosky, spacious snowscape through and through. The trailer promises lots more rumbling with mechanical dinos, as well as the return of Aloy, apparently sojourning here to explore a Devil’s Tower-ish mountain and “face the beast that guards it.” Look for it later this year.

The company’s mammoth open world zombie game appears to be coming along nicely, and the showcase trailer let viewers feast on seven minutes of anarchic undead mayhem. A zombie dog chases the protagonist fleeing on a motorcycle, eventually finding his way to a hostile camp of other human survivors he surveils before sabotaging by, among other things, calling in a horde of ravenous zombies. There’s still no release date for this one, though.

A Monster Hunter game for PlayStation 4

Capcom’s maiden monster-stalking roleplaying game for the PlayStation 4, dubbed Monster Hunter World, looked just as you’d expect a high-definition Monster Hunter to. A quintessential fantasy dude sporting an enormous sword strapped to his back strode through a jurassic forest, hiding from reptilian creatures and trailing something vaguely T-Rex-ian. Then he pounced, and an epic 30-second takedown ensued. This one’s coming in early 2018.

A Shadow of the Colossus remake

Marvel vs. Capcom Infinite has a release date

And a second story trailer for this mashup brawler starring Capcom and Marvel’s arsenal of game icons, superheroes and villains. You can play the full game on September 19, or download the “story demo” today.

Call of Duty: WWII and Destiny 2

We’ve played so many Call of Duty first-person shooters that it’s sometimes hard to tell them apart. This year’s return to World War II courtesy Sledgehammer makes that easier, trading the muzzled pops and sizzle of futuristic weaponry for the metallic clatter and thunk of wood stock, bolt-action rifles. It’s available Nov. 3.

Sony also gave us further look at Destiny 2 with a story trailer followed by a sizzle reel of exclusive features coming to the PlayStation 4. Bungie’s online shooter is also bumping up by a few days, arriving on Sept. 6. (It had been Sept. 8.)

PlayStation VR got its due with a handful of new experiences in the offing. You’d think with its gazillion versions (including one due shortly for the Nintendo Switch) that it’s time for Skyrim to retire, but its 2011 visuals make perfect sense for PSVR, with screen technology that benefits little from the sort of crisp graphics the newer 4K consoles specialize in.

Sony also showed off a new VR sci-fi game by Playful called Star Child, a psychological horror experience by Supermassive called The Inpatient, and a goofy Final Fantasy XV-inspired fishing game titled Monsters of the Deep. But of all these, Polyarc’s Moss — a game about a mouse exploring Hayao Miyazaki-like scenery — seemed the most promising. Look for the latter this holiday.

Mega-monsters lurk in God of War 4

Director Cory Balrog’s cranky-dad-schools-neophyte-son (while grappling with his own sordid past) looks both lovely and harrowing, somewhere between a bona fide Shakespearean tragedy and a Ray Harryhausen monster movie. It’s not technically an open world, but its crazy vistas sure make it look like one. It’s coming in early 2018.

It’s hard to discern where Detroit: Become Human‘s gameplay diverges from its cinematic sequences, but then that’s a David Cage game for you. The showcase trailer urges players to “Create [their] own story” in Cage’s tale of artificially intelligent humanoids rebelling against their human overlords. You can lead an android revolution, opting for violence or pacifism in a game where “your actions impact the world.” (No updates on a release timeframe for this one.)

Our first look at Spider-Man

Rocksteady’s Batman Arkham games deserve their plaudits as superhero-gaming’s finest, but there were moments when Treyarch’s Spider-Man games came close. Insomniac’s total series rethink looks more than ready to vie for the title after a stunning gameplay trailer that rounded out the showcase.

The trailer revealed a very different sort of Spider-Man whose maneuvers were lightning fast yet somehow easy to follow. It’s hard to say how much of that was the trailer’s editing or the game design itself, but if the game plays like the trailer, Insomniac may be playing with the continuity of motion, slowing it down then speeding it up in ways that map wonderfully to comprehensibility. Look for this one in 2018.

Yes, Microsoft’s Xbox One X is the most powerful console on the planet. And yes, Microsoft’s E3 software showcase was itself formidable. That Sony was content to spend less than an hour rolling through a montage of anticipated games we’ve mostly already seen speaks to its self-assurance about the immediate prospects of its platform. It has over 60 million PlayStation 4s in the wild not four years from launch, after all, a life-to-date record for the brand. The only downer in all of this, and to be fair Microsoft’s showcase was only marginally better in this regard, was the absence of smaller studio games. 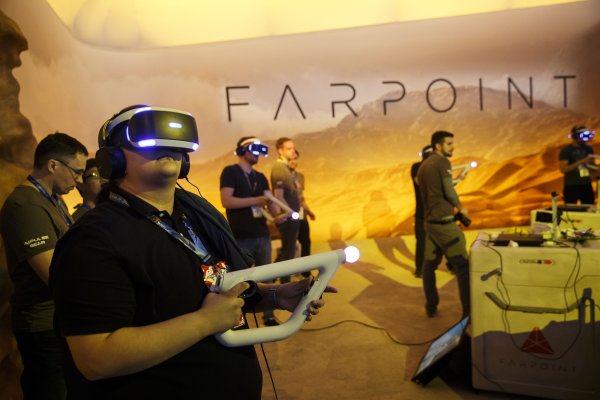