France's Emmanuel Macron Reaps the Benefits of Being the Anti-Trump

It was just a six-second video clip, but it signaled a coming-out of sorts. In Brussels in late May, France’s brand-new President Emmanuel Macron engaged in a white-knuckle hand-grip with President Donald Trump, in a gesture that the French leader admitted he had carefully planned, in order to signal to Trump he would not be messed with. “You have to show you will not give little concessions,” Macron explained to a French journalist afterwards.

The French, and indeed all of Europe, lapped it up, reveling in the sight of the fresh-faced leader—just 39, making his debut on the world stage—standing up to a U.S. President nearly twice his age and deeply disliked in Europe. And on Sunday, voters rewarded Macron’s year-old political movement, République En Marche (Republic Onwards), with a landslide victory in first-round parliamentary elections, almost ensuring that Macron will enjoy an overwhelming majority in the National Assembly after next Sunday’s run-off vote, according to the polling company IPSOS.

In the process, Macron has all but obliterated the traditional political parties that have dominated politics in France for about 50 years, including the Socialist Party that governed the country until last month, and that on Sunday won a miniscule 7.4% of the votes. The achievement has stunned political veterans, who liken it to a political revolution. “France is back,” declared the Macron-appointed Prime Minister Edouard Philippe on Sunday night. Several factors have powered Macron’s sweeping victories, among them a seething frustration shared by millions of French over economic stagnation and years of double-digit unemployment, and a belief that drastic change is necessary to solve the country’s problems. But as Macron absorbs his astonishing success, he owes thanks too to President Donald Trump.

After just a few weeks in the Elysée Palace, Macron is rapidly emerging as one of the clearest global counterpoints to Trump—catapulting him into a role that he never envisaged for himself, nor even pursued as a candidate. When he launched his improbable run for president in September last year, he focused his campaign squarely on domestic issues of taxes and jobs. Those issues are still crucial for Macron, who is seeking to overhaul the country’s hidebound labor laws and steep taxes. But as president he is seeking to position himself as the world’s anti-Trump, on issues from globalization and the environment to human rights. It’s a move that brings short-term benefits, but carries long-term risks.

The schism between the Parisian and the New Yorker exploded to the surface at last month’s NATO summit in Brussels and the G-7 summit in Sicily, where Trump scolded leaders for too-low defense spending, and hinted he would cancel the U.S. commitment to the global climate-change treaty, known as the Paris Agreement.

When Trump returned to the White House and announced he was doing just that, Macron pounced. Within hours, he released a video in which he told Trump in perfect English there “was no Plan B, because there is no planet B,” and appealed to U.S. climate researchers to move to France and take advantage of generous state-funded research projects. “Make our planet great again,” Macron said, turning Trump’s campaign slogan into a verbal slingshot against him. The following day, Macron launched the slogan as a new website, in an effort to persuade disaffected, high-skilled Americans to move to France.

The French President has also seized upon the opportunity afforded by Trump’s isolationism, in a round of high profile meetings with foreign leaders. Only weeks into his first term, Macron has already met with leaders of India, China and Russia. In a press conference with President Vladimir Putin at the Palace of Versailles on May 31, Macron accused Russia’s state-funded media of “lying propoganda” and demanded “the whole truth” about the murder of gays in Chechnya.

He also inaugurated a counter-terrorism center last week, aiming to turn France into a powerhouse for global intelligence. Trump, meanwhile, helped open a similar center in Saudi Arabia,effectively outsourcing the fight against extremism to Arab allies. Macron, by contrast, made it clear the fight must begin at home.

“Nature abhors emptiness,” says Dominique Moisi, senior counsellor at the Montaigne Institute in Paris, which has close ties to members of Macron’s team. “Suddenly, the torch of universalism and multilateralism is handed to Macron’s France,” Moisi says. “France is playing the card that used to be the American card.”

In France, that strategy is highly appealing politically. Just as it helped E.U. leaders to show close friendship with former President Barack Obama—who still enjoys huge popularity in Europe—so it is helping them to stand up to Trump. “It is very useful in terms of domestic politics,” says Jeremy Shapiro, director of research at the European Council on Foreign Relations in London. “Trump is less popular than Satan in Europe.”

Yet Macron could find the tactic backfires. Europe has longstanding ties with the U.S. that go deeper than the relationship between two diametrically opposed Presidents. France, for example, still depends heavily on U.S. cooperation in military conflicts in Mali and the Central African Republic.

“There is this hope in the E.U. that is widespread, that Trump is all bluster, and that it does not matter than Trump is President of the U.S., and that there are plenty of grown-ups in Washington who can contain him,” says Shapiro, who has previously worked in the U.S. State Department. That hope is misguided, Shapiro says, and that E.U. leaders like Macron are ill-prepared for how their open antagonism to Trump could cause problems at moments of crisis. “It really does matter who the President of the U.S. is,” he says.

After Trump announced he would pull the U.S. out of the Paris Agreement on climate change, some political analysts wondered whether he had done so partly because of having been disrespected in Europe by E.U. leaders. One report by the Washington Post said that handshake “irritated and bewildered” Trump, and may indeed have played a factor in his decision to quit the agreement.

What happens if another crisis strikes—a terrorist attack, for example, or even a war— and Macron and other E.U. leaders need U.S. help? This easily slighted President might not be so inclined to give it. “[Trump] is a volatile character with a lot of power,” says Shapiro. “They had better understand the implications of this, and plan for it, and right now, I do not think they are.”

Now that he is on the verge of a comfortable majority in parliament, France’s wunderkind might need to figure out a way to shake hands with his U.S. counterpart over their differences – and move on. 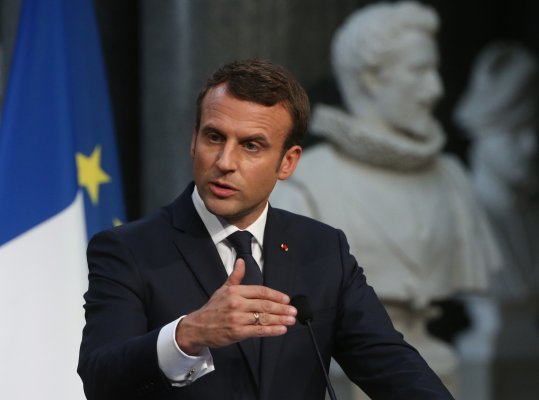