President Donald Trump directly contradicted Secretary of State Rex Tillerson on how to handle Qatar, speaking one after the other in the same afternoon.

In a joint press conference with Romanian President Klaus Iohannis, Trump touted a recent blockade of Qatar by neighboring countries as a success in his recent foreign trip. “The nation of Qatar, unfortunately, has historically been a funder of terrorism at a very high level,” Trump said Friday. “Nations came together and spoke to me about confronting Qatar over its behavior. So we had a decision to make. Do we take the easy road, or do we finally take a hard but necessary action? We have to stop the funding of terrorism.”

But earlier the same day, Tillerson said the opposite, urging an end to the blockade. “We call on the Kingdom of Saudi Arabia, the United Arab Emirates, Bahrain and Egypt to ease the blockade against Qatar,” Tillerson said, just before he attended Trump’s press conference. “There are humanitarian consequences to this blockade… The blockade is also impairing U.S. and other international business activities in the region and has created a hardship on the people of Qatar and the people whose livelihoods depend on commerce with Qatar. The blockade is hindering U.S. military actions in the region and the campaign against ISIS.”

Both statements come less than a week after Saudi Arabia, Bahrain, the United Arab Emirates and Egypt cut diplomatic and transport ties with Qatar. The conflicting messages coming out of the White House and State Department show the Trump Administration may lack a cohesive strategy for the United States’ complicated relationship with the Gulf nation. 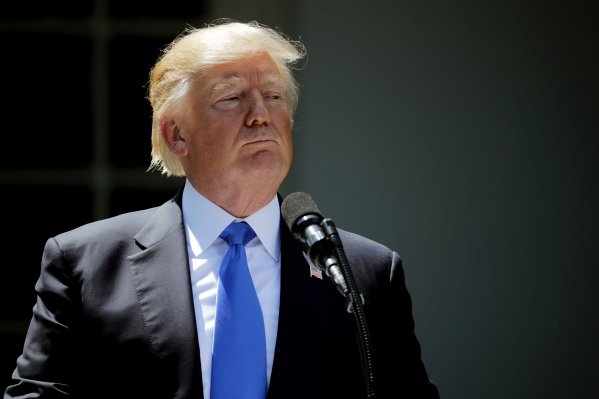 Trump Says He's Willing to Testify About James Comey
Next Up: Editor's Pick