The 6 Big Takeaways from the U.K. Election

British politics has confounded experts for years, from the unexpected novelty of a five-year Coalition Government to the drama of the vote to leave the European Union.

But the hung parliament that emerged from the June 8 snap election has produced seismic shocks across the U.K.

Here are 6 takeaways from the election:

1. One of the greatest political collapses the U.K. has ever seen

When Prime Minister Theresa May called the U.K. election in April, she held a 21-point lead in opinion polls. One gave her a 37-point lead over Jeremy Corbyn, the Labour Party leader whose left-wing policies led many in the political establishment to consider him unelectable.

What a difference a few weeks makes. After what has widely been considered a dismal campaign, May failed to secure an overall majority for the Conservatives. Having called the election in the hopes of building on a slim majority, her party actually lost a dozen seats.

Her job as Prime Minister is only safe because dumping her now would enable the Labour Party, which exceeded expectations, to argue the case for forming a coalition. But it’s clear she faces difficult times ahead. A member of the government tells TIME: “She’s safe for the foreseeable future, people want her to get Brexit started. Whether she can last until the next general election is questionable.”

2. …But May might have won outright if it weren’t for those pesky kids

The Labour Party usually polls well among 18-24 year-olds – the trouble is far fewer of them make it to the ballot box than Conservative-leaning elderly voters. But their enthusiasm for Jeremy Corbyn, who is 68, is remarkable: they turn up in their thousands to hear him espouse all manner of left-wing causes, from nuclear disarmament to pouring money into public services.

More importantly, two-thirds of this age group said they would vote for him ahead of the election.

But few thought Corbyn could translate that fervent support into votes, given this has always been such a struggle for Labour in the past. Rumour has it that 72% of 18-25 year olds voted, which would be higher than the overall turnout of just under 70%, while Labour did particularly well in university towns and cities, notably Sheffield where they toppled former deputy prime minister Nick Clegg.

Never has the divide between young and older British voters seemed so wide.

3. The most women in Parliament ever

More than 200 of the 650 lawmakers elected yesterday were women, breaking the previous record of 191 from two years ago.

To put that in context, only 456 women were elected between 1918 and 2015. There were 454 male lawmakers in the last Parliament alone.

4. And a slightly more diverse Parliament, too

In years to come, Tanmanjeet Singh Dhesi, who won Slough, will be the answer to the pub quiz question of who was the first turban-wearing Sikh lawmaker in parliament. Preet Kaur Gill joins him as the first female Sikh in the House of Commons, while the number of people of Indian origin sitting on the famous green benches is now a record 12, up from 10.

5. Scottish independence is off the table – for now

Scotland’s First Minister, Nicola Sturgeon, has been agitating for a second referendum on Scottish independence since the U.K. voted for Brexit last year.

Her Scottish National Party came closer than expected to gaining independence when 45% of Scots voted to leave the three century old union in 2014. Sturgeon’s hand was strengthened when her party devastated Labour in its traditional heartland by winning 56 out of 59 House of Commons seats in Scotland at the 2015 general election.

But the S.N.P.’s spectacular rise was followed by something of a tumble yesterday, winning only 35 seats and losing their impressive leader in Westminster, Angus Robertson, and former First Minister Alex Salmond. The Conservatives secured their best result north of the border in 34 years in evidence of a growing Scottish desire to remain part of the U.K.

Sturgeon conceded that the issue of independence had “undoubtedly” been a “factor” in the result, but said it was just one among many. “I will reflect on that and come to considered judgements and I’ll say more to that in the days to come.”

Sipping pints of ale and liberally puffing his way through packets of smokes, Nigel Farage had the everyday appeal that transformed right-wing United Kingdom Independence Party into a political force. Trump recognised a kindred spirit in Farage’s populist touch and he was the first British politician to meet the new president last year.

With Brexit secured, Farage stood down as Ukip leader so he could get his “life back” and hopefully make some money as a Fox News commentator and talk radio host.

However, he revealed overnight that he feels he has “no choice” but to return to the fore of British politics because the Conservative and UKIP collapses could mean the more E.U.-loving parties successfully secured a second referendum. 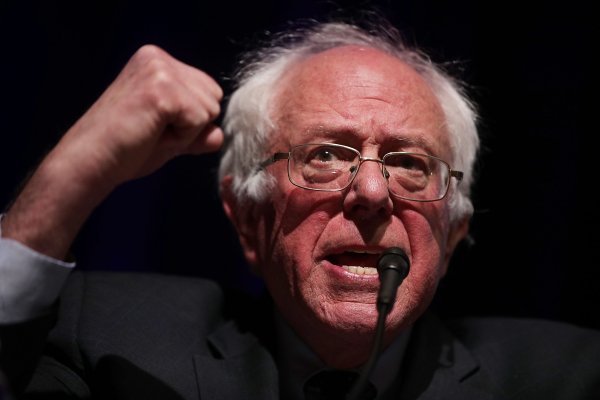 Bernie Sanders 'Delighted' to See the Labour Party Do So Well in U.K. Election
Next Up: Editor's Pick