A same-sex couple Joe Schofield (blue kilt) and Malcolm Brown from Tullibody, Clackmannanshire are married shortly after midnight in front of friends and family in one of the first same-sex and belief category weddings in Scotland on Dec. 31, 2014 in Glasgow, Scotland.
Mark Runnacles—Getty Images
By Abigail Abrams

The Scottish Episcopal Church has voted to allow same-sex couples to get married.

The historic move makes it the first major church in the United Kingdom to allow same-sex weddings, while also putting it at odds with the global Anglican Communion, according to the Guardian.

The vote by the General Synod in Edinburgh changed the church’s canon law to remove a doctrinal clause defining marriage as between a man and a woman. This will allow gay people from any Anglican church to ask to be married in a Scottish Episcopal Church, but does not force clergy to oblige, according to a statement on the Scottish Episcopal Church’s website. Those who are not comfortable with the change can opt out of performing same-sex weddings.

Advocates for gay rights cheered the decision, but leaders of the church acknowledged Thursday it may also cause some tension within the church’s ranks.

“I am very pleased for the couples who can now have their relationships recognized by the church and blessed by God,” the Episcopal Church’s Bishop of Edinburgh, The Right Reverend Dr. John Armes, told BBC News. “I’m also pleased for what this means about our church and the way we have been able to do this. But obviously any change like this creates pain and hurt in some as well, so as a bishop of the church I feel for them.”

A group of conservative Anglicans announced shortly after the vote they would appoint a new “missionary bishop” for Scotland to offer alternative leadership for those who oppose same-sex marriage, according to the Guardian.

The change also creates the possibility that the Scottish church could be sanctioned. Last year, the worldwide Anglican Communion decided to sanction the U.S. Episcopal Church after it allowed same-sex marriage. 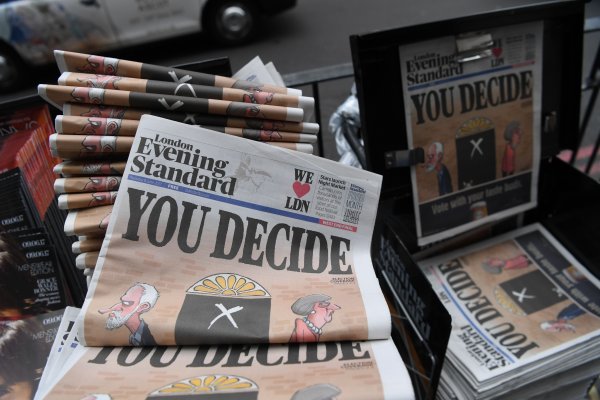 What the U.K.'s Newspaper Front Pages Are Saying About the General Election
Next Up: Editor's Pick