Here's What It Was Like Inside James Comey's Hearing

By the time James Comey arrived at the Senate Intelligence Committee hearing at 10 a.m. Thursday, Roxanne Brando had already been waiting in line for seven hours.

“It’s part of our American history,” the 24-year-old intern in Wisconsin Rep. Sean Duffy’s office said of why she got to the Hart office building at 3 a.m. to get a spot in the hearing room. “Today anything is possible, anything can change.”

Brando isn’t the only Hill intern who braved the early morning hours to snag one of the 88 public seats in the hearing room. Joe Noser, a 19-year-old who declined to say which office he works for, arrived with a gaggle of other interns around 5:15 in the morning. “It’s a remarkable opportunity,” Noser says. “I want to be able to tell my kids about something cool I did when I was in Washington.”

In front of the public seats where Brando and Noser sat was an even larger section for press. The Senate Periodical Press Gallery said there were 126 seats reserved for writing press alone and 35 more for radio and television journalists, which doesn’t count the more than 50 press photographers packed into the room or the networks in booths upstairs.

Luckily for the photographers craning to get a good shot, Comey stands a formidable 6 feet 8 inches, and there was a crescendo of clicks when he entered the room and then stood to take the oath.

Throughout the roughly 2.5 hours of testimony, the crowd remained subdued, despite the splashy news the former FBI director was making, including the revelation that he leaked his own memo on meeting with Trump, his belief that a special counsel will look into whether Trump committed obstruction of justice, the pressure he felt from President Obama’s attorney general on the Clinton email investigation and his hope that Trump taped their conversations.

One of the only times the audience buzzed and murmured was when Comey admitted he asked a friend to leak a memo on his behalf to speed up the appointment of a special counsel. That was followed by audible laughter in the room when he explained why he couldn’t just leak it to the press himself: “I worried it would be like feeding seagulls at the beach.”

The room also chuckled when Comey said he broke a date with his wife to have dinner with President Trump, and when he uttered his most quotable line from the testimony, “Lordy, I hope there are tapes.”

At that point, former U.S. attorney Preet Bharara, who had a reserved spot at the hearing, live-tweeted from his seat in the second row behind Comey:

Even though the room had been quiet and well-behaved, with committee chairman Sen. Richard Burr barely having to use his gavel to keep order, the senators and Capitol staff didn’t take any chances at the end of the hearing. Burr and ranking member Sen. Mark Warner gave a brief statement to reporters afterwards but refused to take any questions. Capitol police then herded everyone remaining into two separate rope lines against the walls outside the hearing room, leaving a wide pathway in the middle to clear a space for Comey when he exited out of concerns he would be mobbed by the press.

“At least it’s almost over,” one Capitol Police officer said to another as they kept the crowd at bay, refusing to allow anyone to leave the cordoned off areas.

When asked whether this was normal security protocol, one of the women in charge of keeping the hallway setup laughed: “Nothing about today is normal.” 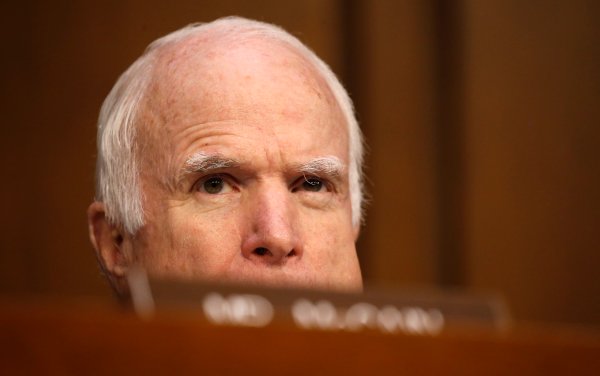 People Are Confused About John McCain's Questions to James Comey
Next Up: Editor's Pick