Invasion of the Garden Snatcher and Other Tales of Suburban Apocalypse

Ah, June. The absolute best month of the year. Such a happy month, so full of promise! School winds down, temperatures warm up, and my little suburban patch of the world bursts with green blooming wonder. Brightly colored goldfinches have returned to the feeder out back, and a wren has built a nest in the birdhouse beside the patio. I sit outside with my morning coffee, listen to the birds sing and feel simply at one with the world as a sense of tranquility and satisfaction — Hold on a minute. Has the bamboo started coming up over there?!

If it’s true that civilization carries the seeds of its own destruction, my garden may be ground zero. There is a running joke in my household that the title of my next book will be Everything Is Invasive; each plant I put in the ground seems intent on obliterating everything else around it. The bishop’s weed is trying to kill the vinca; the Solomon’s seal wants to strangle the geranium; the black-eyed Susan is determined to demolish the evening primrose; and the columbine keeps popping up where you least expect it, staging sneak attacks on everything.

And then there is the bamboo. The mother of all destruction: too tall, too dense, a reedy conqueror of plant life and human serenity. Planted in a moment of folly by the previous owner of my house, my bamboo is the opposite of eco-friendly, despite what experts will have you believe. In fact, the relentlessness, the sheer unkillableness of the bamboo in my yard calls to mind the murderous life form we met in 1979 in Alien. (And with the release of the sixth movie, Alien: Covenant, this summer, I feel pretty confident in declaring that the franchise is as unkillable as the beast.) If nothing is done about my bamboo, it will be only a matter of time before it destroys all of humanity. So, to my fellow citizens of the world: I apologize in advance. I’m no Sigourney Weaver.

This year, though, my despair about backyard bamboo has been replaced by despair about the Svalbard Global Seed Vault. Most of us haven’t paid much attention to the vault, which is a cool-looking structure that extends 425 ft. beneath a frozen mountain in Norway and contains nearly a million seed samples from around the world. The vault was designed to survive just about any kind of apocalyptic event. Except, apparently, global warming: mild panic spread throughout the scientific world recently when officials discovered that rising temperatures and melting permafrost had allowed water to penetrate the entrance to the vault, creating a small foyer glacier, as it were.

I have so many questions about the vault! First, can I get a tour? Second, who exactly is going to plant the seeds once the apocalypse hits and humanity is destroyed? And finally: Do the vault scientists know about my bamboo? Because, given the killer alienness of my backyard nemesis, and what appears to be a lax oversight of the vault, in my darkest, most apocalyptic imagination I envision my bamboo seeds eating all the other seeds that are meant to save us, assuming someone is around to plant them. Which I suspect would be very bad for biodiversity in our post-destroyed world.

I’m not entirely sure why suburbanites like me enjoy gardening. It is indeed beautiful: it’s soul-enriching to be outside, and manual labor, if recreational, can be quite restorative. Like Candide, we cultivate our own gardens in the hope of creating our own happiness. We also cultivate our own gardens to preserve the illusion that we have control over some part of the world. (And these days, with the Paris Agreement in our rearview mirror, we need all the illusion of control we can get.) But then some of us plant bamboo and, as Private Hudson says in Aliens, “Game over, man. Game over!”

I did recently learn a tip for bamboo control, which I intend to share with the folks in the vault should the situation there get out of hand. My friend Paul said that all you need to do is surround your bamboo with a trench that’s at least two feet deep and line it with thick, impenetrable plastic. When the bamboo roots hit the buried plastic, he explained, they “turn around and head back to the mother ship.” Yes, Paul said mother ship. He’s obviously been thinking about aliens too. 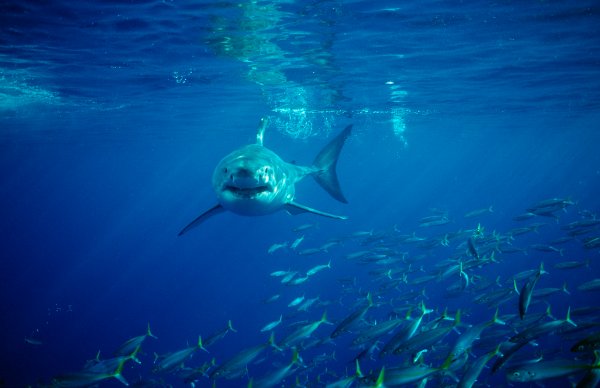 How Sharks Became So Scary
Next Up: Editor's Pick