How Millennials Are Reinventing the Priesthood

When 19 college guys go to Jamaica for spring break, they usually hit the bar and the beach.

Not Nicholas Morrison and his friends. Their trip to Montego Bay this March was far more medieval. Every morning they rose at 5:30 a.m. and prayed. Then they visited abandoned children with disabilities and dug an irrigation trench to protect the kids’ homes from flooding in the coming summer rains.

The young men joked as they moved 100 lb. boulders without machinery, naming one rock “Happy Birthday” and another “JP2,” a nickname for Pope John Paul II. Their chosen spring-break hashtag? #SemsOnMission.

Morrison and his friends are Catholic seminarians, studying to become priests. Philosophy majors at the Catholic University of America in Washington, D.C., they live and study at the nearby St. John Paul II Seminary, which opened six years ago to meet a growing demand from millennial men who want to join the priesthood.

Millennial priests are products of the Church, and the 21st century. They use Facebook and Snapchat, and text their friends funny GIFs. Some brew their own beer, protest at Black Lives Matter rallies, or go to the shooting range with Marine buddies. Some are comfortable with legalizing recreational pot.

They are more likely to wear their clerical attire than jeans in public, faster to share details of their prayer life than to keep them private and keener to give their Friday nights to the homeless than to Netflix. When it comes to politics, they are hard to pin down as liberal or conservative, and not all think preaching antiabortion homilies is a good idea.

Instead they speak openly with their supervisors about their struggles with chastity, and some even discuss their struggles with sexual orientation. Perhaps most importantly, there are more than there were before: 1,900 men under age 30 were enrolled in graduate-level Catholic seminaries in 2016, up from 1,300 in 2005, according to Georgetown University’s Center for Applied Research in the Apostolate. This June the next wave of graduates packs up to move to churches across the nation.

This shift comes at a time when Pope Francis, who became the Pontiff in 2013, is calling for a new kind of priest to serve in parishes across the world. His papacy is just four years old, and the millennial priests are not a homogeneous group, but already, they share a mission.

Forget the old stereotypes of the priesthood—reserved men, removed and dogmatic, who present themselves at the lectern to guide their congregations. The next generation heeding the Francis call looks a lot like Father Chris Seith, the parochial vicar at Our Lady of Mercy in Potomac, Md. Seith, now 28, does CrossFit, rides a bike through the halls of his parish’s Catholic school donning a goofy fake mustache and gondolier’s hat to greet all the students, and bakes cakes on Catholic feast days to encourage people to celebrate holy days as real parties.

Pope Francis’ mission of mercy and first major writing, The Joy of the Gospel, guides his purpose. “Joy is contagious, energy is contagious,” Seith says. “I just want to be the face of that joy.”

Read the rest of the story: “The God Squad: The Next Generation of Catholic Priests” in this week’s TIME magazine. 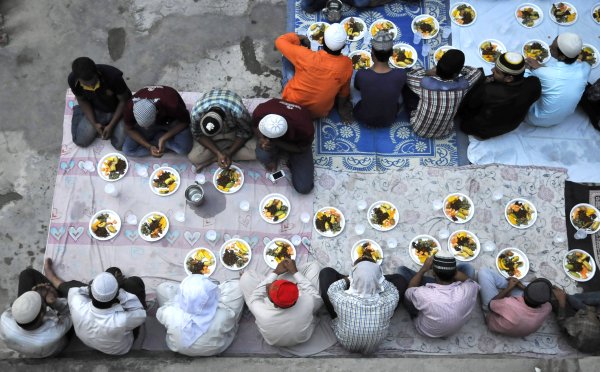 Young Muslims From Across the World on the Challenges and Joys of Ramadan
Next Up: Editor's Pick