Minecraft Is Getting An Update That Will Change Everything

Minecraft, meet bombshell: The promise of a master version of studio Mojang’s sandbox builder, identical across all platforms, not just functionally but at the codebase level, is finally happening.

Pop some corks and fill those glasses. But when this new version arrives, it also stands to usher in something much grander and subversive. It will shatter technical but also political cross-play barriers as adamantine as the nebulous bedrock layer at the bottom of every cube-riddled Minecraft world.

Despite efforts for years to bring Minecraft‘s many versions into alignment, the game has remained siloed in essential ways. You still have the Java-based PC edition, the franchise elder and a computers-only club (it also supports Mac and Linux) that is still the guiding template and place where new features tend to prove out first—to this version, all others are essentially beholden. Then you have the developmentally more versatile and future-proofed C++ edition, which presently works across Windows 10, iOS and Android devices. And finally there are the console editions, the most popular by aggregate sales and maintained by third-party 4J Studios. All of these versions lack precise feature parity and have no way of interacting with each other, forcing users onto separate, not-entirely-equal islands of play.

No more. With what Microsoft calls the “Better Together Update,” the Nintendo Switch and Xbox One versions of Minecraft will converge with the Windows 10, Virtual Reality and mobile versions. All will hence run the C++ version, or what creator Mojang and Microsoft have taken to calling the “bedrock engine.”

What about your saved data and purchases and world progression if you’re rocking those things on a Nintendo Switch or Xbox One? They’ll be grandfathered in, says Microsoft, transmogrified, somehow, from the old version to the new one when you update. The idea is to make the move as seamless as possible.

“All the different platform subtitles will go away and the game will simply be called ‘Minecraft,'” says the game’s marketing lead, Emily Orrson, during a Skype presentation. “And then we’ll rebrand the original version of Minecraft as ‘Minecraft Java Edition’ so that it’s distinguished as running on the Java [as opposed to C++] codebase.'” Microsoft says the Java edition has “more developers working on it now than ever before,” and that it’s committed to supporting it. The Xbox 360 and Wii U editions, while not part of the unification process, will continue to be supported as-is.

Another literally earth-shattering change: the console editions will now have unlimited worlds. “Really what we’re talking about today is Minecraft becoming endless,” says the game’s executive producer, Jesse Merriam. “As the console editions join bedrock, there are just a number of things they naturally inherit.” Console worlds today have a maximum size of 5,120 by 5,120 blocks, or about 3 miles by 3 miles. After the bedrock edition upgrade, players will be able to walk right off the end of an existing world, then keep going.

And Realms, the game’s subscription-based hangout for worlds players want to share with others (even when they’re not around) folds in organically with the bedrock edition. “All the worlds you’ve created, all the DLC you’ve bought come to the new version,” says Merriam.

The list of impactful changes goes on. By expanding the bedrock edition to consoles, Microsoft can carry across the new Marketplace feature it just launched, wherein creators can hawk wares like skin packs, retextured overlays and custom-built worlds. The company is also pulling server access inline, so that instead of having to know the IP address and port of your destination, you’ll find several ready and waiting in a new curated tab. Which ones? At launch Microsoft says it’ll support Lifeboat, InPvP, Mineplex and CubeCraft.

And the bedrock edition itself benefits from a console perk: Instead of up to 5 players being able to adventure together, you’ll now enjoy 8-player simultaneous. Playing in a Realms world bumps that number up to 11-player, and “slightly more” than that number can play together on the Server experiences, says Merriam

What about JSON editing, the text file feature Microsoft introduced last year that lets PC players tweak the game through simple plain language commands? Is that coming to consoles, too? Not exactly, says Microsoft. But there’s a way to make it happen: “You can apply those JSON edits or add-ons to your worlds, to your realms, and you can connect to those worlds from any platform,” says Merriam. So yes, console players can play on JSON-edited worlds, they just have to do the editing on a platform that supports it.

Unification is important for another less obvious reason. Minecraft has arguably been a creative platform from the start. But it’s also been a sundered one, divided by codebase strictures and natural platform firewalls. Bridging the console divide feels transgressive in trans-gaming ways. Minecraft isn’t a bona fide operating system, but it has elements of one. It feels increasingly comparable to something more like a creative suite of tools, only one that’s operating at base levels. Think of it less as a game you can now play with friends behind the industry’s iron curtain, and more like a suite of gamified paintbox tools, each cube a kind of foundational pixel delimiting an alt-reality as pliable and capacious as anyone’s imagination.

Yes, there is an elephant in the room, and it’s squashing my word processor: Whither Sony’s PlayStation systems in all this? When asked, Microsoft’s response was to refer us to Sony, though noting that bringing Sony into the fold is something it hopes will happen. “Our goal is always to bring every Minecraft player together,” said Merriam. “Today we can confirm Nintendo Switch and Xbox One support, but our vision is really to get everyone together.” Is the holdup technical? Political? Some mix of the two? Microsoft wouldn’t say, but when asked, replied that bringing PlayStation 4 over was something it “really wanted to do.” 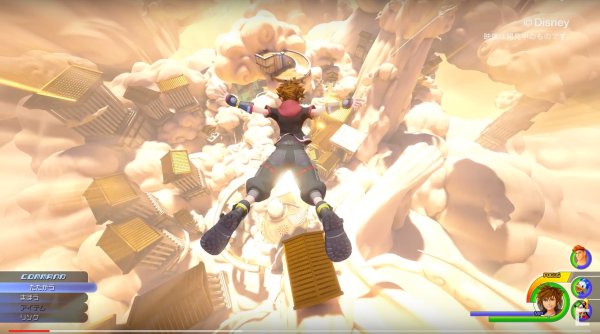