When President Trump announced his nominee for a new FBI director with a tweet on Wednesday, Holly O’Reilly couldn’t see it.

That’s because O’Reilly, 47, who goes by @AynRandPaulRyan on Twitter, was blocked by the President on May 28 after she criticized him. She’s now working with lawyers from the Knight First Amendment Institute at Columbia University to get Trump to unblock her.

“It’s like FDR took my radio away,” she told TIME, adding she feels it’s like “if my Senator kicked me out of a town hall.”

The tweets are no small matter. Trump’s announcement of an FBI director came several hours before the official White House statement, and Press Secretary Sean Spicer has confirmed that the tweets should be considered official presidential statements. White House Director of Social Media Dan Scavino also shared a video arguing that Trump is “communicating directly with YOU” to bypass news media.

O’Reilly’s attorneys—Jameel Jaffer, Katie Fallow, and Alex Abdo—argue that Trump’s Twitter account is a “designated public form” and blocking users “suppresses speech in a number of ways.” They sent a letter to the White House Tuesday asking Trump to unblock her and several other online critics. If the users aren’t unblocked, a lawsuit could follow.

The White House staff did not respond to a request for comment on this story.

Blocked users aren’t completely unable to see the President’s tweets. They could use a third-party app, log out, or create a new account on Twitter, three options that, although unwieldy, give some lawyers reason to think the President may be able to block individual accounts.

The last time O’Reilly was able to reply to the President on Twitter was after he tweeted that Prime Minster Theresa May was “very angry that the info the U.K. gave to U.S. about Manchester was leaked.” The mother of five had a pointed response.

“YOU ARE THE LEAKER, you bloody idiot. God, you’re embarrassing.” It was the first in a string of tweets that included a viral photo of Pope Francis Trump spread by his critics. “I think that the Pope tweet was probably was the clincher,” she said.

It wasn’t out of the ordinary for O’Reilly whose tweets were quick to rise on the platform along with other critics. Raised a Republican, she is now a moderate Democrat and served as an organizer of the June 3 March for Truth rally. She started mocking Trump in tweets containing insults and links to articles right after the election. She kept it up until she received tweets alerting her she was blocked, a decision she believes hurts him.

“He needs to hear people holding up a virtual disagree sign,” she said.

With nearly 32 million followers, it’s unlikely that Trump sees even a fraction of the responses from people like O’Reilly, but she said that was beside the point.

“Whether or not it’s true, it made me feel better,” she said arguing her blocked status is an “unconstitutional suppression of dissent.”

O’Reilly said she’s also unsure that she’ll be unblocked, which she thinks hurts her ability to persuade her fellow citizens.

“If I don’t get to see what he’s saying, I don’t know what’s happening and it puts a wall a between us, but it’s more about engaging with people who disagree with me,” she said. 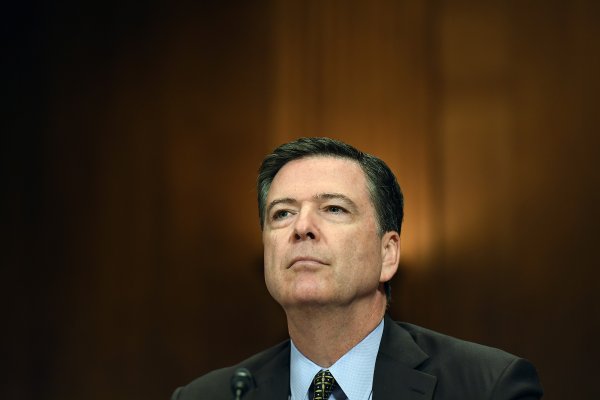 Why James Comey’s Testimony Won’t Give All the Answers We Need
Next Up: Editor's Pick