In Under the Skin, a new sci-fi film opening in theaters on April 4, Scarlett Johannson plays an alien in disguise who preys on unsuspecting men in Glasgow. For the role, director Jonathan Glazer had the actress go undercover, donning a brunette wig and a British accent; hidden cameras were used so Johannson could pick up ordinary blokes who didn’t realize they were speaking to one of Hollywood’s most famous actresses — or even that they were being filmed. The men were only clued in about the movie set into which they had stumbled after the actress had successfully lured them into her white van. (Some of the men then went on to continue shooting scenes, knowingly, for the film.)

The unconventional shoot gives the movie an unpolished, sinister vibe as the men gamely make small talk and eagerly climb into the vehicle of a beautiful stranger. The sinister vibe becomes reality for some of them, who are led back to the mysterious woman’s home only to be fatally submerged into a pool of black liquid. It’s dark and twisted, which is precisely why Under the Skin has left so many critics enthralled. The New Yorker‘s Anthony Lane raved that “the rough edge of naturalism, on the streets, slices into the more controlled and stylized look of science fiction, and the result seems both to drift and to gather to a point of almost painful intensity.” Meanwhile, the Guardian‘s Peter Bradshaw calls the film “visually stunning and deeply disturbing: very freaky, very scary and very erotic.”

But what do the men who appeared in the fim think of their bizarre filming experience?

Kevin McAlinden, an electrician in Glasgow, was just one of the men that ScarJo cruised during the film’s shoot. The 29-year-old father of two tells TIME that he was walking down the street early one evening in 2012, when, not far from his house, a white van pulled up to the side of the road. “I just walked over to the van and I asked the lady, ‘Are you okay? Do you need directions or a hand or anything?’ and she just said, ‘Oh, I’m just looking for the motorway — can you direct me to the motorway?'”

Did he have any inclination he was speaking to the Scarlett Johannson? “I thought I recognized the face a wee bit but it didn’t really click,” he says.

After a few minutes of small talk, the woman offered McAlinden a ride. “She said, ‘Oh, it’s freezing cold, you must be cold. I’ll give you a [ride] up the road up to your house.’ I said, ‘It’s fine, it’s only a five, ten-minute walk,’ and she kept going, ‘Are you sure, are you sure?’ I thought, I’m not going to turn around and say no.” So he jumped in the van, without a second thought.

“As we started driving, I could hear this kind of rattle coming from the back of the van and I thought that sounds a wee bit weird. I looked over a couple of times, but I couldn’t see anything [off],” he says, noting that the view into the back of the van was blocked by a plate of black glass. “Her story was that her family owned a furniture warehouse in London and she was just up on business to collect the furniture, so I thought that’s where the noise is coming from, it was just the things rolling about in the back.”

But the woman also peppered him with questions, asking, “Do you live alone?” and “Are you married?” McAlinden was surprised with how forward she was: “It’s not the right conversation generally, but with strangers what can I say?” Unsurprisingly, McAlinden wasn’t too bothered with the interest from a seductive woman. (For the record, he was single at the time.)

Yet, the biggest surprise took place when she reached McAlinden’s house. After saying good-bye, “I just jumped out of the van and was walking along to the house [when] I turned around and this guy’s there with a bit of paper, [saying] ‘Oh can I get you to sign this?’ That’s when he says, ‘Oh, that was [Scarlett Johannson] and it’s a film, it’s going out be out in a couple of years.” He knew instantly that the man was telling the truth.

McAlinden says he didn’t have any qualms about signing the release and granting the crew permission to use the footage of him for the film. “I thought I might as well try, it’s a wee bit of fun.” He was slightly disappointed he didn’t get asked to film any more scenes — he doesn’t meet the terrible fate of some of the film’s other men — but McAlinden doesn’t have any plans to pursue a Hollywood career.

“That was the end of it. I hadn’t really heard anything [about the movie] until lately when I’ve seen the adverts and I thought, Oh my, that must be that one that’s coming out then.” The trailers also reminded him that it was time to tell his new girlfriend about the time Scarlett Johannson picked him up on the street. (He says she took it well.)

And what does he think of his one and only big-screen appearance? “I’ve not seen it yet,” he admits, sheepishly. “I’ll just take my time to go and see myself.” 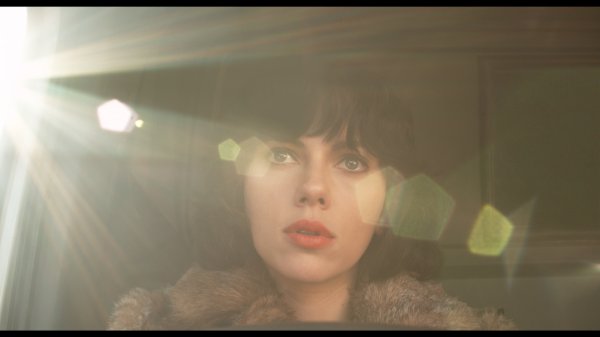 Scarlett Johansson Is an Alien Seductress in Under the Skin
Next Up: Editor's Pick