Former President Barack Obama warned against the appeal of populism and authoritarianism during a speech in Canada on Tuesday.

Speaking at the Montreal Chamber of Commerce, Obama addressed major issues of the day such as climate change, fake news and maintaining trust in global institutions at a moment of great uncertainty, CNN reports. Obama warned that other such moments in history have allowed for a rise in populist and sometimes authoritarian leadership.

“In periods like this, people looking for control and certainty, it’s inevitable,” Obama said of the rise of populist leaders. “But it is important to remember that the world has gone through similar moments … Our history also shows there is a better way.”

“The call for isolation or nationalism” and the “rolling back the rights of others” should be avoided, he said, calling on people to “replace fear with hope.”

The 44th President also addressed climate change and the Paris climate agreement that President Donald Trump pulled the U.S. out of last week, calling it “the most ambitious agreement in history to fight climate change.” Obama called the accord “an agreement that even with the temporary absence of American leadership will still give our children a fighting chance.”

After his speech, Obama sat down to dinner with Canadian Prime Minister Justin Trudeau. 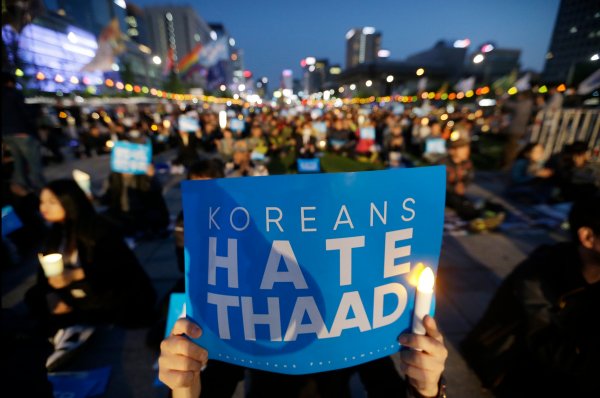 South Korea Calls For Halt to THAAD Missile Deployment
Next Up: Editor's Pick