Lantana was just a child when she was forced to drop out of school and start working so her family could afford her brother’s school fees. In the impoverished areas of northern Nigeria where she lives, most bus stops are thronged with young girls hawking peanuts or other snacks from buckets balanced carefully on their heads, and so she joined them. The girls are easy prey for the older men who prowl these chaotic market places. Lantana thought she had found a protector in a bus tout who regularly bought up her daily wares, until the night he lured her into a dark alley.

Many adolescent girls in Nigeria can relate to at least one element of Lantana’s story; giving up school to work for their family, abused by a trusted figure, not knowing where to go for safety. Unlike those girls, however, Lantana isn’t real. Yet thousands of young women are calling a free number to hear more about her fictional life, and talking to mentors on the other end of the line about what they would do if they were her.

Lantana’s story is one of four tales of young heroines being used in a radical new program to help adolescent girls in Nigeria navigate the challenges of growing up in a country where low levels of female empowerment, education and employment have contributed to early marriage, a stagnating economy and, some would argue, a concomitant rise in Islamist insurgent groups like Boko Haram.

The program, called Girls Connect, uses compelling stories like that of Lantana to reach young women from across a broad spectrum of Nigerian society through the kind of interactive voice recognition software that a bank might otherwise use to address consumer queries. But unlike a bank hotline, which is designed to eliminate the need for costly human interaction, the point of Girls Connect is to get the callers to engage with a call center representative who can help them process the information and use it in their daily lives. It’s kind of like calling a toll-free bank line to get the latest foreign exchange rates, only to be connected with an agent who gives out personalized advice on balancing the household budget.

When callers dial in, they are offered a menu of four stories, with four chapters each, to choose from. Once they listen to the 2-3 minute dialogue—performed by professional radio actors—they are connected to specially-trained agents, which the company calls Role Models. The 13 agents — all women — work off a standardized script that is designed to help callers internalize the lessons that Lantana and her fellow characters learn the hard way.

By asking questions such as “Is this something that someone you know has experienced before?” or “If you thought a girl was put in danger by someone, what advice would you give her?”, the Role Models can help girls work through problems they are currently facing, or might face in the future, in subjects ranging from safety to relationships, jobs or social media.

“It’s really challenging being a girl in Nigeria today,” says Iveren Shinshima, who works as a Role Model. “We talk about how she can stay safe while making money. How she can budget. How she can avoid cyber bullying. Whether it comes to making money, using social media or your relationship with your environment, the message we are trying to instill is that you are valuable as a girl.”

The buzzing call center where these phone calls come in by the hundreds each day is far removed from the bus stops where girls like Lantana are forced to work. A five-story building crammed with uniform gray cubicles and staffed by fashionable Nigerian millennials in identical headsets, the iSON BPO International Call Center of Ibadan, in southeastern Nigeria, is the cornerstone of a booming new business in back-office outsourcing run by Indian entrepreneur Ramesh Awtaney. The center manages customer care lines for several Nigerian banks and telecom companies — and now adolescent girls. The idea arose from a chance meeting between Awtaney and Farah Ramzan Golant, the London-based CEO of Girl Effect, an international nonprofit organization dedicated to ending poverty through empowering young women. Nearly half of iSON’s 10,000 employees in Africa are women, and Awtaney wondered if there was a way to use his call center services to benefit Africa’s young women.

“In the customer service industry we try and resolve your problem by putting you in touch with an automated machine. If the machine can’t help, you are connected to an agent,” Awtaney tells TIME. “So the thinking was that we could replicate this process for girls in the context of giving them information on relationships, medical problems, education, and social media, etcetera.” It was an unlikely marriage between the tech and the non-profit fields, with the tantalizing prospect of wide reach—the holy grail of cost effective girl-empowerment programs. “What was interesting about it was how, like an interactive customer service program, Girls Connect can be scaled up very rapidly,” Golant says. “If you combine this content with toll free numbers, the impact can be huge.”

Natalie Au, the global gender director for Girl Effect, says that unlike radio or TV shows designed to empower young women, Girls Connect can replicate the one-on-one experience of working with trained mentors, but on the much more accessible platform of mobile phones. “When you have a chance to be asked questions about, ‘well how did that story relate to your own life?’ there’s a chance that before it goes out the other ear, you’re going to have to stop and say, ‘actually what would I have done in Lantana’s situation?’ So you’re much more likely to retain those key messages or skills rather than them being passively consumed and then forgotten.”

To the Role Models, who field on average 230 calls a day, the value is not just in the lessons they impart, but in simply being present for adolescent girls at an all-too-familiar vulnerable point in their lives. “Growing up I faced a whole lot of challenges that I know these girls will be facing as well,” says Maureen Ijogo Onah, another Role Model. A lot of times teenage girls just “want someone to listen to them, to talk to them, just to hear them out in whatever situation they find themselves in.” For Hadiza Ibrahim, being a Role Model is a refreshing change from her usual call center work. “The conversations are relaxed, quite friendly. You’re talking to a girl who trusts you. It’s quite different from listening to an angry customer who probably can’t get his Internet on.”

Although Girls Connect content is currently only available in Hausa, the language of northern Nigeria, the response has been enormous, with some 42,000 calls over the first, month-long period of testing, despite limited advertising. Girls are calling in multiple time just to listen to the stories, and requesting specific Role Models by name.

Amina, 14, has listened to each story several times, she says, adding that she feels for the first time in her life like someone understands what she is going through. A street hawker herself, Amina says that Lantana’s story doesn’t go far enough — in the program she is only robbed, not sexually assaulted, as is the experience of many of Amina’s fellow hawkers. Still, she says, the story and the Role Models have helped. “There are many girls that are hawking who have listened to this program, and they come to understand that even if something like this happens to them, they can go and tell their parents, as Lantana did, so that they can take action.”

Each time Amina listens to a story, she says, she comes away with a new perspective on how to deal with a problem in her life—like the time someone started sending her lewd photos via one of Nigeria’s popular text messaging apps. “Even when I told him to stop, it was like I was instigating him to do more. But if I told my parents, they would blame me for being on social media in the first place. And when I told my friends they said it is normal, there is nothing wrong with it.” That day she chose to listen to a Girls Connect story about a girl who used social media to start a business. When Amina spoke with the agent afterward, she told her about her issues. The Role Model told Amina how to block the man from her account, and helped her develop a strategy for avoiding cyber stalkers. If a girl in need of specialized help makes contact, for instance depression, suicidal tendencies, pregnancy or abuse, they are typically referred to aid organizations in their areas that can help them directly. The Role Models also encourage the girls to reach out to their parents or to the police when necessary.

Aisha Haliru, who runs a weekly empowerment program for adolescent girls in Kano, says the impact of the telephone mentorships has been transformative. Haliru’s classes provide the kind of safe spaces for girls that Girls Connect seeks to replicate on the telephone, but she can only reach a few dozen girls at a time. Girls Connect has the potential to reach thousands. And the need is even greater than ever, says Haliru, citing rising incidents of rape in Kano, and even the kidnapping of young women by the Boko Haram terrorist group.

Haliru now lends out mobile phones so her students can call Girls Connect on breaks between vocational training courses and lessons on personal hygiene. “These days, a girl can’t always confide in her mother,” says Haliru, “but with the Role Models, she will let it all out. She knows that the Role Model won’t know her, or her sister or her mother. So when she has never been able to share with someone something that bothers her, and then suddenly she can speak freely with someone who understands what she is going through, it’s an amazing thing. I see the girls changing before my eyes.”

ISON and Girl Effect plan to expand the Role Model trainings and content so they can launch the project nationwide, and eventually in other countries as well. The Role Models are looking forward to continuing their work mentoring a new generation of Nigerian girls, but for some their joy is tinged with a touch of regret. “I truly, truly wish I had something like this while I was growing up,” says Role Model Ibrahim. “If I had had this kind of an opportunity to connect to a role model, I probably would have called her every day. And I probably would have made a lot less mistakes.” 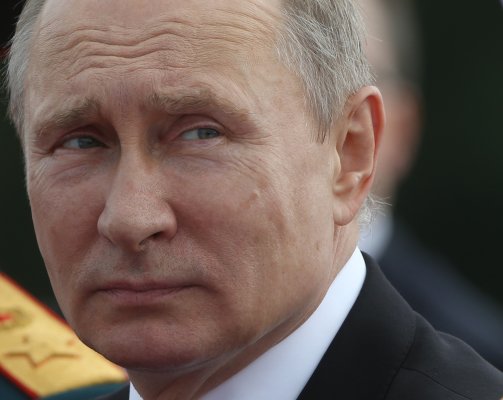 How U.S. Sanctions Are Working (Or Not) in 5 Countries
Next Up: Editor's Pick