What to Know About the Three London Bridge Attackers

The three men who drove a van into pedestrians on London Bridge and then stabbed people with 12-inch knives in nearby Borough Market on Saturday evening have been identified by the police.

Khuram Butt, Rachid Redouane and Youssef Zaghba killed at least seven people and critically injured more than 50 before they were fatally shot at the scene by officers eight minutes after their violent rampage began. Here’s what we know about them so far:

Khuram Shazad Butt, known as Abu Zaitun or “Abs,” was on the radar of counter-terrorism investigators before carrying out the attack but was deemed as a “low priority,” the Associated Press and the British Times report.

The Pakistan-born Brit, 27, is thought to have been married with two children, a baby and a three-year-old. He was living in Plaistow, in east London, at the time of the attack. Neighbors of Butt’s told MailOnline that Butt was run over outside his house in east London aged around eight, breaking his teeth and leaving his leg badly damaged.

Butt’s neighbors also said that he had previously worked for a branch of the fast food chain KFC, as well as London transport operator Transport for London (TfL). TfL confirmed to The Guardian that he had worked as a trainee customer services assistant for six months last year. It is thought that Butt was working at Westminster tube station, meaning he had access to tunnels underneath Parliament.

Butt was an avid weightlifter, but staff at the all-Muslim Ummah Fitness Centre gym, where he trained, said in a letter that they saw nothing of concern during his time there, adding that they would “help the police in any way [they] can.”

In January 2016, Butt appeared in a Channel 4 documentary called The Jihadis Next Door, in which he was seen posing with the ISIS black flag in Regent’s Park in central London. He was detained by police for an hour over the stunt, which happened in 2015, but was released without being arrested. Butt was also seen nodding as he listened to a sermon, with the speaker saying: “This is not the real life, my dear brothers. This is a passing time for us.”

Butt was associated with the banned extremist group al-Muhajiroun, whose leader, Anjem Choudary, was jailed in 2016 in relation to recruiting more than 100 British terrorism suspects. The group has been connected with the fertilizer bomb plot thwarted in the U.K. in 2014, as well as the killing of British soldier Lee Rigby in a London street in May 2013.

Around a year and a half ago, Butt’s neighbor, Erica Gasparri, contacted the police because she was concerned that he was trying to radicalize local children. “It was wrong what he was doing,” she told the AP. “He kept talking about the Islamic State. I got very angry.” Another neighbor told the AP that Butt had once been kicked out of a local mosque for interrupting an imam.

On Tuesday morning, The Telegraph reported that Butt’s relatives’ home in the Pakistani city of Jhelum, 60 miles south east of Islamabad, had been searched by plain clothes officers. Officials at the scene told the paper that it was suspected that Butt had been radicalized in the U.K., rather than Pakistan, but they were searching relatives’ houses as a precautionary measure.

Police identified the second attacker as Rachid Redouane, 30, who also used the surname Elkhdar, according to the AP. Authorities say Redouane claimed to be both Moroccan and Libyan. He worked as a pastry chef in Ireland, where he lived for much of the past five years, though he also spent some of that time in the east London suburb of Dagenham, AP reports. He was never under surveillance by Irish authorities.

Redouane married a British woman, Charisse O’Leary, with whom he had a daughter. The couple are believed to be separated, AP reports, and O’Leary was among the 13 people detained soon after the attack. She was one of 12 who have been released without charge; one man remains in custody.

According to the Italian publication Corriere della Sera, Zaghba was stopped in 2016 when trying to catch a flight to Turkey, before travelling to Syria. The Italian intelligence agency had reported his presence and his trips to both the Moroccan and British authorities, the publication reports. The newspaper states that Zaghba was working in a seasonal job in a London restaurant and had visited Italy as recently as 2016.

AP reports that Zaghba had told authorities who stopped him last year at Bologna’s airport in Italy that he “wanted to be a terrorist” before correcting himself. Bologna prosecutor Giuseppe Amato said “We did everything we could have done, but there weren’t elements of proof that he was a terrorist. He was someone who was suspicious because of his way of behaving.”

Zaghba’s mother also told Italian news magazine L’Espresso that her son had expressed a desire to go to Syria “because it was a place where you could live according to a pure Islam.” 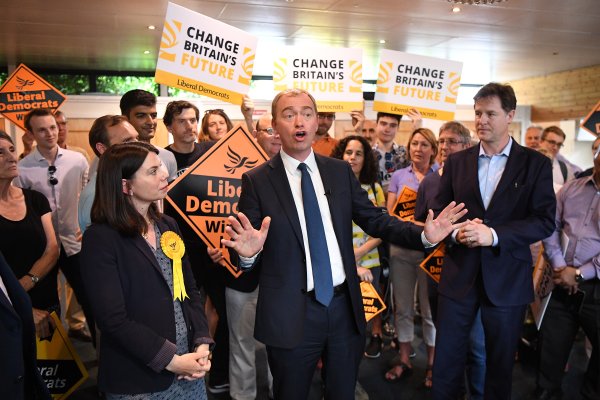 The Liberal Democrats Bet on a Brexit Election. It Hasn't Paid Off
Next Up: Editor's Pick