8 People Who Resigned Over Disagreements With President Trump

Sean Spicer is not the first member of the Trump Administration to leave after disagreeing with the president.

Here’s a look at eight people who resigned from the Trump Administration over disagreements.

The White House press secretary resigned Friday after a tumultuous six-month run. Spicer’s daily televised press briefings made him a household name and the subject of a high-profile Saturday Night Live parody by Melissa McCarthy.

The State Department’s undersecretary for management was one of the first departures in what become an exodus of State Department staff who resigned ahead of Trump’s inauguration. In late January, the “entire senior level of management officials resigned,” reported the Washington Post. Assistant Secretary of State for Administration Joyce Anne Barr, Assistant Secretary of State for Consular Affairs Michele Bond and Ambassador Gentry O. Smith, director of the Office of Foreign Missions, also left with Kennedy.

The only hijab-wearing Muslim in the West Wing lasted just eight days under President Trump. Rumana Ahmed joined the National Security Council under Barack Obama but decided to stay on under Trump despite deep misgivings about the incoming Administration. In an op-ed published by The Atlantic, Ahmed said she noticed the different atmosphere from day one, when “the new staff looked at me with a cold surprise” and “the diverse White House I had worked in became a monochromatic and male bastion.”

After seven more “appalling” days, Ahmed decided drew a line over Trump’s attempt to introduce a travel ban targeting citizens of several Muslim-majority countries. “When Trump issued a ban on travelers from seven Muslim-majority countries and all Syrian refugees,” Ahmed wrote, “I knew I could no longer stay and work for an administration that saw me and people like me not as fellow citizens, but as a threat.”

Experienced CIA analyst Edward Price had his disagreements with presidents George W. Bush and Barack Obama — but said that he didn’t think that party politics would ever compel him to leave his job. “We’re taught to tune out politics,” Price wrote in the Washington Post, “but this administration has flipped that dynamic on its head: The politicians are the ones tuning out the intelligence professionals.”

Price said he was mystified by the way Trump had “cast doubt” during his campaign on the intelligence community’s conclusion that Russia was behind the hacking and release of emails related to the election. Trump’s actions since taking office, Price wrote, “have been even more disturbing.” Price said he believes that the CIA will weather the storm, but in the meantime intelligence professionals will have to work from behind “a political moat” isolating the White House from unwelcome voices.

Runcie was head of the Education Department’s student financial aid office until May, when he stepped down over a dispute with Trump’s Education Secretary Betsy DeVos. Runcie was ordered by DeVos to testify before the House Oversight Committee on rising improper payment rates for federal student aid programs — for which he said he had “not heard a single compelling reason” for. Runcie wrote in a memo that he felt “encumbered from exercising my authorities to properly lead” and was “incredibly concerned” about management issues. He concluded that the department’s “alignment on governance and mission between operational leaders and political ones […] no longer exists.”

Musk courted considerable controversy when he agreed to join Trump’s Strategic and Policy Forum as an advisor and then participated in the President’s Manufacturing Jobs Initiative. As a strident advocate for the environment and renewable energy, the CEO of the world’s leading electric vehicle manufacturer was accused of hypocrisy. Musk argued that despite their disagreements, engaging with Trump was more positive than shutting him out, and that he could affect change from the inside. The President’s decision to withdraw the U.S. from the Paris Agreement on climate change, however, was a step too far for Musk, who said on Twitter shortly after Trump’s announcement that he was quitting the advisory council.

Trump’s decision to pull out of the Paris Agreement was a red line for another member of the council, as well: Disney CEO Bob Iger. Shortly after Musk’s announcement, Iger said on Twitter that he, too, would quit the panel.

In a more detailed statement later issued by Disney, Iger wrote: “Protecting our planet and driving economic growth are critical to our future, and they aren’t mutually exclusive. I deeply disagree with the decision to withdraw from the Paris Agreement and, as a matter of principle, I’ve resigned from the President’s advisory council.” A longtime Democrat and supporter of Trump’s campaign rival Hillary Clinton, Iger also faced criticism for taking a role on the council. Like Musk, Iger had previously argued that “there is an opportunity” to being “in the room where it happens, to express opinions.”

The post of U.S. ambassador to China, like many in the diplomatic corps, has been left vacant since Trump’s inauguration. The job of acting ambassador fell to the chargé d’affaires of the U.S. Embassy in Beijing, David H. Rank, who stepped down from his position ahead of a transition to Trump’s pick for ambassador, Iowa Governor Terry Branstad. Although Rank didn’t publicly state a reason for his early departure, China expert John Pomfret cited anonymous sources who said that Rank told embassy staff he could not deliver a diplomatic note informing the Chinese government of the U.S. decision to pull out of the Paris agreement. According to Reuters, Pomfret’s account was confirmed by a U.S. official who preferred not to be named. A spokesperson for the State Department’s East Asia Bureau, Anna Richey-Allen, told Reuters that Rank had made “a personal decision” to retire after nearly three decades with the foreign service. 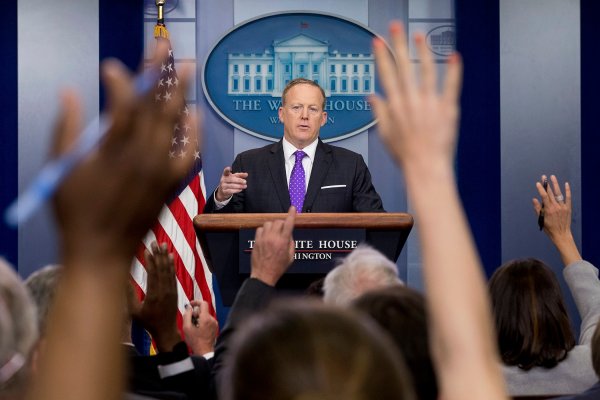 Spicer Leaves the White House
Next Up: Editor's Pick