President Trump's Plans Are Stalled in Congress. Here's How He Wants to Fix That

The White House is looking to reboot its stalled legislative agenda with action on health care in the coming weeks, paving the way for tax reform after Labor Day—that is, if President Trump doesn’t step in the way.

The Trump Administration already faces an uphill battle to sell its infrastructure plan this week, when headlines will likely be dominated by the testimony of former FBI Director James Comey about his firing.

“There’s no doubt that keeping members focused on investigation detracts from our legislative agenda, detracts from what we’re trying to do for the American people,” White House Legislative Affairs Director Marc Short told reporters Monday.

That challenge has been compounded by the London terror attacks, Trump’s tweeted response and the courts’ handling of the Administration’s travel ban. Each has dragged the White House further from its goals.

Still, the White House is betting that lawmakers in the Senate have made sufficient progress in ditching the Affordable Care Act that officials are pegging their hopes on a vote in the coming six weeks. A group of Republican senators are largely rewriting the earlier House-passed bill to make it more palatable to the party’s moderates in the Senate and to conform with the chamber’s arcane procedural rules. The White House’s optimism on the subject is buoyed by the sense of crisis surrounding rising premiums—in part as a result of the Administration’s threats to subsidies under the law—over the still dicey political realities.

Senate Majority Leader Mitch McConnell is urging the 13 Republicans—all men—who are focused on developing a version of health care legislation to submit their ideas privately by the end of the week. These lawmakers from across the spectrum are tasked with considering the House-passes version and then developing ideas than can find support or 50 Senators, with Vice President Mike Pence breaking a tie.

McConnell advisers plan to send proposals to the nonpartisan Congressional Budget Office to figure out just what they are considering. Anything they pass must meet certain requirements to qualify for the expedited process the House used, and many of the options on the table from the House could destroy the political viability in the Senate. For instance, some of the cuts could peel off Republicans who represent older or poorer states. At the same time, Republicans worry there could be a revolt among voters if what they pass is seen as too draconian. Others worry that they don’t fully know the costs until the CBO issues a price tag—and that price tag might burn the whole thing to ash.

With an eye on the midterm elections, McConnell’s team doesn’t want to ling on the health care bill much beyond the July 4 holiday. A protracted fight often favors inaction, his advisers rightly note, and there is no appetite among the Republican lawmakers to damage themselves to deliver Trump a win on health care if it costs them reelection odds. Similarly, they see little upside in moving on legislation that the House will not choke down because it lacks purity.

If the Republicans in the Senate can’t find compromise by the July 4 recess, some are advising McConnell to move to other goals, notably tax reform.

At the same time, lawmakers will need to move forward with extending the government’s borrowing authority before departing on August recess, Short said. He declined to state whether the Administration would insist on legislation that solely raises the debt limit, or if the vital move could be combined with spending cuts as conservatives have long demanded. “We look forward to working with Congress to figure out the right vehicle,” Short said.

Only then would Republicans move forward with tax reform. The White House, which hoped to have a draft legislative text of the package by June, now expects it to be ready after Labor Day. Key debates—including whether the package could be allowed to increase the deficit—remain to be ironed out with lawmakers.

“What are we are trying to avoid is to have a House bill, a Senate bill, and a White House bill,” Short said, adding the Administration is hoping the package will be revenue neutral, but suggesting the White House could accept a package that isn’t.

By Sept. 30, lawmakers will also be faced once again with keeping the government open. Short walked back Trump’s comments in a May tweet suggesting the need for a “good shutdown” at the end of the fiscal year, saying that the president is frustrated with the pace of change in Washington and that the administration believes a shutdown would not be a good thing.

Short, pressed on the president’s tweets and public statements that contradicted his legislative team, defended the president’s communications, who he noted ran as “not a conformist candidate.

“He may not have a conventional style in doing that,” Short said, “but many of his efforts are extremely helpful to us in getting our legislation accomplished.” 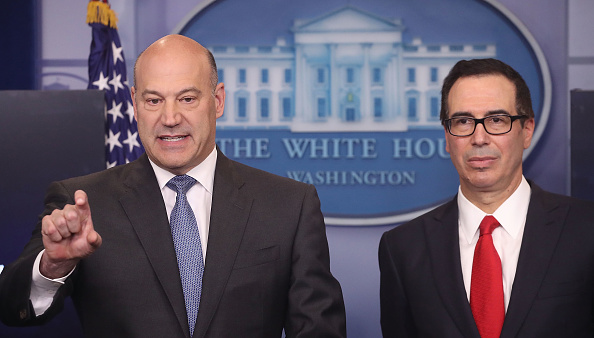