Arms is a fighting game for the Nintendo Switch about not exactly punching. Also not exactly jumping and juking or weaving and bobbing. It’s not even exactly about the eponymous appendages the game bids you fling at its menagerie of goofball pugilists, whose corkscrew arms uncoil in slow-mo arcs like lethal cruise missiles. Things are often more than they seem—like the title, meaning “arms” as in limbs, but also armaments, the game boasting a funhouse arsenal’s worth.

To reverse David Lynch, Arms is about keeping your eye on the hole, not the doughnut. Everything interesting about the game, as in jazz, poetry, comic books, stand-up comedy and so much else, happens off the beat. It has the thoughtful pulse of tennis, a sport as much about thinking between volleys as nailing them. And it has the thoughtless staccato cadence of boxing, a sport about landing pulverizing body blows. It is weird the way Nintendo games often are, but also wonderful the way gambits like this too often aren’t.

Whether it’s for you is another matter. Wii Sports for grownups it is not. Wii Sports (a motion controlled Wii game that included boxing) was already for grownups anyway, a casual novelty you didn’t play so much as “play.” Arms is something else, a deceptively cartoonish fisticuffs brawler aficionados don’t have to pretend to take seriously, whether artfully stabbing controller buttons to jump and dodge, or clutching the Switch Joy-Cons and swinging for the fences. It looks goofball when spectating, sure, but feels as honed, tactical and responsive as genre exemplars like Street Fighter and Tekken.

In an inspired move, you can mix and match “arm” types, opting for gonzo gadgets like ice cannons, electrical boomerangs, bombs or guardian-faced shields that creep across arenas like ineluctable battering rams. Each player picks two per round (of three you lock in before the match), assigned to your left or right arm as desired. Elemental effects kick in once you’ve built up a charge, letting you apply penalties that can fatigue, freeze or knock down opponents. Each arm has its own speed and weight class, and the possibilities mushroom when multiplied by all the ways you can spin a punch, twisting your wrists (when motion controlling) or nudging the thumb sticks to send arms veering off-center at variable distances.

The arenas add their own wrinkles that can make or break outcomes, from obstacles and springboards to random power-ups and explosives you can pummel toward your opponents. One area includes destructible columns that repel punches until they’re destroyed, for instance, while another gathers hovering platforms you clamber onto then pilot around. A third raises random rows of cubes that obstruct your view, while a fourth forces you to slug it out between automobiles. It’s all tactically unsettling and annoying in just the right ways.

Over this stuff Nintendo layers a quirky “Versus” mode that gathers delightful mini-games like “V-Ball” (volleyball by another name, only the ball explodes if time runs out or it touches the ground on your side), “Hoops” (forget balls, you simply grab and dunk your opponent), “Skillshot” (aim for pop-up targets as well as your opponent who’s attempting to do the same from the other side) and “1-on-100” (you versus an onslaught of challengers). You can play them as one-offs, but they pop up elsewhere, too, randomly swapped in for arena fights and breaking up the campaign’s otherwise conventional ladder climb.

Zoom out, and Arms has everything you’d expect of an arcade fighter. Characters slot along a spectrum from slower but more impactful and resilient to nimbler but less damaging and more vulnerable. You can battle computer-controlled foes solo or with a friend in “Grand Prix” mode, earning cash to unlock alternative gloves and hybridize your fighter. Or you can dive straight into multiplayer, from online casual or ranked duels to local Wi-Fi smackdowns that can be safeguarded with codes. Crank up the campaign difficulty and the game’s artificial intelligence brings the pain, but squaring off with friends in impromptu split-screen matches is where Arms finds its strongest footing for the same reasons no one really plays those other fighters for their solo modes.

I’m not yet convinced, as the game’s designers seem to be, that Arms‘ “Thumbs-up” motion controls (you hold the Joy-Cons sideways instead of face-on) are the most precise way to play. That may say more about me or my patience mastering free motion precision than Arms, and it’s worth keeping an eye on the eSports crowd’s reaction. But my preference at this point is for button controls. The upside of mastering those is that you’re just a hop-skip away from playing in “Joy-Con sideways” mode, whereby two players hold a single Joy-Con and trade blows on the Switch’s screen. My only quarrel is that the recessed shoulder triggers are as tricky as ever to work reliably under pressure.

Yes, it’s tennis-boxing inside a carnival wrapped in a learning curve that against practiced players feels steep, and yes, that sounds like something few would play. Which is why Nintendo calls it Arms, a game that is more than it seems, novel in a genre prone to repetition, and precisely the sort of pick-up video game the Switch was designed for. 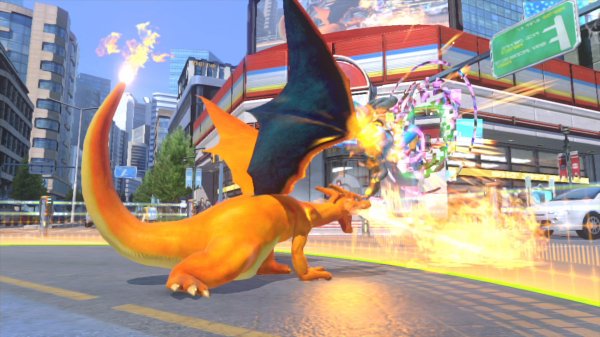 'Pokkén Tournament DX' Is Exactly What the Switch Needs Now
Next Up: Editor's Pick