'Hell on Earth': A New Documentary on Syria Traces the Rise of ISIS

“Daddy, is the plane bombing?”

It was well after midnight last fall in the Aleppo countryside, and the kids couldn’t sleep amid the deep booms outside. It was a familiar scene for Radwan, a man who fled the city with his brother, Marwan, and their families at the start of the war.

“Honestly, I’m about to explode. I can’t express what’s happening inside of me,” says a wide-eyed Radwan, facing the camera. “I have to smile against my will so the kids don’t get scared.”

That’s one gripping scene among many in Hell on Earth: The Fall of Syria and the Rise of ISIS, a National Geographic documentary premiering June 11. The film by Sebastian Junger and Nick Quested, the Emmy Award-winning pair behind Restrepo (2010) and Which Way Is the Front Line from Here? (2013), traces how the bloody crackdown on youth dissent in March 2011 metastasized into the intractable conflict that today has left an estimated 500,000 dead and millions uprooted.

Using testimony from activists who were instrumental in the war’s early stages, as well as analysis from political leaders and a range of experts, the film examines what role outside influences played in the creation of the Islamic State, the resulting refugee crisis and the rise in right-wing movements in the West.

Archival footage from news networks (like Obama’s “red line” comment) and activist media networks is used, as is ISIS propaganda footage, but a significant portion of the film makes use of commissioned footage shot by a network of local activists and journalists. The family was provided money to purchase a smartphone so they could capture what is rarely seen: the insufficient meals, the insomnia during the attacks, the argument between parents about whether to flee even further, risking death to find life again.

In this exclusive clip, Junger, the film’s narrator, succinctly distills how the conflict grew into an all-out civil war with far-reaching tentacles.

“One of the problems with letting a civil war go on too long is that more and more people get involved. It’s a little bit like a bar fight where all of a sudden everyone’s jumped in, throwing chairs at each other,” Junger says in the clip.

“Syria became a civil war in response to the violence of the government; eventually Iran got involved through Hezbollah to support the Assad regime. The Kurds got involved. Turkey got involved. The Arab Gulf states got involved. Eventually all the world powers and all the regional powers had some investment in the war in Syria and in many cases were actively involved in the fighting. Once you get into a proxy fight, so many people have such huge interests in the outcome that it’s almost impossible to stop.” 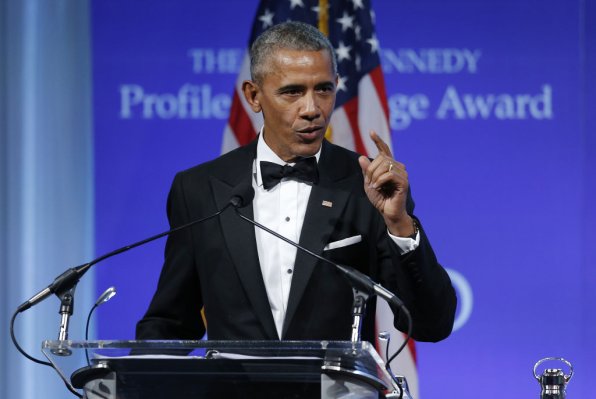 Barack Obama Says His Most 'Courageous' Decision Was Not Bombing Syria
Next Up: Editor's Pick