By Jennifer Calfas and Kate Samuelson

Ariana Grande returned to Manchester with a star-studded benefit concert for the victims of the May 22 attack — just hours after another terrorist attack struck the United Kingdom, killing at least seven people and injuring dozens in London.

But the most recent terrorist attack in England didn’t stop concertgoers and performers from spreading messages of love, positivity and resilience.

Grande, who recently visited her injured fans in the hospital, performed in front of tens of thousands of fans, sometimes through tears, as they cheered her on, chanting “Manchester” and holding signs reading “for our angels.”

“Tonight is all about love, am I right?” Grande told the crowd.

“I want to thank you so much for coming together and being strong,” Grande said. “I love you guys so much, and I think the kind of love and unity you’re displaying is the medicine the world needs right now.”

Grande sang several songs with other performers — including an emotional rendition of her song “My Everything” with the Parrs Wood High School choir from Manchester.

She told the audience she changed the set list at the last minute after she met the mother of Olivia Campbell, one of the fans who died in the attack. Her mother told Grande that Olivia would’ve wanted her to play her hits — and Grande launched into one of her latest singles, “Side to Side.”

“Evil will test us. It will show its face again. But we will be ready. We will be great. We will be fearless and we will honor our children. Hatred will never win. Fear will never divide us bc on this day we stood with Manchester,” said Scooter Braun, Ariana Grande’s manager.

Here are some of the best quotes from musicians during their performances so far:

“It’s not always easy to choose love, right? Especially in moments like this it can be difficult,” she said. “But love conquers fear and love conquers hate. And this love that you choose will give you strength, and it’s our greatest power.”

Perry encouraged concertgoers to reach out and touch their neighbors and tell them they love them.

“What an amazing thing we’re doing tonight, would you not agree?” Bieber asked as the crowd cheered. “Would you agree that love always wins?”

“Love always wins in the end,” he added.

Bieber also took a moment to honor those that were killed or injured at Grande’s concert last month.

“Despite all the things that have been going on … I don’t feel or smell or hear any fear in this building. All we feel tonight is love. Resilience. Positivity.”

“The most important responsibility we have on this entire planet is to take care of one another,” Cyrus said.

“We love you. We’re with you. The whole world is watching and I want to dedicate this next song to you,” Horan said.

“I’m with all of you at Manchester, and we all know that love is truly the key,” he said in a video message. “I don’t care what ethnicity you are, what religion you are. Love really is the way. So anyone who tries to make anyone think that things of destruction has anything to do with God, with Allah, they’re a lie. Yes, I stand with you Manchester.

The lead singer from Mumford & Sons opened the concert with a moment of silence. He broke it by telling the crowd, “Let’s not be afraid.”

“There is no end to grief,” the English star said. “That’s how we know there’s no end to love,” William said. “We’re holding onto these people. We’ll see you again when the stars fall across the sky.”

“We are here, we are together and we are one,” Will.i.am said during a rendition of “Where is the Love?” with Grande.

“I just want to send my love and support from me and the boys to all of you there, to Ariana Grande for organizing this,” McCartney said in a video message. “Tonight, Manchester is in the hearts of people all around the world, and we send our love to all of you.”

The retired professional soccer player told attendees in a video message the people in Manchester “are some of the most special I’ve ever met in my life.”

“Tonight is about remembering those who suffered so much on that night, but also celebrating the great spirit we have in this city,” he said. “It’s a place we all love.” 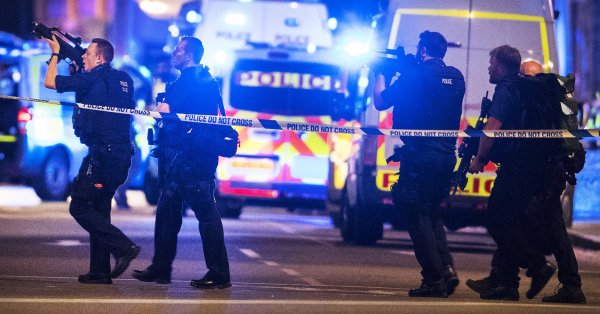 Scenes From the London Terror Attack
Next Up: Editor's Pick