Leaders from across the globe have shown an outpouring of support and condolences for the United Kingdom after a terrorist attack struck the nation’s capital Saturday night, killing at least seven people and wounding some 48 others.

The U.K. was still dealing with the aftermath of a May 22 suicide bombing at a pop concert that killed 22 people in Manchester, mostly young girls, when this weekend’s attack occurred.

Britain’s main political parties suspended campaigning ahead of a general election due to take place on Thursday, June 8. But Prime Minister Theresa May said the election would go ahead as planned.

In a strong statement, May called for a more robust response to extremism and terrorism – including a call for the global community to forge “international agreements that regulate cyberspace,” where radicalism can spread without oversight.

As details emerged, world leaders responded with messages of grief and support. Below are a few words of solace from leaders worldwide:

German Chancellor Angela Merkel said news of the attacks struck her with “sadness and dismay.” The Associated Press reports that Merkel issued a statement early Sunday, saying “we are united beyond all borders in horror and sorrow, but also in determination.” The Chancellor reiterated her country’s commitment to working with other nations in the fight against “every form of terrorism,” adding that Germany stands “firmly and with determination at Britain’s side.”

In a telegram to Prime Minister Theresa May, Russian President Vladimir Putin said the London Bridge attack was “shocking in its cruelty and cynicism.”

A statement released by the Kremlin said Putin “expressed his confidence that the response to the incident should be the escalating of joint efforts in the fight against the forces of terror around the world.”

Fellow European leaders showed support, as well, as did others from Scotland, Australia and elsewhere.

U.S. President Donald Trump first responded to the attack by saying that his administration’s controversial proposal to ban travel from six predominantly Muslim countries should be implemented. “We need to be smart, vigilant and tough. We need the courts to give us back our rights. We need the Travel Ban as an extra level of safety!” Trump tweeted.

He later followed up with a more mainstream message of assistance.

Trump spoke by phone with British Prime Minister Theresa May shortly after the incident, “offering his condolences for the brutal terror attacks” and praising the “heroic response of police and other first responders,” according to a White House readout. 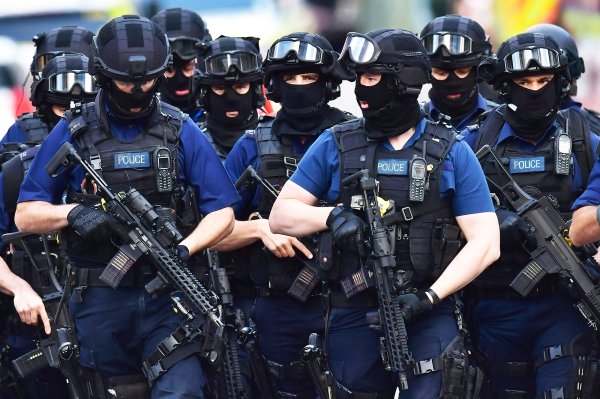 What to Know About the London Attack
Next Up: Editor's Pick