President Donald Trump’s campaign has reportedly announced a “Pittsburgh, not Paris” rally across from the White House on Saturday to commemorate the United States’ withdrawal from the global climate agreement.

The rally is sponsored by the Fairfax County Republican Committee and the Republican Party of Virginia and will kick off at 10 a.m. in Lafayette Square, according to a Trump campaign announcement, Politico reports.

“As you know, the President has been under siege from the mainstream media and the Democrats, especially now that he put American jobs first by withdrawing from the Paris Accord. Therefore, we are organizing a group to demonstrate our support for President Trump and his fearless leadership,” the invitation reads, according to Politico.

On Thursday, Trump announced his intentions to remove the U.S. from the landmark climate accord that has been signed by every country on the planet save for Syria and Nicaragua.

The rally’s name stems from the President’s speech in which he said: “I was elected by voters of Pittsburgh, not Paris. I promised I would exit or renegotiate any deal which fails to serve U.S. interests.”

But Pittsburgh Mayor Bill Peduto doesn’t see eye to eye with Trump’s remarks, pointing out that the city voted for Hillary Clinton in 2016. “As the Mayor of Pittsburgh, I can assure you that we will follow the guidelines of the Paris Agreement for our people, our economy & future,” he tweeted Thursday. 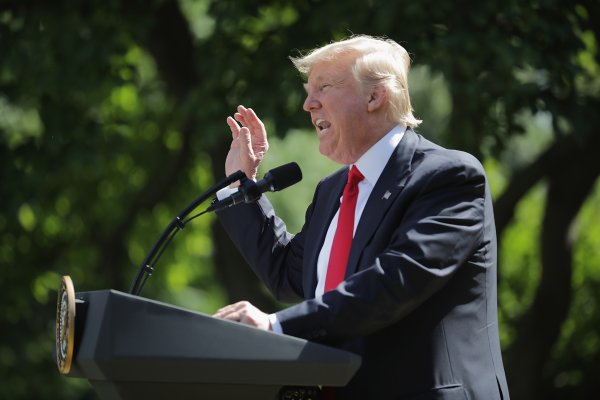 'Stay Tuned': Why President Trump Keeps Us in Suspense
Next Up: Editor's Pick