French President Emmanuel Macron was disappointed with President Donald Trump’s announcement on Thursday that the United States would withdraw from the Paris climate agreement— but he had some fun too.

Like many other world leaders, Macron reiterated his commitment to the international climate agreement and to finding new ways to protect the planet from global warming.

“To all scientists, engineers, engineers, entrepreneurs, responsible citizens who were disappointed by the decision of the United States, I want to say that they will find in France a second homeland,” Macron said in his response to Trump. “I call on them: Come and work here with us — to work together on concrete solutions for our climate, our environment. I can assure you, France will not give up the fight.”

While America’s exit from the 2015 accord is not expected to doom the deal, it will weaken the agreement and could hurt U.S. businesses, the very thing Trump says his decision will help. The decision also isolates the U.S. on an important issue as the international community aims to continue efforts to curb climate change. Only two other countries — Syria and Nicaragua — did not sign the agreement in 2015. Nicaragua didn’t sign on because the nation felt the agreement would not go far enough to fight climate change.

Macron, for his part, was not deterred by America’s withdrawal. He called on all people to continue working to help the planet, and broadcast his remarks in English, helping promote his joke on Trump’s slogan.

“I call on you to remain confident. We will succeed,” the French leader said. “Because we are fully committed, because wherever we live, whoever we are, we all share the same responsibility: Make our planet great again.” 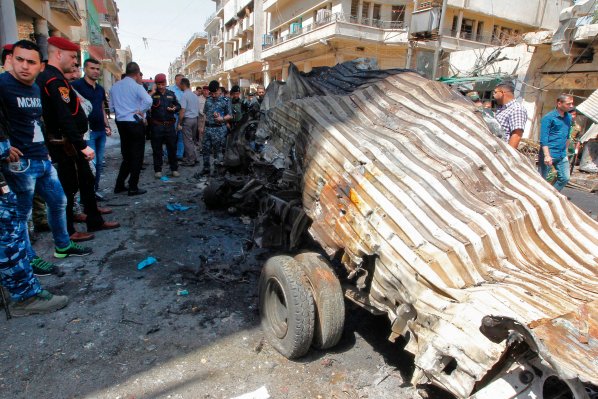 ISIS Is Turning Ramadan Into an Annual Killing Season
Next Up: Editor's Pick