A Gay Vulture Couple Hatched a Chick Together: 'They Proved They Can'

A gay vulture couple has hatched a baby chick at a Dutch zoo, marking a momentous milestone for the lovebirds that had been trying to start a family for months, their caretaker said Thursday.

The pair of male griffon vultures at the Artis zoo in Amsterdam recently welcomed a chick after taking in an abandoned egg in their aviary unit, zookeeper Job van Tol told TIME. While it’s common for same-sex couples to form in the animal kingdom, it’s rare in the bird world for two males to successfully hatch an egg, and it’s the first time this has happened at the Artis zoo.

“It’s a beautiful story,” van Tol said. “They proved they can.”

The dads, together for years, had been mating and started building nests in January. However, neither could produce an egg; only female vultures can do that. Their caretakers thought that was a “pity” because the two birds appeared to be a “really strong couple,” van Tol said.

That’s why zookeepers lunged at the opportunity to help them about two months ago when they found a neglected, fertile egg lying on the floor of the aviary. The egg was likely unclaimed by a female griffon vulture that had not yet bonded with a partner, van Tol said.

“We put our heads together and we thought this was the ultimate chance for our male couple to have a fertile egg. They have a perfect opportunity to raise a chick,” the zookeeper said. “It’s risky and a bit nerve-wracking because you don’t have any promises that they would understand how to raise a chick.”

The zookeepers put the egg in their nest and watched in awe as the two males took turns keeping it warm. In May, van Tol said he climbed up to the nest and was stunned. “I saw this little moving baby chick,” he said, adding that he signaled for another caretaker to come watch the young family in action. “It was a special moment. We fell into each other’s arms, which we never do. This we just couldn’t believe.”

“They did it. They hatched the egg,” he added. “For now, it’s 20 days old and it grows like crazy. They are such good parents. They do everything well. They are very protective. It’s beautiful.”

The fathers split their duties evenly, taking turns caring for their young, foraging for food, feeding it and defending the nest. There’s no guarantee of what the future holds, but griffon vultures are monogamous animals and tend to stay in couples for years, according to van Tol. “After one year they don’t say, ‘Bye, this doesn’t work out for me.’ They have a real connection with each other,” he said. None of the three birds in the family have been named.

While there are 1,500 species of animals known to form same-sex couples, it’s rare for gay bird couples to find or take an unattended egg and then hatch it.

“Homosexual relationships within the animal kingdom are very widespread,” van Tol said. “There’s so much to learn about that.” 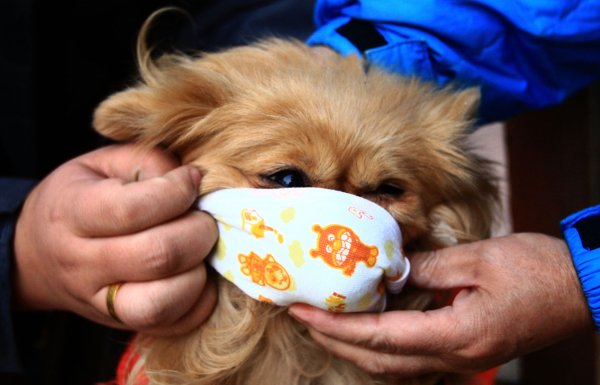 A Highly Contagious Dog Flu Has Hit Florida. Here’s What to Know
Next Up: Editor's Pick