Science, like so many other things, has tipping points. Figure out how to isolate and identify one virus and you’re on your way to bagging them all. Spot a single exoplanet and within a few years, you’ll have thousands. The same is true with the cosmic phenomenon known as gravitational waves. It was in 1915 that Albert Einstein first predicted that the fabric of spacetime itself could be set to rippling by a powerful enough force, but it wasn’t until 2015 that the first waves were spotted. Three months later, it happened again.

Now, investigators from the Laser Interferometer Gravitational-wave (LIGO) Observatories in Hanford, Wash. and Livingston, La., have announced a third detection. This one fills in a significant gap left by the first two breakthroughs and takes the science a big step forward.

In theory, anything can set off a gravitational wave. Roll a pair of bowling balls into each other on a trampoline and you could feel the collision radiating across the surface. A pair of pebbles would have a similar effect, but it would be too small to detect.

On the scale of the universe—which is roughly 46 billion light years in all directions—it would take bowling balls of a considerable size to create a disturbance that would generate a similar ripple noticeable on Earth. There aren’t many things with that kind of mass out there, but black holes will do nicely.

Binary star systems — two stars orbiting each other — are common enough in the universe, and so are binary black holes. As the two massive bodies spin down toward each other and then collide and merge, they release a burst of energy briefly equivalent to all of the light generated by all of the stars and galaxies in the universe. When the ripples from the collision reach and pass through Earth, they fleetingly distort the shape of the planet and everything on it. That distortion, however, is tiny — the equivalent of one ten-thousandth the diameter of a proton.

Such a vanishingly small twitch is not impossible to spot, but it’s not easy either.

In 2002, Caltech and MIT, with funding by the National Science Foundation, established two LIGO detectors, placed 1,900 miles (3,057 km) apart. Each detector is essentially a pair of vacuum tunnels positioned at a 90-degree angle, measuring 2.5 miles (4 km) per arm. A laser at the center is trained on a beam-splitter which causes the light to travel down both arms toward a suspended mirror. The beams should hit the mirrors at the same instant. If they fall out of synch — and if the distortion in tunnel length that caused it passes muster with the algorithms that analyze the frequency and intensity of the rippling — a gravity wave is considered tentatively detected. If the same change shows up in both detectors, ruling out local events like a rumbling truck or a construction blast, the detection is considered confirmed.

Just that kind of confirmation was announced by the LIGO team Thursday. “With the third confirmed detection of gravitational waves from the collision of two black holes, LIGO is establishing itself as a powerful observatory for revealing the dark side of the universe,” physicist David Reitze of Caltech, executive director of the LIGO Laboratory, said in a statement.

The new detection is estimated to have come from two black holes with a combined mass of 49 times our sun. That neatly fits between the larger first detection, at 62 stellar masses, and the smaller second one, at 21. That, in turn, reveals more about the nature and behavior of different kinds of black holes. What’s more, the latest ripples were caused by a collision that occurred 3 billion light years from Earth, much farther than the 1.3 and 1.4 billion light years of the first and second collisions, respectively.

“It is remarkable that humans can put together a story, and test it, for such strange and extreme events that took place billions of years ago and billions of light-years distant from us,” said senior LIGO research scientist David Shoemaker of MIT.

It is remarkable too, that one of those human beings was able to intuit that such events were possible, generations before the technology was available to prove it. Humanity’s genius, as often happens, was a big step ahead of humanity’s machines. 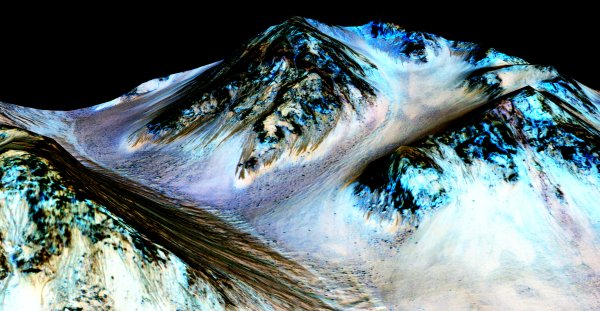