A Chinese woman wears a mask to protect from particles blown in during a sandstorm as she walks in the street on May 4, 2017 in Beijing, China.
Kevin Frayer—Getty Images
By Charlie Campbell / Beijing

Gazing through the smog at Beijing, where pollution regularly grounds flights, shutters schools and sends people gasping to hospitals, it’s hard to imagine China leading the fight against climate change. But that’s the role the world’s worst polluter found itself in on Thursday afternoon, after a Rose Garden press conference during which U.S. President Donald Trump announced American withdrawal from the Paris Climate Agreement.

“In order to fulfill my solemn duty to protect America and its citizens, the United States will withdraw from the Paris climate accord but begin negotiations to reenter either the Paris accords or really an entire new transaction on terms that are fair to the United States,” he said.

Nevertheless, even a temporary absence of the world’s largest economy off that landmark deal’s list of 195 signatories is a huge blow. (The only other dissenting nations are Syria and Nicaragua, who, to be fair, didn’t sign the accord because it didn’t go far enough.) The U.S. president’s election pledge to put “America First” could inflict appalling hardship on the world’s poorest people, according to environmentalists.

“Climate change is undeniable. Climate change is unstoppable,” U.N. Secretary-General Antonio Guterres was quoted as saying on the organization’s Twitter page in response to the news. “Climate solutions provide opportunities that are unmatchable.”

The Paris Agreement was finally sealed in December 2015 after years of faltering negotiations. It aims to keep global temperatures from rising more than 2°C (3.6°F) by 2100. Those targets were always optimistic, of course, though now look impossible, especially given the chilling effect open American opposition may have on other nations’ resolve.

Picking up the baton is, unsurprisingly, the E.U. as well as, somewhat more surprisingly, China. A joint statement calling the Paris Climate Agreement “an imperative more important than ever” is expected at a meeting in Brussels on Friday. While European leaders’ green credentials are well established, China has historically shied away from tackling the issue, instead insisting that economic development takes precedence over environmental degradation. In doing so, Beijing says it is only following the example of Western nations embarking on their own industrial revolutions during of the 18th and 19th centuries.

That viewpoint has now shifted as Beijing seeks to take more of a leadership role on the world stage. When he became the first Chinese leader to address the World Economic Forum in Davos in January, President Xi Jinping said, “The Paris Agreement is a hard-won achievement which is in keeping with the underlying trend of global development. All signatories should stick to it instead of walking away from it as this is a responsibility we must assume for future generations.”

Fine words, but the fact remains that China is by far the world’s biggest carbon emmitter — the U.S. is number two — where “airpocolyses” may be responsible for one in three deaths. The leaching of chemicals into waterways means 80% of underground wells are unfit even for bathing across the world’s most populous nation. Can China walk the talk?

“In the short run, substantively it will be difficult,” says Prof. Nick Bisley, an East Asia expert at Australia’s La Trobe University. “But symbolically China’s very well placed to take advantage of what looks like an America that’s essentially vacating the field.”

China reached a tipping point around 2013, when key polluting sectors such as coal, steel and cement were operating at full tilt to supply a booming real estate market. But that market has since slowed and emissions have followed suit. China’s concern over energy security compliments its focus on renewable sources, reducing the nation’s reliance on fossil fuel imports that could be held ransom to instability outside its borders. (At present, up to 80% of China’s energy needs pass through the vulnerable Malacca Strait chokepoint.)

Last year, China was the world’s largest renewable energy investor — amounting to $32 billion — and employs 40% of the sector’s global workforce. It will soon have the world’s largest solar farm in Qinghai province and the largest wind farm in Gansu. Five of the six largest solar manufacturing firms globally hail from China, where the cost of solar panels dropped 30% this year.

Ironically, given the basis of Trump’s Paris withdrawal, China looks at renewables as an employment creator rather than a drain. There are 3.5 million renewable energy jobs in China out of 8.1 million globally, compared to fewer than one million in the States. China’s National Energy Administration expects that new investment will create 13 million jobs in the sector by 2020.

“China has been leading, continues to lead today, and will continue to lead tomorrow,” Wu Changhua, Greater China director for the Climate Group, tells TIME. “The country is coming together to develop greener industries.”

Furthermore, China is better placed than the U.S. to instill green energy practices in the developing world. Xi Jinping’s signature Belt and Road Initiative — a trade and infrastructure network spanning the ancient Silk Road — also provides an opportunity to export green technology across Central Asia and Africa. The Beijing-based Asia Infrastructure Investment Bank — opposed by the U.S. though likely soon to boast 85 member nations — was founded in 2016 upon a promise to be “lean, clean and green.”

There are problems, of course. At home, an ambitious carbon trading system — twice the size of the European equivalent, in which companies are incentivized to upgrade with cleaner technologies and profit from selling carbon credits within emissions-capped industries — remains riddled with cooked books and falsified data. China’s top-down approach means electric cars and bikes are ubiquitous across its sprawling cities, though the heavily hitters with government links escape rigorous examination.

More critically, coal power still makes up two-thirds of China’s energy supply, contributing to 80% of CO2 emissions, and overcapacity in the industry means 21% of China’s wind power and 11% of its solar was wasted in the first half of 2016, according to the World Resources Institute. Domestic coal and oil consumption is falling, though that’s partly due to a slowing economy. Nevertheless, few believe this situation will reverse. “If you don’t have coal and you don’t have oil then your emissions boom story is over,” Li Shou, an East Asia researcher for Greenpeace, told a recent meeting at the Foreign Correspondent Club of China.

That said, tackling overcapacity in China’s leviathan state-owned enterprises — particularly, coal, concrete and steel — remains the greatest challenge to China’s green credentials. Much like in the U.S., there are powerful vested interests in the energy sectors that will resist government efforts to reform — not to mention the existential challenge that legions of unemployed coal and steel workers pose for the legitimacy of the Chinese Communist Party.

“Part of the problem is addressing the jobs issue,” adds Wu. “It’s a tough challenge but the political will is definitely there. It takes a lot of wisdom to get the right balance.” 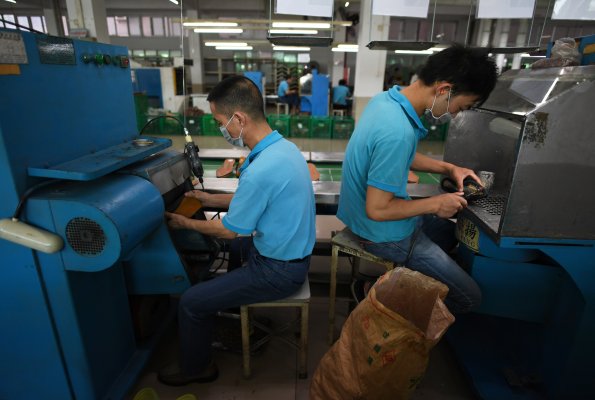 Detentions at Ivanka Trump China Shoe Factory 'Nothing New'
Next Up: Editor's Pick