A Highly Contagious Dog Flu Has Hit Florida. Here’s What to Know

An outbreak of the dog flu, which has sickened thousands of canines across the country over the last two years, has hit Florida for the first time. The highly contagious virus recently infected at least a dozen dogs in the Sunshine State, the University of Florida’s College of Veterinary Medicine said Wednesday. While the virus strain is not usually fatal and is not known to be transferrable to humans, it can spread rapidly and cause debilitating complications.

“There’s always that concern that another large outcome could happen again,” said Michael San Filippo, a spokesman for the American Veterinary Medical Association (AVMA), referring to an outbreak of the dog flu in Chicago in 2015, when hundreds of illnesses were reported. “We don’t want people to panic because typically, from what we know, it’s usually mild, although it can progress and can lead to other infections and be serious. We want to catch these things as early as possible.”

Here’s what to know about the dog flu:

What is the dog flu?

Canine influenza, more commonly known as the dog flu, is a respiratory disease that is easily spread among dogs, according to the Centers for Disease Control and Prevention (CDC). Symptoms are similar to what humans have when infected with the flu, including coughing, runny nose and fever. However, some dogs can suffer from life-threatening pneumonia. There are two different viruses, including the latest H3N2 virus, which was first detected in dogs in the U.S. in 2015. At the time, more than 1,000 illnesses were reported in Illinois, where it began, and several nearby states, according to the AVMA. At least six cases were fatal, the organization said. The dog flu has since been confirmed in more than 30 states, including Georgia, Massachusetts, New Jersey, Alabama, California, Texas, New York, Iowa, Michigan, Wisconsin and Indiana, according to Cornell’s Animal Health Diagnostic Center and Dr. Cynda Crawford, a clinical assistant professor of shelter medicine at the UF College of Veterinary Medicine.

What happened in Florida?

At least 12 dogs were recently diagnosed with canine influenza after either attending two dog shows or being exposed to infected animals from the events, health officials said. The disease appears to have stemmed from a dog show in Perry, Ga. and another in Deland, Fla. — both of which took place late this month. All dogs being treated are in stable condition, according to the Florida Department of Agriculture and Consumer Services. This is the first time H3N2 canine influenza has been found in the state, health officials said.

Crawford said dogs in the state face an “imminent threat.” Canines currently at the highest risk are those that participate in or go to dog shows, although the virus will likely also spread to other dogs outside of the show community, she said. “There is substantial risk for exposure,” Crawford said.

It’s unclear how many cases of canine influenza there currently are in the country, as statistics are generally tracked locally, not nationally, according to Edward Dubovi, a virology professor at Cornell’s Animal Health Diagnostic Center. The 2015 outbreak appeared to have ebbed by that October, said Colin Parrish, another virology professor at Cornell. But health officials in Chicago say the dog flu is still a problem in the area. The Chicago Veterinary Medical Association, which did not provide recent statistics, urged pet owners in March to be “vigilant” and “take necessary action steps “ to prevent their dogs from contracting the virus.

How can dog flu be prevented?

Pet owners can discuss with a veterinarian whether their dogs should be vaccinated for the virus. Dogs are at the highest risk of contracting the virus at animal shelters, boarding kennels, grooming salons, canine daycare, dog parks and other locations where the animals are in close quarters. Canines can also spread the virus to cats, health officials said. However, there is no vaccinations for felines, according to Crawford. The best way to protect cats from the illness is to keep them away from infected dogs. 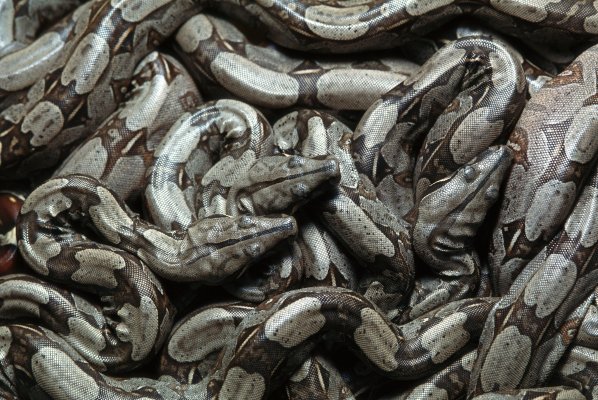 Be Afraid Because Snakes Hunt in Packs
Next Up: Editor's Pick