Just over 100 students will receive diplomas at the City University of New York School of Public Health commencement ceremony on Thursday, but the small graduation has already drawn national attention because of controversy over Muslim-American activist Linda Sarsour, who is set to deliver the keynote speech.

Sarsour’s selection drew criticism from some right-wing speakers and pundits, including Milo Yiannopoulos and Pamela Gellar, who both protested her speech at a rally outside the university last week. Sarsour’s critics have accused her of holding anti-Semitic views because of her comments on Islam and Middle Eastern politics, including her support for the movement to boycott, divest from and sanction Israel. New York Assemblyman Dov Hikind, who has led the push to cancel the speech, sent a letter signed by 100 Holocaust survivors to New York Gov. Andrew Cuomo.

“It’s a sad day for New York,” Hikind said, the Jerusalem Post reported. “Our most vulnerable citizens — elderly Holocaust survivors who understand the price of ignoring evil — have to cry out to their elected officials regarding something as obvious as not offering an official platform to a hate peddler like Linda Sarsour.”

Sarsour, who is of Palestinian heritage and was one of the primary organizers of the Women’s March on Washington, denied the accusations and said her beliefs have been mischaracterized. She told TIME on Wednesday that she was surprised by the wave of hostile messages and threats she received ahead of a relatively small event.

“There’s a conflation between the critique of the state of Israel and their policies with anti-Semitism, which I think is really flawed and inaccurate,” Sarsour said.

“I have no problem with people challenging my views and my positions. I want to be clear that I’m not asking anybody to stop challenging me,” she added. “But I will not accept being called an anti-Semite.”

Sarsour said she has given many previous speeches at universities over the years without this level of protest. She attributed the scale of the most recent backlash to her role in organizing the women’s march in January.

“I’ve always been Muslim, I’ve worn the hijab my whole adult life, I’ve worked on the same issues — criminal justice reform — the past 16 years,” Sarsour said. “But since the Women’s March on Washington, once the right-wing saw a very prominent Muslim-American woman in a hijab who was a Palestinian who was resonating with a community in a very large way, they made it their mission to do everything they can to take my platform away.”

Sarsour’s speech is the latest commencement address to spark protests and calls for cancellation this year, though in this case the charge hasn’t been led by students.

Ayman El-Mohandes, dean of CUNY’s School of Public Health, has stood by the decision to host Sarsour, saying “an open exchange of ideas is at the heart of our country’s strength, and our university’s strength.” Other CUNY professors and some Jewish leaders have also spoken out in her defense.

Sarsour said her commencement speech won’t delve into the controversy, but will focus on graduates who are pursuing careers that give back to their communities.

“I’m going to be focusing on the moment that we live in right now and the decisions we have to make as Americans, as social justice advocates in this moment,” she said. “It’s a moment to honor those amongst us who are the best amongst us.” 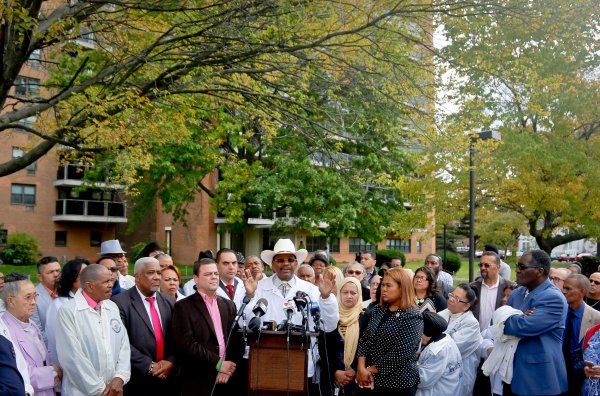 NYPD Sergeant Charged With Murder in Shooting of Mentally Ill Woman
Next Up: Editor's Pick