Here's Everything You Need to Know About the 2017 Tony Awards

Though it may not be as widely anticipated as the Hamilton-led 2016 Tony Awards, the 71st annual awards show is set to honor Broadway’s recent record-breaking season.

Broadway’s biggest night kicks off on June 11 at 8 p.m. E.T. at New York City’s Radio City Music Hall, featuring a number of performances from nominees — and perhaps one from its presidential host, Kevin Spacey.

Here’s everything you need to know before the show.

Kevin Spacey will host this year’s Tony Awards, just weeks after the fifth season of House of Cards premiered on Netflix.

Perhaps best known for his work in film and television, the Oscar-winning actor is also a Tony winner. He won Best Featured Actor in a Play in 1991 for his performance in Neil Simon’s Lost in Yonkers. He has also appeared in six Broadway productions throughout his career.

“I was their second choice for Unusual Suspects, fourth choice for American Beauty and 15th choice to host this year’s Tony Awards,” Spacey said in a statement. “I think my career is definitely going in the right direction. Maybe I can shortlisted to host the Oscars if everyone else turns it down.”

He follows James Corden, the late-night host who ran last year’s show where Hamilton swept up 11 awards — just one shy of the record held by The Producers’.

The cast of Natasha, Pierre & the Great Comet of 1812, led by nominee Josh Groban, will perform a mash-up of songs.

Ben Platt, the favorite for best actor in a musical, will belt out the hit “Waving Through a Window” with the cast of Dear Evan Hansen. And the cast of Falsettos, which includes Christian Borle and Andrew Rannells, will reunite for a performance.

There will be other performances by the casts of Bandstand, Come From Away, Groundhog Day The Musical, Miss Saigon and Hello, Dolly!.

The Radio City Rockets and 2016 Tony Award winners Cynthia Erivo, of The Color Purple, and Leslie Odom Jr., of Hamilton, will also perform.

A number of celebrities in and outside of the Broadway world are expected to present at this year’s awards.

And several nominees will also take the stage as presenters, including Hello, Dolly!‘s Bette Midler, Dear Evan Hansen‘s Ben Platt and Josh Groban, who is starring in Natasha, Pierre & The Great Comet of 1892.

Playbill reported that Hello, Dolly’s Bette Midler, a favorite for Best Actress in a Musical, is not expected to perform at this year’s ceremony following a disagreement between the the Broadway show’s producers and the Tony’s producers. Producer Scott Rudin had offered Midler’s performance on the condition that it could be done at the Shubert Theatre — where the show is performed — but the Tony’s producers declined.

But there will still be a performance from Hello, Dolly! at the show Sunday, the Tony Awards announced Thursday. It is unclear if Midler herself will perform.

How do I watch?

Viewers can watch the Tony Awards on CBS at 8 p.m.

If you don’t have a TV, you can still stream the show live at CBS.com, though it requires a cable log in.

The show is also accessible on CBS All Access, which costs $5.99 a month, for those with an Apple TV, Roku or Fire TV.

And for people without cable, the Tony Awards will be sharing behind-the-scenes footage and updates on its social media pages, as well as livestreaming the red carpet at 5:30 p.m. E.T. 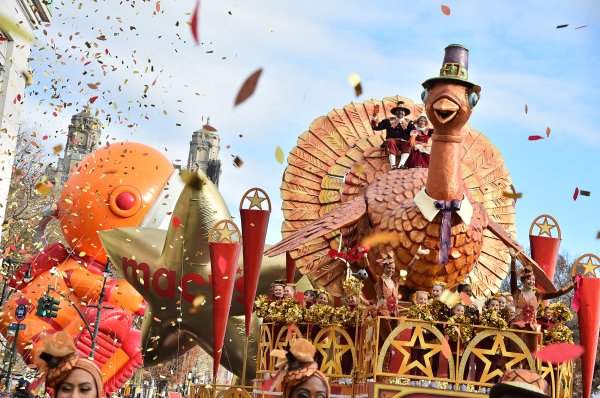 Here Are All the Broadway Performances From This Year's Macy's Thanksgiving Day Parade
Next Up: Editor's Pick