President Trump Is Expected to Withdraw From the Paris Climate Agreement

President Donald Trump has told aides he intends to pull out of the Paris climate agreement, throwing into doubt a landmark treaty that scientists have said is vital to combating global warming.

According to two White House officials, the President has not yet decided on how to withdraw from the agreement — either through a multi-year formal process or the more extreme act of quitting the United Nations Framework Convention on Climate Change. The aides cautioned any decision isn’t final until it is announced, and that the President is still being lobbied by others to remain in the agreement.

Amid multiple reports that he had decided to withdraw, Trump said an announcement would come soon. “I will be announcing my decision on the Paris Accord over the next few days,” Trump said Wednesday morning on Twitter.

Trump made withdrawing from the agreement, negotiated by former President Barack Obama in 2015, a central focus of his campaign, arguing that it overburdened U.S. consumers and energy producers with carbon pollution limits that didn’t apply to developing economies. But since he won the White House, the decision whether to fulfill that promise has been among the most fraught within his administration, dividing the Trump family and top aides along ideological and nationalistic lines.

Trump has also been the subject of ferocious international lobbying from leaders across the globe to remain in the agreement. The subject was a centerpiece of the G-7 meetings in Italy last week, where the leaders failed to reach consensus on climate issues because of Trump’s dissension. Trump was also pressed by Pope Francis to remain in the accord, and the Pope gave Trump a copy of his encyclical on climate change. All signatories to the UN climate change treaty have signed onto the Paris accords except for Syria and Nicaragua.

Obama entered the agreement without seeking ratification from the GOP-controlled Senate, making it easier for Trump to quit the agreement.

Within the White House, the divisions tend to break along increasingly-familiar lines: Scott Pruitt, the Environmental Protection Agency administrator, and chief strategist Steve Bannon favor pulling out, while Secretary of State Rex Tillerson, Director of the National Economic Council Gary Cohn and senior advisor Jared Kushner are all reportedly in favor of staying in. Withdrawal would allow Trump to fulfill a campaign pledge and may appeal to supporters of his inward-looking “America First” platform. But policy experts warn of the potentially significant downsides, including ceding global leadership on climate policy to China and Europe.

Trump could also adopt a third option. Since many of the nation’s commitments to the Paris Agreement are voluntary, there are no concrete penalties if the U.S. fails to meet them. As a result, Trump could change U.S. commitments, preserving its role at the table while adopting less-stringent greenhouse gas reduction targets than those set under the Obama administration. Trump has already said that he will cancel U.S. payments to a UN fund dedicated to supporting climate change initiatives in the developing world. 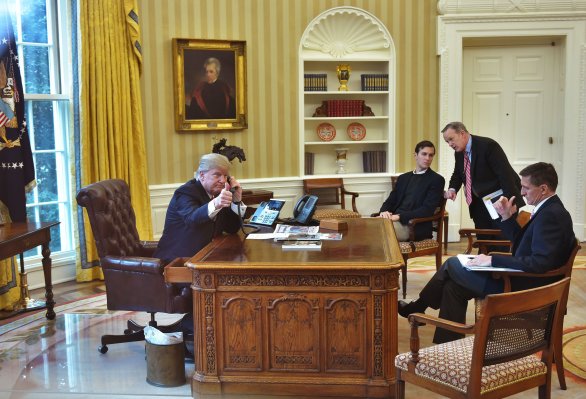