A group of girlfriends gathers at Baby’s All Right, a Brooklyn bar, to play a Tinder drinking game.
Therese + Joel for TIME

The first time I swiped, I was sardined between friends on a train back to New York City. With an hour to go and conversation running dry, we decided to download a smartphone app we kept seeing people use during our weekend away: Tinder. Suddenly the screen of my phone was inundated with an ever updating stream of male suitors: loafer-wearing Kip, 28, popping champagne on the deck of a boat (pretentious–swipe left!); shirtless Aaron, 31, winking at his reflection (bathroom-mirror selfie–swipe left!). My fingers were moving so quickly, I almost mistakenly swiped left for tall, dimpled Peter, 30, smiling from a mountaintop (swipe right!). I soon experienced my first Tinder high–the endorphin rush of a match. Somewhere “5 miles away,” Peter liked me too. I was hooked.

Tinder is a 17-month-old location-based dating app that boils romance down to the basics: users specify their preferred range of age and proximity and are shown corresponding photographs of nearby potential mates along with cursory information imported from Facebook. Users can swipe right for “like” or left for “nope.” When two people swipe right for each other and produce a match, they get the option to “send message” or “keep playing.”

Tinder is one of a host of new mobile dating apps based on a system of snap judgments that function kind of like a game. At 26, I’m smack in the middle of the demographic these companies are trying to woo. We’ve been dubbed the hookup generation, ambitious multitaskers who commit reluctantly and are obsessed with digital distractions. This is both true and an oversimplification. These apps play to stereotypes while simultaneously perpetuating them. Because even if we typically marry three to four years later than Gen Xers, we still (eventually) want love, and it’s too soon to know if this crop of dating apps will make finding it easier or leave us trapped in a new kind of flirting limbo.

Dating has always been something of a game, but it’s now built into a device we carry and check some 150 times a day. Traditional dating sites like eHarmony and Match.com were designed to narrow down an endless stream of potential matches to that one right fit–the presumed goal being the user’s exit from the game. But many of the new apps aimed at a younger audience revel in the wide stream. Their creators have developed addictive interfaces designed to keep their user base constantly stimulated, engaged and plugged in. Profiles are simple to set up and just as easy to dismiss. It’s like Grand Theft Auto for your hormones.

Tinder even takes its visual cues from a classic game: the stack of dating-profile photos displayed in the app was modeled after a deck of cards. “When you have a deck or a pile of cards,” says Sean Rad, co-founder of the Los Angeles–based company, “the natural urge is to interact with it.” The swiping motion that helps make Tinder addictive was already popular in mobile games like Candy Crush, which users “play without thinking much about any one move,” according to Sebastian Knutsson, Candy Crush’s chief creative officer. “That’s also what Tinder provides.” Mindlessly swiping through hundreds of pictures is a habit that’s hard to break, whether it’s candy icons or people.

Tinder won’t disclose its total number of users, though co-founder Justin Mateen says it has added 1 million in the U.S. during the past 60 days. Around the world, users–the majority of whom are 18 to 24–swipe about 500 million times a day. And they’re split pretty evenly between men and women, according to the company.

While Tinder popularized dating apps, the trend began in 2008 with Grindr, a location-based app for gay men. A fall report from the Pew Research Center found that 1 in 10 Americans has used a dating site or app, and new companies are proliferating to meet the demand. Hinge, which launched a year ago, offers a more limited number of daily matches culled from your pool of acquaintances–like a party at a friend’s house compared with other apps’ huge, loud clubs. Hinge users receive just five to 15 matches per day, delivered at noon. “The countdown creates a trigger in people’s minds,” says Justin McLeod, the company’s founder and CEO. He credits the popularity of the game Farmville with conditioning people to play appointment-style games. “If you don’t water your plants at 3, they’ll die,” he says.

Let’s Date, a 16-month-old app, lets users guess who liked their profiles from a series of options. Guess correctly and you’re rewarded with the option to connect. Zoosk, another entrant, has incorporated digital currency, gift giving, rewards and countdown clocks to keep people using its product. The six-year-old service now has 25 million members, and its app is consistently one of the top 20 highest-grossing in the iTunes store.

The Games Inside the Game

I kept swiping on Tinder after that first train ride partly because I was single and looking but also because these apps are a millennial’s fantasy. Instant connections! New friends! Constant affirmation! Rejection is conveniently (and quickly) erased because you see only matches, and there are so many pairings that I didn’t take it personally if some swipes weren’t reciprocated. And it didn’t really matter whether the endorphin hit came from an eagerness to date a match or simply because I felt I’d somehow already won by getting a Like.

This is, apparently, normal. Catalina Toma, a professor of communications at the University of Wisconsin and an expert in the social and psychological effects of online dating, explains the addictive rush in terms of what psychologists call operant conditioning. “You get a reward”–here, a match–“on a variable schedule, [not knowing] when it’s going to happen. It’s like playing slots at a slot machine. You keep trying it out, and sometimes you get a reward and sometimes you do not. And the fact that your behavior gets rewarded sometimes incentivizes you to play more because you think it might come at any moment.”

Not every user, however, is hooked by the prospect of finding love. My friend Danny has an ongoing text-message chain with his friends sharing pictures of women on Tinder who seem to embody the meme of the moment. That gave rise to their Tumblr blog devoted to pictures of women posing with fake mustaches on Tinder. Josh Dubin, 19, a sophomore at Washington University in St. Louis, says he and his friends use the app for juvenile bets. One involved competing to be the first to hook up with a girl they met through Tinder. Another revolved around the procurement of naked pictures.

Some have turned Tinder into another pastime: the drinking game. One Friday in January, 11 women in their mid- to late 20s gathered around a long table at a bar in Brooklyn to play. At first glance it looked antisocial: heads bowed while hands swiped across phone screens. Then one player punched her phone in the air and announced that she had spotted a guy posing with an unidentified child in his dating profile. “Kid in the picture, and he hasn’t specified it’s his sister’s. Drink!” With loud cheers, the party suddenly turned boisterous as the women called out other rules that mandated a sip. Six women each swiped guys posing with the rapper Drake. Another came across three men posing with sedated tigers (“and a tarantula”) in one night. One 25-year-old woman in attendance keeps at it even though she has found a match. She says her boyfriend doesn’t mind because she’s simply playing a game.

But most women I know, whether they admit it or not, approach these dating apps with the veiled hope of finding something more than a virtual match consummated only by a mutual swipe. Katie Vidmar, 26, says apps allow her to find a woman to date without “the awkwardness of not knowing [if a woman is a lesbian]” that she experiences at bars. “I don’t intend to meet the love of my life on Tinder,” says Meagan Friedman, 29, “but who knows? Maybe.”

Indeed, swiping as entertainment wears thin. As much as I liked playing the game, a few months and more than 100 matches after I’d first downloaded Tinder, I realized that if someone was winning, it certainly wasn’t me. I decided to stop spending all my time weighing virtual options and actually go out on a date. So I said yes to the first suitable guy to ask me out.

When Alex showed up at the rooftop beer hall of Manhattan’s Eataly, he was 20 minutes late and 20 lb. heavier than his Tinder photos suggested. Still hopeful, I waved him toward our table to make small talk. But when he told me that by “freelance chef,” he meant “fired waiter,” I realized this wasn’t going the way I’d hoped. It probably didn’t help that he was well past his 60th Phish concert. We split the check and parted ways with an awkward hug.

I don’t know why I was so disappointed. This was not my first, or worst, bad date. Perhaps it was the game. While some regularly meet up with their online matches, it took me 111 to get to a real-world date. And if Tinder’s 100-to-1 swipe-to-match ratio holds true, that means I went through 11,100 swipes to get there.

What I learned was that the overwhelming number of romantic possibilities an app like Tinder offers can delay the decision to commit even to a meeting. “There’s no question about it,” says Helen Fisher, a biological anthropologist at Rutgers University. “The more opportunities you have, the less likely you are to meet any of them.”

The new dating apps have parallels with the famous study in which researchers set up one grocery-store display with 24 different types of jam and another with six. While only 3% of shoppers bought a jam when confronted with two dozen options, 30% of those with fewer choices made a purchase.

But Fisher doesn’t rule out these apps’ ability to help people find love. Picture selection can indicate a lot about a person, and physical attraction has always been a key determining factor in mating.

Hope is fueled by stories of real matches made via app, however rare. Christopher and Janie George went on their first Tinder date last March when Janie, 19, invited him to accompany her to the NCAA basketball tournament using tickets she’d received from a different Tinder acquaintance. “The first thing her dad said to me was, ‘Hey, you aren’t one of those Tinder boys, are ya?'” Christopher, 26, recalls. “I just said no.” He came clean before walking down the aisle of the Mormon Temple in Salt Lake City in January.

Besides, I’m not sure I can go back to analog dating. I use Netflix to suggest movies and Pandora to suggest music, and my phone and apps are central to my life. So I’ll keep using these services. Frustrating as this game is, sometimes it works. Sometimes you get a real-life experience that makes the swiping worth it. My first Hinge date took me on the Staten Island Ferry. We were engrossed in the view of the Statue of Liberty as commuters around us bent over their screens playing Candy Crush. Before the date ended, we made plans to meet again. Whether or not it’s game over, at least I’m enjoying this round. 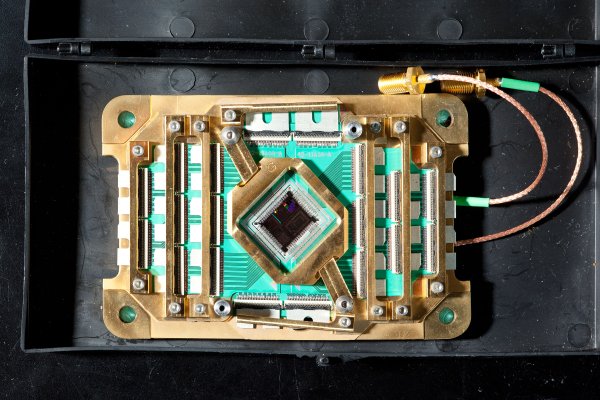 The Quantum Quest for a Revolutionary Computer
Next Up: Editor's Pick