Obamacare: Mend it, Don’t End it

The endless, blindingly obtuse debate about the Affordable Care Act–also known as Obamacare–has been almost entirely about politics, not substance. There are two reasons for this. We haven’t had much real substance to go on. And politics is a lot easier for us wizards of the media to report and opine upon. The abysmal debut of the HealthCare.gov website is a lot easier to comprehend–government can’t tie its own shoelaces–than the heroic efforts to bring the site back to life. The people who “lost” their insurance because of new coverage requirements are more famous than those who were able to get better, cheaper coverage through the new government health care markets. (Actually, they’re many of the same people.) The fact that 7.1 million people signed up for insurance is more important than who they actually are: Were they uninsured in the past? Will they pay their bills? Will they get the care they’re paying for? Will the system be able to handle all the new traffic?

But we have now turned a corner. the system is up and running. It has 7.1 million customers (plus 4.5 million more in the expanded Medicaid program). The word of mouth seems to be … not bad: a recent ABC News–Washington Post poll actually had more Americans in favor of Obamacare than opposed to it, by an overpowering 49% to 48%. Those numbers may well improve over time as the public learns that the program isn’t the socialist cataclysm that Republicans predicted. It may even happen by November. It is not impossible that Americans will be pleased that a significant social injustice has been rectified: the hardworking poor finally have health care protection, just as the indigent on Medicaid have had. Indeed, there is one political thing that we know for sure: the Republicans have lost this debate substantively. The law won’t be repealed. “There is no off switch,” says Professor John DiIulio of the University of Pennsylvania, who is studying the system from the bottom up in 35 states. “There are financial obligations to the people who have signed up [and receive subsidies from the government]. There are 50 different stories here. The program is different in every state. That makes it difficult to formulate a national policy response,” whether it be repeal or sweeping reform.

Which doesn’t mean the Affordable Care Act doesn’t need reform. It is a slovenly piece of legislation that will need constant modification and in some cases structural overhaul. The very notion that there are 50 stories here demonstrates a glaring inefficiency. There should be four or five regional exchanges–they should be supermarkets, not corner stores, providing greater economies of scale. There ought to be (as six moderate Democratic Senators proposed) a wider variety of insurance options, including plans with lower premiums and higher deductibles. There should be fewer mandated coverages: if the Jones family believes it receives all the mental-health counseling it needs through its church, it shouldn’t be required to pay for mental-health coverage. Businesses that currently provide health coverage for their employees in the private market, especially moderate-size companies, should be free to shop for better deals in the health care exchanges. The President has been open to negotiation on most of the above, as well as conservative evergreens like medical-malpractice reform.

A recent Kaiser family foundation poll shows that 59% of Americans want to see this program improved, not repealed–another reason the Republicans have lost this debate. There are legitimate arguments against government expansion, but the Republicans haven’t been making them. Instead they’ve resorted to fear tactics (remember “death panels”), demagoguery (socialism!), concocted bad-news stories and irrelevant bean-counting. One reason the 7.1 million people signing up became such a big deal is that Republicans made it a litmus test. Given public disgust with the noxious atmosphere in Washington, you might expect that the GOP would be ripe for a reset on this issue. They could argue, We’re gonna reform this thing, make it an efficient free-enterprise model for the world. After all, the bone structure of Obamacare–the exchanges, the individual mandate–came out of the conservative Heritage Foundation 25 years ago.

But no. John Boehner and other GOP leaders sent a reflexive message to the 7.1 million enrollees: they’re still against it, no retreat, no surrender. That makes political sense in a dull, conventional-wisdom way. Current polls have them winning the House and perhaps the Senate in November. But what happens if Obamacare brings better coverage to millions of Americans between now and then? What happens if the good-news stories start outplaying the bad? Politics is never static, especially seven months from Election Day. 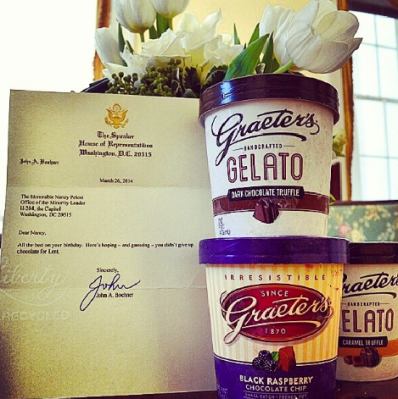 John Boehner Gave Nancy Pelosi Chocolate for Her Birthday, Which Is a Bummer 'Cause She Gave It Up for Lent
Next Up: Editor's Pick