The History of the Confederate Flag Isn't Just a Southern Issue

A person in opposition to the removal of monuments to the Confederacy holds confederate flags against the Robert E. Lee statue in New Orleans on May 7, 2017.
The Washington Post / Getty Images
By Kevin M. Levin / History News Network

On the morning of May 30, 1950, Bostonians awoke to news that a Confederate battle flag had briefly flown above the Massachusetts State House, just blocks from where William Lloyd Garrison published his abolitionist newspaper, The Liberator, and across the street from August Saint-Gaudens’s beautiful relief statue of Colonel Robert Gould Shaw and the 54th Massachusetts Volunteer Infantry. The motivation for flying the “Rebel” flag was never revealed.

Last week the nation watched as the city of New Orleans removed the last of its Confederate monuments, after a bitter public debate, but readers may be surprised to learn that communities across Massachusetts and other parts of the country continue to struggle to come to terms with Confederate iconography, especially in our public schools.

In 1968 Walpole High School turned toward Dixie when it hired John Lee from the University of Memphis to coach its football team. Students soon referred to the team as “General Lee’s Rebels.” Yearbooks from the period suggest that the school community had little difficulty adopting the Confederate banner as a symbol of pride. While Walpole adopted the “Rebel” as its school nickname before the introduction of Lee to its coaching staff, the school embraced the moniker in connection to the Confederate soldier. Students attended football games well into the 1980s waving the battle flag as a sign of their school spirit.

At around the same time in nearby Vermont the new South Burlington High School also adopted the “Rebel” nickname. Yearbooks from both schools suggest that the battle flag was embraced widely and with little question in these majority white communities even as the flag was embraced as a symbol of “Massive Resistance” in the South against African Americans pushing for civil rights.

Both schools struggled to come to terms with their Confederate past as their communities become more ethnically and racially diverse and as it became more difficult to identify with Confederate symbols without acknowledging the Confederate government’s goal of creating an independent slaveholding republic built on white supremacy. South Burlington retired their Confederate Colonel as its official mascot in the 1990s and both schools have recently dropped the “Rebel” nickname.

While these schools, with the help of its students, have managed to move on from a long-standing institutional affiliation with Confederate battle flag, other schools have recently found themselves on the front lines of this debate. Last year a student at Newton North High School flew a Confederate flag out of his window on school property while earlier this year another student wore clothing with a Confederate flag to school at Easthampton High School.

Both incidents and countless others in schools across the country followed the horrific murders of nine African Americans at the Emanuel A.M.E. Church in Charleston, S.C., in 2015 by Dylann Roof, who closely identified with the Confederate battle flag as a symbol of the race war that he hoped to start. Recent incidents involving the battle flag across the Bay State in Williamsburg, Boxborough, Greenfield, and Framingham come at a time of increased racial tension and cannot be understood apart from the rise of the “Black Lives Matter” movement and the racial rhetoric heard on the presidential campaign trail.

The embrace of the battle flag in Massachusetts overshadows the state’s crucial role during the Civil War. Communities across the state answered President Lincoln’s call to put down the rebellion in 1861. Young men went off to war. Some died in battle and others from disease while others returned home with memories that plagued them for the rest of their days. In the years following the war, veterans joined the rest of their communities to dedicate cemeteries and decorate graves on what was called Decoration Day—what we now call Memorial Day. These cemeteries and monuments attest to the importance the Civil War generation and their children placed on remembering the fallen and on their role in saving the Union and abolishing slavery.

On Friday, May 19, as the crews removed the Robert E. Lee monument, the mayor of New Orleans spoke to his community about why honoring these men is no longer justified: “The Confederacy was on the wrong side of history and humanity. It sought to tear apart our nation and subjugate our fellow Americans to slavery.” Those words should echo in every community across this country, including Massachusetts.

Kevin M. Levin is a historian and educator based in Boston. He is the author of Remembering the Battle of the Crater: War as Murder (2012) and is currently at work on Searching For Black Confederate Soldiers: The Civil War’s Most Persistent Myth. You can find him online at Civil War Memory and Twitter @kevinlevin. 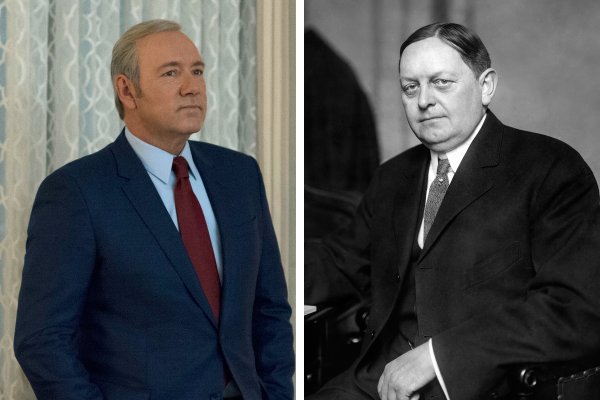 Why the Real Congressman Underwood Never Became President
Next Up: Editor's Pick