Christiana Figueres: The Air Is Making Us Sick, But We Could Fix It

A woman wearing a protective pollution mask rides a bicycle in Beijing, China, on March 20, 2017.
Nicolas Asfouri—AFP/Getty Images
Ideas
By Christiana Figueres
Figueres was executive secretary of the United Nations Framework Convention on Climate Change from 2010 to 2016, is the co-founder of Global Optimism, co-host of the podcast “Outrage & Optimism” and is the co-author of the recently published book, “The Future We Choose: Surviving the Climate Crisis.”

Rising air pollution levels in our cities that impact the health of people and planet are becoming impossible to ignore. So much so that China closed the last working coal power plant in Beijing this March, paving the way to a future of clean energy and air for its inhabitants.

This kind of radical change for cities must now become the norm, because by 2050 it is estimated that more than two-thirds of us will define ourselves as city dwellers.

Thousands of cities are already breaching their annual air pollution limits — often within days — and the oldest, the youngest and, more generally, the most vulnerable people are suffering at a disproportionate rate. In London, where I live, air pollutants are the reason scientists recently advised residents to use plastic covers over strollers when taking their children to school.

Across the Atlantic, the American Lung Association’s 2017 State of the Air report found that 125 million Americans live with unhealthy levels of pollution, placing them at risk of premature death and other serious health effects, such as lung cancer, asthma attacks, cardiovascular damage, and developmental and reproductive harm. Meanwhile, in India, half of Delhi’s 4.4 million children are blighted by permanent lung damage that they will never fully recover from.

We therefore have a strong moral imperative to stop this madness and, thankfully, we also have all the tools and technologies we need to do it. These tools mean we can carry on with our daily lives without polluting our air, and therein lies our economic imperative to act: Investing in and fully adopting clean technologies is one of the biggest growth opportunities of our time.

These technologies bring the added benefit of slowing climate-changing emissions, which are heating up the planet, causing further health risks to us all. A recent study from The International Renewable Energy Agency showed that efforts to slow climate change won’t just keep the planet habitable, they will boost the world economy by $19 trillion, generating millions of new jobs.

So let us be clear: There is a very strong link between the decarbonized, economic growth of our cities and global health. In 2015, The Lancet published a report highlighting the linkages between health and climate change, stating: “tackling climate change could be the greatest health opportunity of the 21st century.” This was in the same year that 800 hospitals, 1,700 health organizations and 13 million health professionals mobilized to call on governments to secure the historic climate agreement in Paris.

They did this because the health of our people and our climate are inextricably linked, and the next few years represent a game-changing opportunity to improve air quality in the near-term, saving millions of lives, while simultaneously improving the future prospects of everyone.

We have a timeframe for action — science has made it clear that to protect the promise of Paris, we must bend the curve of greenhouse gas emissions by 2020 so that they begin their steady decline. Bending the curve by then will give us the best chance of achieving the 2030 Sustainable Development Goals and ensuring we reach a fully decarbonized economy by 2050.

In pursuit of this 2020 milestone, it is clear that improving urban health will be one of the surest ways of accelerating the already powerful momentum towards a decarbonized economy. In particular, we need to work together to ensure that zero-emission transport is the preferred form of all new mobility in the world’s major metropolises by 2020 and, concurrently, that all cities, states and regions have established plans, policies and regulations with the aim to fully decarbonize infrastructure by 2050.

One of the biggest bonds we share as people on this planet is the common desire to enjoy good health. Our health professionals are trained to handle the awe-inspiring responsibility of tending to the sick and helping them recover from their diseases wherever possible. They were crucial partners in the anti-tobacco campaigns of the late 20th century, and now these same individuals and their institutions have the potential to profoundly shift the political landscape in favor of a healthier, urban future.

With that in mind, Unmask My City — which officially launched on World Asthma Day on May 2nd — is a new initiative calling for solutions in 12 major cities around the world that are currently experiencing major air pollution challenges. Already, global health practitioners are uniting under Unmask My City to urge decision-makers to cut their air pollution levels in line with the World Health Organization’s guidelines so that we can get into the green, healthy zone by 2030.

As Vice Chair for the Global Covenant of Mayors on Climate and Energy, this strengthens my optimism, because I know how powerful the health community is when mobilized. Let’s not be late to grasp this moment to protect our cities, so that future generations can continue to flourish within them. 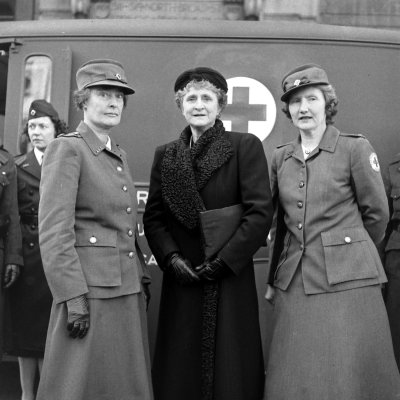 Unpublished Photos Capture the Lifesaving Role of Nurses in World War II
Next Up: Editor's Pick