What the World Got Wrong About the Russian Revolution

Like 1789, when the French Revolution erupted, 1917 has entered the lexicon of world-historical dates all educated citizens are expected to know and remember. The meaning of 1917, however, remains much contested, not least because two very different revolutions took place in Russia that fateful year. The February Revolution toppled the Russian monarchy and ushered in a brief era of mixed liberal and socialist governance, only to be superseded by the more radical October Revolution, which saw Lenin’s Bolshevik Party impose a Communist dictatorship and proclaim an open-ended world revolution against “capitalism” and “imperialism.” Each of these developments was significant enough to merit serious historical study. Together they constitute one of the seminal events of modern history, which introduced Communism to the world and paved the way for decades of ideological conflict, culminating in the Cold War of 1945–1991.

Because the Bolsheviks were avowed Marxists, our understanding of the Russian Revolution has long been colored by Marxist language, from the idea of a class struggle between “proletarians” and the “capitalist” ruling classes, to the dialectical progression from a “bourgeois” to a socialist revolution. Even many non-Marxist historians tended, in the Cold War years, to accept the basic Marxist framework of discussion about the Russian Revolution, concentrating on such matters as Russia’s economic backwardness vis-à-vis more advanced Western capitalist countries, the stages of her emergence from feudalism and her “belated” industrial development, inequality and Russia’s lopsided social structure, and so on. As late as 1982, Sheila Fitzpatrick, in an influential college textbook titled The Russian Revolution, described Lenin’s aim in the October Revolution unambiguously as “the over- throw of the bourgeoisie by the proletariat.”

This relatively uncritical approach to the Russian Revolution proved surprisingly resistant to revision over the decades, in part because the great anti-Communist writers of the Cold War years, from George Orwell to Alexander Solzhenitsyn to Robert Conquest, focused on Communism in its period of Stalinist “maturity” in the 1930s and 1940s, not on its origins in the Revolution. Serious new studies of the February Revolution did appear, such as George Katkov’s Russia 1917 (1967) and Tsuyoshi Hasegawa’s February Revolution (1981). Not until Richard Pipes’s The Russian Revolution (1990) however, was there a serious reappraisal of the revolutions of 1917 as a whole. What happened in Red October, Pipes asserted, was not a revolution, not a mass movement from below, but a top-down coup d’état, the “capture of governmental power by a small minority.” Far from being a product of social evolution, class struggle, economic development, or other inexorable historical forces foreseen in Marxist theory, the Russian Revolution was made “by identifiable men pursuing their own advantages,” and was therefore “properly subject to value judgment.” Pipes’s judgment of these men was withering.

Coming out at a time when the Soviet Union was in the process of collapsing, Pipes’s thoroughly revisionist study acted like a wrecking ball, demolishing any last claim the Russian Communist Party had to democratic, popular, or moral legitimacy. Pipes was even called as an expert witness in the Nuremberg-style trial of the party’s crimes convened in 1992 (and then quickly abandoned) by Russian president Boris Yeltsin’s post-Communist government. Although many Soviet specialists scoffed at Pipes’s revisionist history as irretrievably biased (Pipes had worked as an adviser to the Reagan administration in 1981–1982), no one could ignore it. In the long-running debates about Communism between sympathizers and “Cold Warriors,” it seemed that the sympathizers had been placed squarely on the defensive, if not routed for good.

A quarter-century later, there are signs that the political worm is turning again. Works such as Thomas Piketty’s 2013 international best seller Capital in the Twenty-First Century, along with the popularity of openly avowed socialists, such as Bernie Sanders, with young voters in previously socialism-unfriendly America, suggest that Marx may be poised for a surprising comeback. For “millennial Marxists,” as the Nation magazine has described the wave of young activists motivated by the “scourge of inequality,” the financial crash of 2008 has more resonance than the fall of the Berlin Wall in 1989, which marked the end of Communism in eastern Europe, or the collapse of the USSR in 1991. By many measures (such as the “Gini coefficient”), social inequality is indeed rising sharply in Western countries, which lends ammunition to ever-broader indictments of capitalism. We can surely now expect counterrevisionist books on the history of Communism, as younger historians revive the old dream of social revolution.

An event as consequential as the Russian Revolution will always be used and abused in political argument, as an epochal transformation that brought the oppressed workers and peasants of Russia either liberation (“peace, land, and bread”) or enslavement, depending on one’s political sympathies. Edifying as these parables may be, they bear only passing resemblance to the actual events of 1917, which historians, granted access to original documentary material only after the fall of the Soviet Union and the opening of Russian archives, are still struggling to reconstruct.

Now that the Cold War is mercifully over, it is possible to treat the revolution more dispassionately, as a concrete historical event — controversial and significant in its lasting impact on world politics, but also worth understanding on its own terms, unmediated by our current prejudices. Half-true anecdotes and stories about the revolution, smoothed into well-worn grooves as they were told and retold according to historians’ evolving preoccupations over the decades, have come to replace the crooked timber of events in our memory. It is time to descend from the airy heights of ideological argument about 1917 and return to the solid ground of fact. By going back to the original sources, we can rediscover the revolution as it transpired in real time, from the perspective of key actors who did not know, as they acted, how the story would turn out.

Excerpted with permission from The Russian Revolution: A New History by Sean McMeekin (Basic Books, 2017). 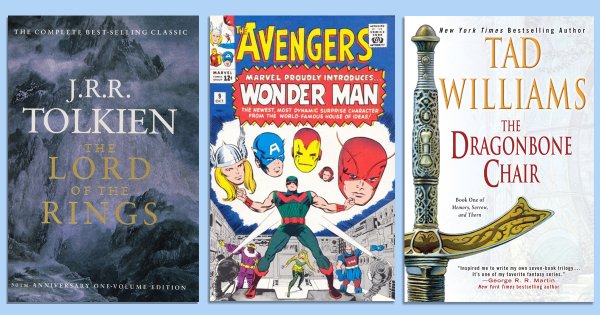 5 Books That Influenced How George R. R. Martin Wrote Game of Thrones
Next Up: Editor's Pick