This essay is part of a TIME series on the growing effects of antimicrobial resistance: superbugs that may no longer be treated with standard-course antibiotics. In 2016, World Health Organization leaders called drug resistance a “major global threat” estimated to kill 10 million people a year in 2050. This is the story of Chris Linaman, who survived a severe infection of the bacteria MRSA, which occurs most frequently in healthcare settings. The infection was resistant to antibiotics used to treat it.

I’ve always been an active person, and in the spring of 2005 I was playing basketball with my friends when I tore my ACL in my left knee. I went in for a standard surgery and was recuperating quite well. So well, in fact, that my family decided to go on vacation for Memorial Day weekend.

It wasn’t until I returned home after the long weekend that things started to look suspicious. I woke up one morning and my knee felt strange. I bent down to feel it and realized my knee was hot to the touch, bright red and had swelled to the size of a melon. I called my doctor and told him what had happened. “I need to see you right away,” he said.

The doctors drew some liquid from my knee and confirmed that I had a MRSA infection: a bacteria known as Methicillin-resistant Staphylococcus aureus, which is resistant to many antibiotics. My wife met me at the hospital, and I underwent the first of four emergency surgeries.

MORE: I Survived Flesh-Eating Bacteria—and It Changed My Life Forever

The doctors tried to clear the infection the best they could through surgery and lots of antibiotics. Eventually I was sent home to recover, and I was tasked with giving myself two to three daily intravenous doses of the antibiotic vancomycin. One afternoon I was napping in our living room, and my wife came in to wake me up for another dose of medicine. She discovered my face was so swollen that I was unrecognizable, and she struggled to shake me awake. When I finally came to, my temperature was 104 degrees. I felt like I was dying, and I said, “I feel like this is poisoning me.”

My wife is much smaller than I am, but we needed to get to the hospital ASAP. She put our children—who were four and two years old at the time—into their carseats, and she managed to drag and carry me to the car. I am 6’2” and 185 lbs. I don’t know how she did it. She says she was terrified.

At the hospital, the doctors told my wife that they were worried about my condition. If the infection had spread to my brain, she needed to prepare for the worst. I was not a good patient—I was scared to death—but thankfully the doctors were able to perform a spinal tap and confirm that the bug had not spread to my brain yet. I went in for another surgery and more antibiotics. Unfortunately, I started to have an allergic reaction to the vancomycin, and my entire outer layer of skin peeled off in sheets. Without that protective layer of my skin, I was vulnerable to further infections and needed to stay at home. I was in and out of consciousness for most of this time.

Ultimately, after several bouts of antibiotics and multiple surgeries, my MRSA infection cleared. But my body was completely wrecked. My muscles were so weak that I had to undergo physical therapy to get back to normal, and walking around the block became a milestone. The entire ordeal lasted four months, and we racked up $300,000 in medical costs. Without insurance and the support of our community, we could not have survived financially.

People from our neighborhood and church bought us groceries and mowed our lawn because we had no time to do it. One very generous family even paid the monthly mortgage payment on our home. It scares me to think about what could have happened to our family without this kindness. You can get a little infection like this and be in the hole financially for the rest of your life, or worse. There are an estimated 72,444 MRSA infections and 9,194 related deaths each year in the U.S.

The experience changed our lives in a profound way. We still embrace traditional medicine when needed, but our family practices more alternative medicine now. My daughter had her appendix removed, and I was scared throughout the surgery. I don’t want my children to go through what I went through.

I’ve also become an advocate for the cause. In August 2006 I became a chef at Overlake Medical Center in Bellevue, Washington and I realized that I had a unique opportunity to address this issue head on. I began intensively studying the use of antibiotics in food production, which is one of the contributors to bacteria resistance. I was able to develop a new purchasing policy at the hospital so that we now only buy food from producers who are committed to reducing antibiotic use. We’ve gone from 19% of the meat we serve being classified as “reduced antibiotic use” in 2012 to 80% last year. In April, I joined the Pew Charitable Trusts’ Supermoms Against Superbugs initiative and met with policymakers in Washington to encourage them to make antibiotic resistance a priority. Currently, our country is headed full bore toward a post-antibiotics era.

Thankfully, I’ve been able to fully recover from my infection. I even made it my goal to complete a bike ride from Seattle to Portland—which I did about a year after my infection. Today the only physical evidence of the trauma are the scars on my leg and the fact that I still don’t have my ACL in my left knee. Now I have a story to tell, and I tell it as often as I can to warn people about superbugs. I don’t want anyone to experience what I did. I know I got lucky. 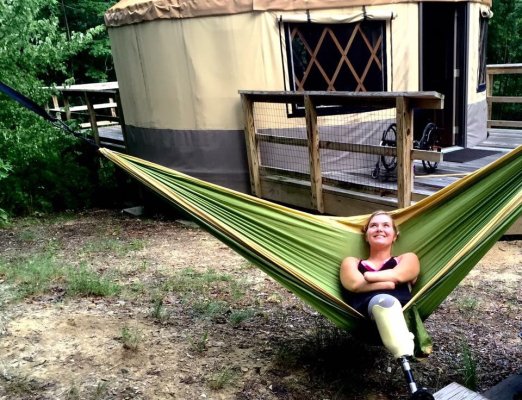 I Survived Flesh-Eating Bacteria—and It Changed My Life Forever
Next Up: Editor's Pick