Victim of Anti-Muslim Attack Thanks Men Who Died Saving Her, Pleads for Privacy

A heart-shaped wreath covered with positive messages hangs on a traffic light pole at a memorial in Portland, Ore, on May 27, 2017.
Gillian Flaccus—AP
By Alana Abramson

The mother of one of the girls who was allegedly harassed with racial slurs in Portland last week posted a video on social media thanking the two men who were fatally stabbed protecting her.

“We’re just here to say thank you,” Dyjuana Hudson said in a video on her Facebook page, accompanied by her daughter, Destinee Mangum. “We’re very appreciative of what’s being done for us.”

She explained that the family will come forward “when the time is right,” but that it’s too difficult to keep reliving the incident.

Hudson’s daughter said in the video that the best thing people can do for her right now is give her family privacy while they process the attack.

“It will probably be easier if you guys don’t contact family, or my mother, or even me,” she said.

Hudson had posted a tribute on her Facebook page to Meche on Saturday. “You will always be our hero,” she wrote. “I’m soooooo sorry this happened… You didn’t even know my girls but you stepped in and saved my babies life.”

Hudson had previously told the Oregonian that her daughter had been on the train with her friend who was wearing a hijab, and that Christian had been shouting hate speech at them.

“He was saying that Muslims should die,” she told the Oregonian. “That they’ve been killing Christians for years.”

Christian is currently being held without bail on various charges included aggravated murder, according to police. He is set to be arraigned on Tuesday. 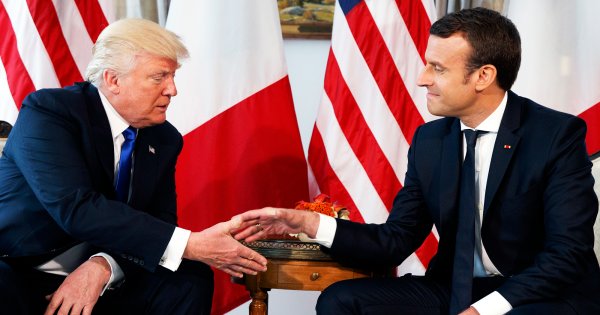 A History of President Trump's Awkward Handshakes
Next Up: Editor's Pick