Tom Martin is the construction manager who’s overseen Game of Thrones‘s sweeping practical sets—from Riverrun’s massive drawbridge to the elevator at Castle Black, specially built for the show. When I was in Belfast in January for my cover story on Game of Thrones (whose new season premieres July 16), Martin spoke to me about his favorite sets—and the massive scope of the show. Here’s an edited portion of that conversation.

Tell me about some of your favorite sets you’ve constructed.

We had a production meeting when we got the scripts for season 6—the siege at Riverrun, it’s described as “a drawbridge comes down over the river.” Reading the script and we go to the production. We had this meeting and brainstorm, what will we do about this. It just came to me in the meeting, to be honest: Why don’t we do it down at our Banbridge studios. The river Bann runs through the edge of the lot [and] is 80 foot wide. Why don’t we do it for real? We’ll dam part of the river and we’ll do the drawbridge and do it all for real and build the castle in the car park and crane it over and drop it into the river.

They all looked at me, and after I said it all, I thought, well, that probably wasn’t a good idea. The next day we went on a reccie [reconnaissance trip] down there to look at where we could possibly position it. I knew there was a fantastic field on the other side of the river with a great big hill on one part of it. It’d be ideal for the siege, for thousands of troops to be camped out and war machines being built and all that type of thing happening on the other side. We had a look at it and everybody loved the location and my assistant construction manager, Danny, came with me. We got down there about an hour before everyone else just to see what we’d got ourselves into, and we look at the river and it is just flowing so fast. Danny looks at me and says, “What did you open up

How long did the build end up taking?

The overall build, which is a considerable build, there’s two main parts to it. The damming of the river and building an actual drawbridge that worked. It all had to be done with steel and clad in thousands of tons of huge old timber, salvage timber where we could. Where the drawbridge came down, it then had to meet a bridge at the other part of the river which then led down into the field to make it comfortable for the horses to ride up onto it. So while that was happening, we were building a complete courtyard up in Riverrun on the riverbank. While those two elements were happening, we built a huge scaffold in the car park and built the facade of the castle 50 foot high onto a steel frame. So we plastered it there, painted it there, did all the aging on it, and literally lifted it over and craned it in position.

It takes about 18 weeks in total from the first drawing to completion. We average around 70 to 80 sets a season. And none of them are small.

At the moment the drawbridge is in its up position for safety and security, we don’t need it. The rest of the bridge, where it lands, and the central buttress is in the river. Before we could start any of that, there were several meetings with the water authorities, with railway heritage, because we were going to land on part of an existing stone buttress, we had to get permission from them. We had to remove part of the buttress, so we numbered every stone and videoed it coming down, and this year we’ve got to reinstate that. You don’t leave a speck of timber, nothing. The ideal thing is like leaving a beach, leave only your footsteps, nothing.

Wasthere another build as challenging?

The battle of Blackwater Bay, that was a substantial build. We built all of the ships here on the quarry, one hour from here, and we used an existing lake in the quarry. For that scene, the director came up with an idea of how to attack the doors with a battering ram. We’ve got a skiff, a boat that can take about 16 men and in that boat are these big ribs that come up they look a bit like whales ribs and hanging from the whale ribs is a huge battering ram with a lion in front of it. The idea is that they row up to the shore, they pull the boat onto the shore, they flip it over and hang the battering ram underneath it, so when they’re at the front door and the oil’s been thrown down on top of them, they can hit the door without being hit by the oil or the arrows. So we came up with this idea and then we had three and a half weeks to build a boat from scratch that would float and was light enough that a number of guys could flip upside down and run with. And we had no time to test it. The first time we went in the water was the day before the shoot. Like any boat, it goes into the water and goes dunk, da-dunk, and comes back up again. And it worked! So that was a fantastic moment.

Another example was Castle Black. In the story, there’s obviously a lift that goes 800 foot up the height of the wall. We’re all talking about how we’re going to do this, and the first thought is, obviously that’s going to be a visual effect. And I said at the meeting, well, maybe not. Maybe we could do it for real! We’ll buy a building site lift. A hoist. Go up the outside of a building. We’ll completely take the base apart, and rebuild it in timber and forged metal. And we’ll put the rails going up the 100 foot, the levels of the quarry. We built Castle Black at one plateau of the quarry and it was actually 90 foot of quarry wall at one end of the courtyard. The rails—we bolted them to the quarry face, built the lift for real and went up the 90 foot and at the top of that plateau, built the exit onto the top of the ice wall. So the whole thing was done for real and visual effects for the wide shot added in the missing piece.

What was it like watching the lift go up the side of Castle Black for the first time?

I was in it! It was great, absolutely fantastic. We were like little kids, so excited to actually get in it and get it working. And effects did one little thing where they put a chain through it and had a clicker going to get that noise—click-click-click. Because ours was all wrong [soundwise], it was electric and didn’t have the sound, you want the mechanical feel and crunch to it. Great big heavy metal doors, when you swing them open they hit the side, there’s a real weight to it. For that set we used 44 arctic loads—massive lorries of salvaged timber. Forty-four loads in that set. I was getting stuff from all over Ireland, U.K., and France. From old barns and warehouses and all sorts to get the look we wanted.

I feel as though the practical effects add a difference you can see onscreen. It has depth and weight.

Definitely. You have to have so much visual effects because of the dragons and everything else. If there’s any other elements you can do for real, we’ll do it for real. We’re definitely not afraid of sticking our neck out and saying let’s try this, we can do it for real. That comes back to not being afraid to offer something up and stick your neck out and say we can do this. 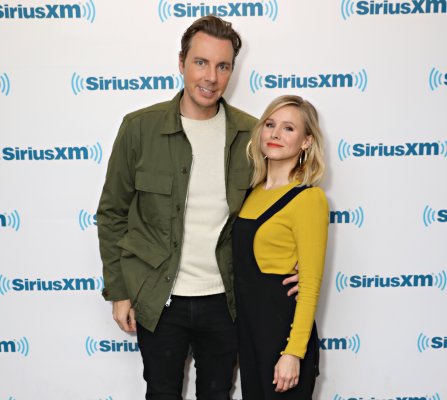 Kristen Bell and Dax Shepard Made the Nerdiest Game of Thrones Superfan Video
Next Up: Editor's Pick