By Justin Worland
This image shows Jupiter’s south pole, as seen by NASA’s Juno spacecraft from an altitude of 32,000 miles (52,000 kilometers). The oval features are cyclones, up to 600 miles (1,000 kilometers) in diameter. Multiple images taken with the JunoCam instrument on three separate orbits were combined to show all areas in daylight, enhanced color, and stereographic projection.
NASA/JPL-Caltech/SwRI/MSSS/Betsy Asher Hall/Gervasio Robles

A NASA mission to Jupiter that reached the planet last year has changed the way scientists view the largest planet in the solar system, showing polar cyclones the size of Earth and a giant “lumpy” magnetic field.

The Juno mission, which reached Jupiter after a five-year trek, provides a new perspective on the fifth planet which scientists have struggled to study because of its cloud cover. Juno’s advantage relies on an orbit that allows it to come within 3,100 miles (5,000 km) of the planet’s cloud tops.

“We knew, going in, that Jupiter would throw us some curves,” said Juno principal investigator Scott Bolton of the Southwest Research Institute in San Antonio in press release. “But now that we are here we are finding that Jupiter can throw the heat, as well as knuckleballs and sliders. There is so much going on here that we didn’t expect that we have had to take a step back and begin to rethink of this as a whole new Jupiter.”

Scientists published the results in two studies in the journal Science and 44 papers in the journal Geophysical Research Letters. Results will come as the Juno probe continues to complete orbits every 53 days. 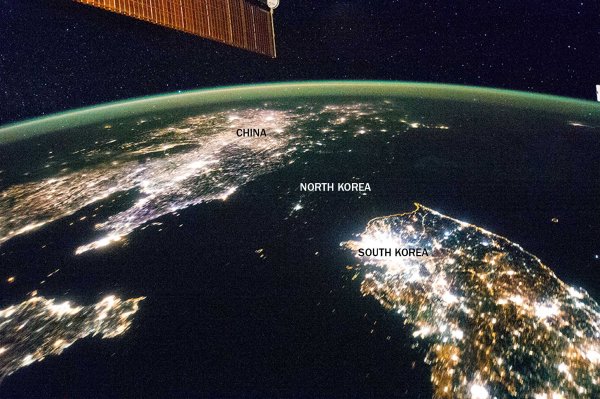 See Images of International Borders Taken From Space
Next Up: Editor's Pick