Years before there was Jackie in his life, John F. Kennedy was the greenish-gray-eyed most eligible of bachelors, privileged son of a politically connected business mogul and ambassador. Among his former girlfriends were two with whom he stayed Platonically friendly long after their romances ended. They were women of polar-opposite description — a Danish working-girl beauty, and an American blue-blood heiress — and the relationships didn’t last, but they would end up having an outsized effect on the course of his life.

On one side, there was Inga Arvad. In the pre-war years, she had been a journalist in Nazi Germany. She covered the 1936 Berlin Olympics where she sat as a guest in one of Hitler’s box seats. The Fuhrer himself described her as, “the perfect Nordic beauty.” But she fled as war broke out and settled in Washington to work at the Washington Times-Herald, where she met Jack’s sister Kathleen. By then JFK was working in Naval Intelligence, and the relationship that developed between him and Inga so worried the FBI that they started a file and surveillance.

And on the other side there was Frances Ann Cannon, daughter of a wealthy textile merchant family, who had been with JFK before the war. As he left for pre-War Europe, she wrote him the kind of over-the-top farewell that might even make one think she was ready to move on. “Great golden tears,” she said, “… stay away from the hay. Goodbye darling. I love you.” They did indeed break up but were friendly enough for her to write him in 1942, asking, “Who was that glamorous blonde you were trying to fill full of champagne for some evil purpose at ‘21’ the other night?”

JFK was off to war in 1943, and served as commander of a PT boat, an 80-foot speedboat with side-mounted torpedoes designed to race around and harass the powerful Japanese Navy. The Solomon Islands were a long way from the nightlife and dating scenes he knew at Harvard, New York, Cape Cod and London. On one South Pacific night so dark you could hardly see your hand, with Jack at the helm at idle speed, an enemy destroyer came out of nowhere and rammed his PT-109, splitting it in two, instantly killing two of his crew. The rest paddled floating wreckage to shore, Jack separately towing the most injured of them as he swam for three-and-a half miles to a deserted island beach.

The story of how they survived the wreckage and stranding would eventually establish JFK’s reputation as a war hero, a reputation he would carry with him all the way to the White House. But it’s easy to see how, while his work to save his crew in the aftermath was without doubt heroic, the tale on the whole was open to interpretation. After all, he had been at the helm when the boat drifted into the path of an enemy ship. That he ended up a war hero was in no small measure a public relations victory, substantially aided by those two ex-girlfriends.

While overseas, Jack had kept up correspondence with Inga and Frances both. To Inga he wrote from the South Pacific, “If anything happens to me I have this knowledge that if I had lived to be a hundred it could only have improved the quantity of my life not the quality … Knowing you has been the brightest point in an extremely bright twenty-six years.”

Jack made it home by 1944 and upon arriving in San Francisco, paid a visit to Inga, who had relocated there and continued working as a news-service journalist. He told her of his adventure at sea and the sinking of his PT boat. Inga promptly turned it into an article about “the skipper hero,” that appeared in the Boston Globe, Pittsburgh Post-Gazette and other newspapers. She made no mention, however, of her personal interest in the subject.

Then Jack headed home to the East Coast, with a stop in New York City. There he met his other ex, Frances Ann Cannon, for dinner, this time accompanied by her new husband, journalist John Hersey. Hersey would go on to a brilliant career in journalism and fiction, including a Pulitzer Prize for his novel, A Bell for Adano.

That night in 1944, Jack told Frances and Hersey his war story. Hersey was as taken by it as Inga was, and wrote a memorable account of JFK’s adventure for the New Yorker, creating a wonderful tale not just of war but of man against nature. Later, the Reader’s Digest version of the Hersey article would be reproduced by the thousands as campaign literature for Jack’s 1946 first run for Congress. Kennedy’s father, Joe Kennedy, whose fortune was built on banking and Hollywood movie-making, knew something about how to run a modern publicity machine — and he knew that war story was could be crucial to his son’s run.

Thus did JFK’s still-warm heart for failed romantic interests lead to the making of great American political mythology. The story of PT-109 was so central to his presidential campaign narrative that PT-boat tie clasps became standard accoutrements of campaign workers. It was so much a part of JFK’s persona that after his assassination, his brother Robert, standing with Jackie at his open casket, slipped his PT-109 clasp off his necktie and placed it inside.

Frances Ann divorced Hersey in 1958. Oddly coincidental was John Hersey’s whereabouts at the time of JFK’s death. Kennedy had been offered a prestigious literary arts award by a New Hampshire library, but it required that the recipient accept in person; because the president’s travel schedule in November 1963 was too full, it was offered instead to John Hersey, who accepted it on Nov. 21, the day before Kennedy died in Dallas.

Meanwhile, though she was a journalist, after his death Ingrid never wrote about Jack for publication and, like Frances, declined interview requests. Ingrid learned of his shooting on the car radio, and of his death at home on TV, according to a recent biography of Ingrid by Scott Farris. Her son remembers she silently moved to her bedroom, shut the door and wept for hours.

James W. Graham is the author of Victura: the Kennedys, a Sailboat, and the Sea. 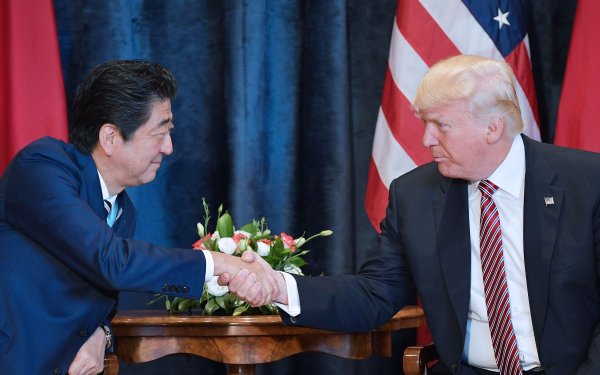 Trump Says North Korea Is a 'Big Problem'
Next Up: Editor's Pick