'Only Thing I Care Is God, She Is Safe.' Father of Girl Pulled Into Water by Sea Lion Speaks Out

The father of a young girl who was captured in a viral video being dragged into the water by a sea lion praised the girl’s grandfather as a “hero” for jumping in to save her as he counted the family’s blessings for her safety.

A sea lion bit down on the back of the six-year-old girl’s dress, pulling her into the water moments after she sat down on a perch at a Canadian dock. The girl’s grandfather immediately leaped in after her, and relatives pulled both of them safely out of the water.

“If he had one- or two-second doubt about that, my girl could have been gone by then. That reaction makes him a hero,” the girl’s father told the Canadian Broadcasting Corporation, which did not name him to protect the girl’s identity.

“Only thing I care is God, she is safe. God, I didn’t miss out anyone from my family at that moment,” he added. “I could have gone organizing a funeral by now rather than doing interview.”

The father said his daughter was shaken but relatively unscathed. She suffered a small wound to her lower back and was prescribed antibiotics, he told CBC. He said his family was not feeding the sea lion but acknowledged his daughter got too close to it.

“My daughter went to the front to try to see the sea lions, to get a closer look,” he said. “That’s a lesson she took and she has taken that lesson in a hard way.” 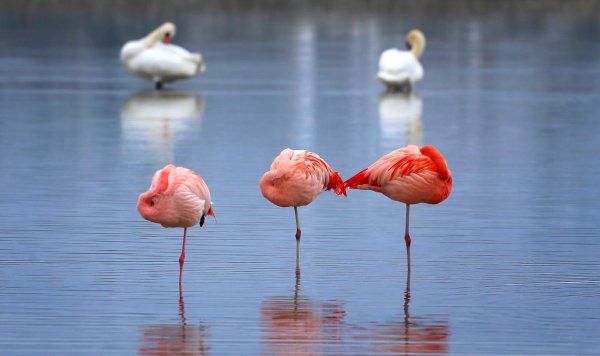 Science Discovered Why Flamingos Stand on 1 Leg
Next Up: Editor's Pick