Republican Congressman Trey Gowdy was just trying to help. But as they have for weeks, attempts to defend President Trump against the accelerating investigation into possible collusion between his campaign and Russia just seem to make things worse. At a May 23 House Intelligence Committee hearing into the Russian operation against the 2016 presidential election, Gowdy asked former CIA chief John Brennan, who stepped down on Jan. 20, whether he had seen any “evidence of collusion, coordination [or] conspiracy between Donald Trump and Russian state actors.”

If Gowdy thought Brennan was going to distance the President from the spreading scandal, his move backfired. “I saw information and intelligence that was worthy of investigation by the [FBI] to determine whether or not such cooperation or [collusion] was taking place,” Brennan said. When pressed by the retreating Gowdy on whether he meant Trump in particular, Brennan said he wasn’t referring to “any individuals” but wouldn’t rule Trump out, either. The damage was done.

For Trump, his aides and his allies in Congress, the investigation into Russia’s election meddling gets worse by the day. The leaks about the probe are bad enough, with suspicion moving daily closer to the President. But as Republicans scramble, ad hoc, to counter the constant revelations, much of the damage has been self-inflicted.

FBI and congressional investigators are reviewing 18 previously undisclosed phone and email contacts with Russian officials by Trump’s then national security aide, Michael Flynn, and other campaign officials, Reuters reported. And the FBI probe has reached the highest levels of government, the Washington Post reported shortly afterward, with a current senior White House official now a significant person of interest in the case. Among the key issues investigators want to ask the unidentified White House official about: collaboration on Russia’s influence operation against the election.

Unforced errors haven’t helped. A day after Trump fired FBI Director James Comey, nominally for mishandling last year’s investigation into Hillary Clinton’s emails, the President told the visiting Russian Foreign Minister and others that he had axed Comey because of the Russia probe, the New York Times reported 10 days later, on May 19. Then, on May 22, the Post reported that Trump had asked his Director of National Intelligence, Dan Coats, and his National Security Agency chief, Admiral Mike Rogers, to pressure Comey to drop the FBI probe back in March.

Those revelations have worried Republicans facing re-election in 2018, and make a new investigation into possible obstruction of justice by Trump more likely. Trump has hired Marc Kasowitz, a lawyer who handled divorce and libel issues for the real estate mogul in New York City, to represent him in the Russia matter, in what Republicans hope is a sign that the President is beginning to realize he can’t bluster his way out of the mess. Administration officials are attempting to impose order on the White House handling of the probe by instituting a separate communications and decisionmaking operation to manage it.

But the real danger for Trump, ultimately, comes from an investigation that has its own momentum. Far from being the “witch hunt” that he has decried, it is moving with cold efficiency under the leadership of newly appointed special counsel Robert Mueller. Investigators have reportedly issued subpoenas for documents and are preparing to interview key players, a sign that the FBI is making tangible progress under the oversight of the courts.

Which means any discipline by Trump and the White House may be little help. Brennan made that clear when Republican Congresswoman Ileana Ros-Lehtinen asked him at the May 23 hearing about previous Russian attempts to influence U.S. elections. As a young analyst at the agency, Brennan said, he had seen Russian spies trick Americans into colluding with them but that “frequently, individuals who go along that treasonous path do not even realize they’re along that path until it gets to be a bit too late.” The question only investigators can now answer: Just how late is it?

–With reporting by ZEKE J. MILLER and MICHAEL SCHERER/WASHINGTON 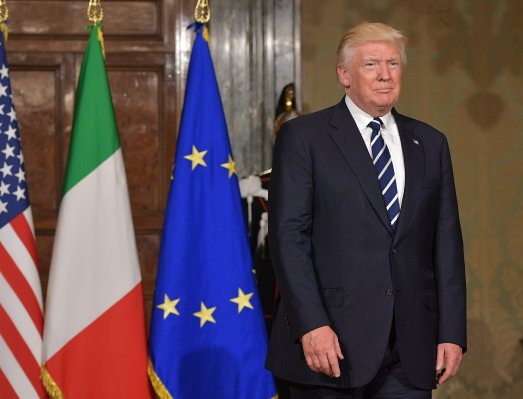 54% of Americans Believe Trump Is Abusing Power
Next Up: Editor's Pick