John F. Kennedy's America Answered a Call to Leadership No Longer Given Voice

These are words hard to imagine writing, or reading: John F. Kennedy was born a century ago. One hundred years is a meaningful milestone, a distance at which even youth seems somehow antique. The concept doesn’t square with the unlined Kennedy face, the chestnut hair, the saddle-shoed children, the fluorescent grin. Frozen in time by tragedy, forever young, Kennedy eludes the prison of the past to remain a vibrant symbol of a time when the U.S. felt strapping and full of purpose.

In another sense, though, the Kennedy centennial has arrived with impeccable timing. Although he lived to see less than half of it, Kennedy was an epitome of 20th century America. And there are many reasons to feel that the so-called American century, the Kennedy century, is finally over.

He was born in 1917, a few weeks after the U.S. entered Europe’s Great War. This bloody-minded conflict had been tugging at the sleeve of Uncle Sam for years, trying to pull him into the maelstrom that was the beginning of the end for imperial Europe. America did not want to go, did not care to be snared in what George Washington had called the “vicissitudes” of great-power politics.

But it happened, and the years of Kennedy’s sickly boyhood–which found him in and out of hospitals, emaciated by illness and toughened by pain–were consumed by an intense debate over whether such a thing should ever happen again. Kennedy’s father, the rich and insatiable Joseph P. Kennedy, was among the leading voices against America’s further involvement in Europe’s crises. As the conflagration that would be World War II took shape in Berlin and Rome and Tokyo, the son watched from a front-row seat as his father, Washington’s Ambassador to the U.K., struggled to keep the U.S. on the sideline.

Kennedy’s childhood and America’s reticence ended in the same transformational furnace. The young man connived his way past Navy doctors to earn command of a PT boat in the South Pacific, and when that boat was sunk by the Japanese and the injured Kennedy managed to bring the 10 crewmen who weren’t immediately killed to safety, he became a hero. The story of PT-109 launched the political career that fell on Kennedy’s shoulders after the combat death of his charismatic older brother Joe.

The war remade the U.S. as well. The leading economies of Europe and Asia were decimated, while the economy of the U.S. had been rescued from the Depression and turbocharged. The vestiges of the European empires crumbled, while the zone of U.S. influence swelled. A country that had resisted the world stage suddenly dominated it.

You see these two creations–John F. Kennedy and the American superpower–rising together, feeling their way forward through the late 1940s, growing into a shared determination to meet the challenges and opportunities opened by the cataclysm of the war. Before the war Kennedy talked of being a history professor in a book-lined study; now, as a Congressman and then U.S. Senator, he radiated an ambition to be President.

When he won that office in 1960, he went to work on an Inaugural Address that would bring all of this into focus–the fact that a people shaped by their tumultuous century would seize the moment offered by history, a responsibility vast and weighty, full of danger and promise. The unforgettable passages still ring of authenticity: they were the right words at the right time from the right man.

“Let the word go forth from this time and place, to friend and foe alike, that the torch has been passed to a new generation of Americans–born in this century, tempered by war, disciplined by a hard and bitter peace, proud of our ancient heritage … Let every nation know, whether it wishes us well or ill, that we shall pay any price, bear any burden, meet any hardship, support any friend, oppose any foe to assure the survival and the success of liberty.”

He was a tough, glamorous, relentless man representing a tough, glamorous, relentless nation, a union of a man and a moment so apt that his brief presidency, which was marked by appalling failures to go with his inspiring triumphs, still stands out from the background of history. No other President who served so little time in office is remembered with such intensity and passion. Part of that, it must be said, was the incomparable shock of his murder, in broad daylight, with a camera rolling. But just as important was this window he opened onto his nation.

To look at Kennedy and to study his presidency is to glimpse America coming to grips with the nuclear age, waking up to the moral imperative of civil rights, fumbling with the dirty business of counterinsurgencies and regime change. He encapsulates the giddy conviction that Hey! America can do anything!–a notion that produced both the moon landings and the Vietnam War. Kennedy is the high before the lows of Watts and Watergate and Whip Inflation Now; the buoyant marker of a fleeting hope that the laws of historical gravity might be suspended, if not revoked outright.

The nation at Kennedy’s centennial is a different place, looking inward instead of outward, stepping back from the world instead of toward it. America is led by a generation of politicians who grew up in the relative peace of the postwar order, answering to an electorate more exhausted than energized by the duties of a superpower.

In the White House is a man whose Inaugural Address was in many ways a repudiation of Kennedy’s. “Ask not what your country can do for you,” Kennedy demanded. Donald Trump said, by contrast, that “a nation exists to serve its citizens. Americans want great schools for their children, safe neighborhoods for their families and good jobs for themselves. These are the just and reasonable demands of a righteous public.”

Kennedy spoke of a trumpet summoning Americans to “a long twilight struggle, year in and year out … against the common enemies of man: tyranny, poverty, disease and war itself.” He spoke of “a grand and global alliance, North and South, East and West, that can assure a more fruitful life for all mankind.” He welcomed his role and responsibility, and those of his generation, as defenders of “freedom in its hour of maximum danger,” and asked, “Will you join in that historic effort?”

Trump issued “a new decree to be heard in every city, in every foreign capital and in every hall of power. From this day forward, a new vision will govern our land. From this moment on, it’s going to be America first.”

It remains to be seen, decades from now, whether this new President will be judged at his centennial to be the enduring representative of a new and insular America. Or will the nation, after stepping back, heed again the trumpet’s call and the twilight struggle? John F. Kennedy was the face and voice of an America that understood the high price of peace and freedom, and with clear-eyed determination was ready to pay it. 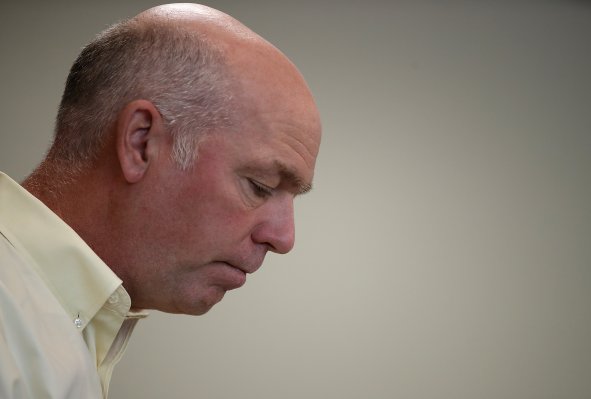