British Lawmakers Rage at the U.S. Over 'Incomprehensible' Leaks to Media on Manchester

A series of leaks on the investigation into the Manchester bombing by U.S. officials to the media has severely undermined the intelligence-sharing relationship between Britain and the United States. But British lawmakers tell TIME the alliance has to remain strong as the fight against extremism continues.

At a NATO summit in Brussels on Thursday, British Prime Minister Theresa May said she would confront President Donald Trump over U.S. leaks in relation to the Manchester Arena bombing that killed 22 people, including children and teenagers, late on Tuesday night. “I will make clear to President Trump that intelligence shared between our security agencies must remain secure,” she told reporters.

In the wake of May’s statement, President Trump said he had asked the Justice Department to launch a “complete review” of these and other leaks from his government. “There is no relationship we cherish more than the Special Relationship between the United States and the United Kingdom,” he said in a statement.

British interior minister Amber Rudd had earlier objected to American officials when CBS revealed the name of the bomber, Salman Abedi. “I have been very clear with our friends that that should not happen again,” she told the BBC. But the New York Times subsequently reported a series of leaked images, including what appears to be a bloodstained detonator that was in the suicide bomber’s left hand.

The British Government and intelligence agencies believe these leaks could have undermined their investigation and even endangered lives. “That the Americans have done this is incomprehensible,” said Dominic Grieve, the Conservative Party lawmaker who chairs the powerful Intelligence and Security Committee of Parliament. “I don’t think it endangers our security co-operation with the U.S., but it is very irritating.”

Grieve told TIME the leaks are “a flagrant breach” of the ‘control principle’ — the rule that intelligence passed by one authority to another cannot be published or shared without the originator’s agreement, on which international security co-operation is based.

Anger is such that police investigating the attack in Manchester have stopped sharing information with the U.S., a move that breaks the intelligence co-operation that has been so evident since 9/11. The Special Relationship has rarely looked so rocky.

But lawmakers in the U.K. recognise they need the U.S. in its counter-terrorism efforts more than ever, because national security relations with the E.U. are at risk as Britain prepares to leave the bloc. Former Justice Secretary and Labour peer Charlie Falconer says: “We’ll be looking to America [for help] as an ally, whatever people think of Trump, and have common cause with America.”

The U.S. and U.K. have had an extremely close intelligence sharing relationship under the “Five Eyes” alliance comprising the U.K., U.S., Canada, Australia and New Zealand. The five Anglophone countries share signals, military and human intelligence.

This global co-operation is particularly vital given so much terrorism is now plotted through the internet, which pays no heed to geographic borders and much of which is run by U.S. internet service providers [I.S.P.s]. Malcolm Rifkind, a former foreign secretary who was Grieve’s predecessor as chairman of the Intelligence and Security Committee, says: “Terrorists now function through the internet. One of the two men who murdered Lee Rigby [a fusilier who was killed while off-duty in London four years ago] got in touch with a known terrorist in Yemen through Facebook. They discussed murder but never physically met.”

The vast improvements in intelligence-gathering and security make highly planned operations like the July 7, 2005 bombings in London more difficult for extremist groups to carry out, he says. Instead, “they’re using indoctrinated individuals as dupes.”

Hazel Blears, a former cabinet member in the Labour Party who also sat on Rifkind’s committee, adds: “Social media companies as good corporate citizens have a responsibility to aid us [against terrorism].”

Blears also wants the U.S. to adopt a system similar to the U.K.s Prevent program. This is a counter-extremism strategy that has reportedly seen thousands of people, including children aged 10 and under, referred to anti-radicalization progams. Rudd said on Wednesday that Prevent has stopped 150 people from travelling to fight with extremist groups in Syria.

This plan may not be welcomed by human rights groups and Muslim leaders, however, who believe Prevent has turned communities against each other as teachers are legally obliged to report students at risk of extremist activity, and doctors report patients.

David Richards, who was the head of the British armed forces in 2010-13, wants the U.S. to establish an international umbrella organisation dedicated to fighting militant jihadism. “The attack [in Manchester] does emphasise the need for a new compact,” says Richards. “An overarching international and integrated national strategy to deal with the causes and symptoms of militant jihadism. We need this compact, because we’ve yet to recognise the true depth of threat we face from militant jihadism.”

Indeed, Richards believes Trump was “feeling his way towards something like this” during his recent trip to the Middle East. In a speech to the Arab Islamic American summit in Riyadh, Saudi Arabia on Sunday, Trump said his “goal is a coalition of nations who share the aim of stamping out extremism”.

Keith Simpson, a military historian and a Conservative lawmaker, is dubious, believing Richards’ plan could become a “vast talking shop”. Five Eyes is working sufficiently well, he says. “That’s a very, very close relationship that has grown even closer over the last two or three years. At agency level, we’re already very close with the U.S. and Canada.”

British lawmakers, though, will hope that trust is not undermined again given they now need the U.S.’s help in the fight against terrorism more than ever. 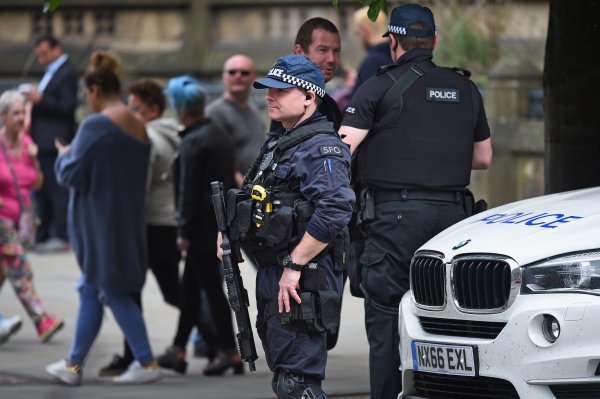 Britain's Theresa May to Confront Trump on Manchester Intel Leaks
Next Up: Editor's Pick