Britain's Theresa May to Confront Trump on Manchester Intel Leaks

British Prime Minister Theresa May said she will confront U.S. President Donald Trump over intelligence leaks by American officials when they meet at a NATO Summit in Brussels on Thursday.

“I will make clear to President Trump that intelligence shared between our security agencies must remain secure” May said after an emergency meeting with senior ministers.

British police have reportedly stopped sharing information about the Manchester Arena attack with the U.S. after a series of leaks to the media sparked anger among U.K. law enforcement and government officials.

U.K. authorities were “furious” after photos appearing to show the aftermath of the attack, which killed 22 people and injured 64, appeared in the New York Times on Wednesday, the BBC reports. The images appeared to show remnants of a backpack and possible pieces of shrapnel.

“We are furious. This is completely unacceptable,” an unnamed British government source told the BBC.

The leaked photos came after U.S. officials disclosed the identity of the suspected bomber before he was officially named by U.K. authorities. The suspect — 22-year-old Salman Abedi — was identified as the suicide bomber in various media outlets, who cited U.S. officials as their source.

The “unauthorized” disclosure was described as a breach of trust that could have undermined a “major counter-terrorism investigation,” the U.K.’s National Police Chiefs’ Council said in a statement.

“We greatly value the important relationships we have with our trusted intelligence, law-enforcement and security partners around the world,” the statement said. “When that trust is breached it undermines these relationships and undermines our investigations and the confidence of victims, witnesses and their families.”

Manchester’s Mayor, Andy Burnham, said in an interview late Wednesday that the flow of information “troubles” him. “I made known my concerns about it to the U.S. ambassador,” he told BBC Newsnight. “The British police and security services need to be in the lead when this is a live investigation,” he added.

Eight men have now been arrested in connection with the attack, including Abedi’s brother. His father and younger brother have also been detained in Libya. 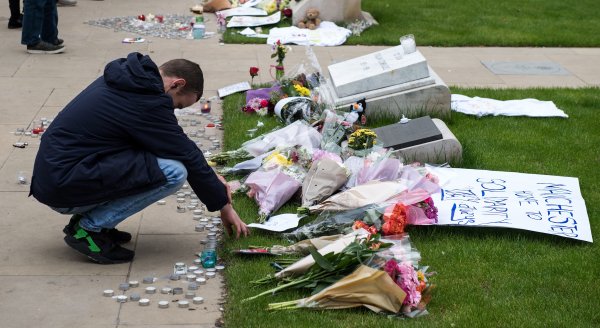