Yes, Game of Thrones Has a Horse Mistress. And Yes, She’s a Badass

A medieval world relies on horses — and the woman who’s trained them. Camilla Naprous is horse mistress for Game of Thrones; part of the stunt horse company The Devil’s Horsemen, she provides the equine component of a show that increasingly hinges upon great horseback battles. Naprous, who recently worked on the Emma Stone period piece The Favourite, spoke to TIME for our cover story on Thrones, whose seventh season premieres July 16. Here’s an edited transcript of our conversation.

Did you get involved in Thrones from the first season?

I started a quarter of the way through the first season. I came in for two weeks to do the joust and I never returned home.

Do you house the horses in Belfast?

When they come over, yes, they live in Belfast. They’ve also lived in Croatia and Spain.

Transporting a horse from London to Belfast must be easy, relative to Croatia.

We’re about an hour outside of London. Belfast is quite simple. We drive up to Wales and get a boat from Wales over to Ireland and then drive from southern Ireland to northern Ireland. Croatia and Spain as well, we drive across. To Malta, we go where the port is and boat across to wherever they’re requested. This year we were shooting in Spain, the Southern part of Spain, it’s a four-day drive.

How do they take it?

It’s another day! It’s the same as us getting on a plane if we want to fly to L.A. or New York or wherever. It’s exactly the same. They pack up their luggage for a couple of months. Become a nomad.

How many horses are involved in Game of Thrones?

In season 5’s “Battle of the Bastards,” were all 100 working? How did you accommodate them all?

Yes, they are, because they’re also doing lots of other movies at the same time. They’d just got off Exodus, the Ridley Scott movie. “Battle of the Bastards” was great. If we have over 30 to 40 horses, we stable everything on the location, so we cut down on the horses’ time that they work. They have the hotel on-sight, which helps on their rest times, so when they shoot they just go right back to bed. Otherwise they have to travel and it’s not fair on them. So it’s much easier having everything based on the location itself. We had a whole horse village-slash-camp at “Battle of the Bastards” for two months.

We have a bunch of stables, and then we have big marquees, because we have the pack that they wear, all their dressings, their costumes need to be housed. We had 60 grooms looking after it making sure the horses are all taken care of.

You’re not able to be in the shot to interact with the horses, so they’re dealing instead with the actors who are riding them.

I teach all of the actors. That’s my main passion, actually, teaching people to ride. It’s such a short time, so it’s really nice to see the guys who really get on with it. Kit [Harington]’s fantastic on a horse, Nikolaj [Coster-Waldau] is wonderful on a horse, and it’s lovely because they have the passion for it and they get it like I get it.

Do the actors have different styles of riding to suit the character?

On “Battle of the Bastards,” you had horses falling—

Seven fell over at the same time. They’re all trained to fall. I have [about] ten horses whose specific job is to come out and fall over. They’re veterans of the movie industry. One of them, I think he’s fallen over about ten episodes now. He keeps on reappearing!

How would you compare Game of Thrones to a movie set?

We just shot Wonder Woman. That was interesting. The beach was nice rather than going to Belfast. We shot it in the Amalfi Coast. I got back in costume for once! With all the Victoria’s Secret models, I was like, Wow! Better get in shape!

Game of Thrones takes six, seven months a year and you pack your bags and off you go. When we work on location, we work six days a week, so there isn’t any respite from it. I work on some big, big movies and Game of Thrones is going head-to-head with the movies, if not more. Game of Thrones, the budgets are bigger than the movies, I have more toys to play with, more horses to play with. It’s interesting, because people do go “It’s a TV show” — and actually it’s not. If you look at the big feature films that are being made and you put the comparison, they really are setting the bar so high.

David Benioff and D. B. Weiss, the showrunners, told me that early on they couldn’t do everything they wanted to do, and now they can do a lot more. You must have seen that progression.

And everything has to work flawlessly together.

And we choreographed the whole battle beforehand, Miguel [Sapochnik], the director, came and would show up at rehearsal, and he learned you do need to learn how the horses move and how you shoot them. Because if you haven’t shot them before —t hey’re not the easiest things in the world. Especially a battle.

Do horses eventually do their own thing, regardless of training?

I enjoyed it so much because we did go so full-tilt at it. Sometimes, you go on set and there’s a lot of waiting around. Miguel shot it every minute of the day he could. It’s a relief to go, OK, we have so many toys and so much money, we can actually get on camera and do as much as we possibly can. I want to achieve as much as I can before VFX comes into it.

When you say you’ve gotten more toys to play with — does that just mean more horses?

Yes! A lot more horses. Because VFX is coming more and more into our world, on average if you do a battle, you get 50, 60 horses and they can add on for the rest. It was nice they actually said, let’s get 100. Let’s match what Ridley Scott’s doing now, bring in 60-some men. Let’s challenge the feature films. And I think it’s great, and that’s what TV is doing so well. TV’s taking over where the movies aren’t. 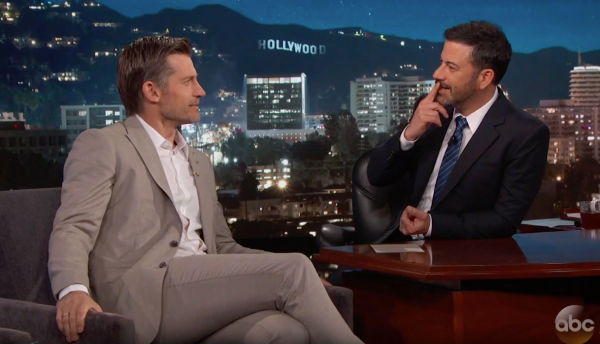 Watch Game of Thrones' Jaime Lannister Tease the Rise of 'Jon Stark-Targaryen' on Jimmy Kimmel
Next Up: Editor's Pick